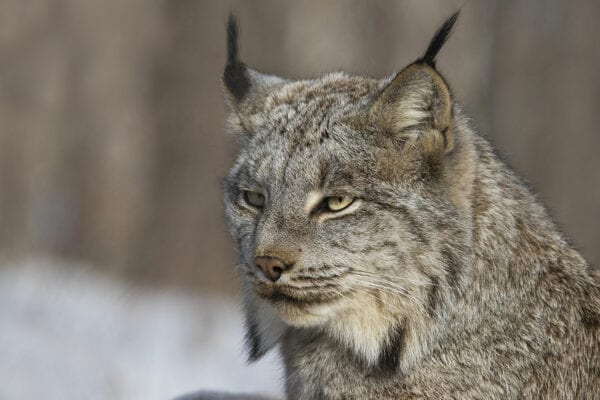 In the snowbound dawn of the Northern Forest prowls a feline shadow with shining eyes and thick, silvery fur. Her big paws and long legs allow her to move silently through the deep snow as she hunts for  hare and other prey. Long tufts of black fur grace the tops of her ears, and her short tail is tipped in black. She is the Canada lynx, a federally threatened species of the boreal forest.

While lynx are common in Canada and Alaska, in the eastern U.S. they live only in northern Maine. A lynx will hunt over a large area, ranging 10-20 miles in search of her favorite food, the  snowshoe hare. The lynx bursts upon her prey with speed and agility, using her eyes and ears to locate movement in the woods. Some may travel much farther:  biologists with the Maine Department of Inland Fisheries and Wildlife have tracked two lynx that roamed from Clayton Lake to the eastern end of the Gaspe Peninsula in Quebec, a distance of almost 350 miles.

Usually solitary, the lynx will mate with a male in late winter and give birth to a litter of one to five kittens later in the spring. The young cats will remain with their mother until the following winter.

Because snowshoe hares make up about 75 percent or more of the lynx’s diet, lynx populations fluctuate as the number of hares changes. Timber harvesting practices can either enhance or destroy habitat for lynx and hare, both of which prefer snowy, coniferous woods, including regenerating forest areas.

Lynx once roamed through all of Maine except for the coast, but over the last century they have retreated from southern parts of the state. The state banned trapping for lynx in 1963, and no one knows how many of the elusive  ghosts cats currently reside in Maine. Because there are fewer lynx today and their habitat is dwindling, the U.S. Fish and Wildlife Service placed the Canada lynx on list of threatened species in 2000. The agency proposed including more than 10,000 square miles of the Maine  woods in a “critical habitat zone” which would require separate  review and stricter land use regulations. But after former deputy assistant secretary Julie MacDonald met with land owners, including Plum Creek, who claimed the regulation was unnecessary, the government elected not to designate Maine as critical habitat.

McDonald was later rebuked by the U.S. government for her negotiations with industry representatives, and for pressuring scientists to alter their findings about endangered species. As a result, H. Dale Hall, director of the U.S. Fish and Wildlife Service, is reconsidering the decision not to include Maine as critical habitat for the Canada lynx.

Meanwhile, the lynx persist in northern Maine, slipping through woods of spruce and fir like a silver shadow in the moonlight, unaware that her fate, and her offspring’s future, will be determined in corporate offices and the polished halls of Washington, D.C.