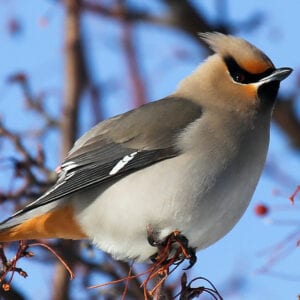 Cool Fact: Bohemian Waxwings pass berries and other objects among individuals. Some researchers believe this is a mating ritual. In this “gift passing,” as it is called, the gift may be passed between mates a dozen times or more.

For much of this winter, Maine has been graced by a beautiful bird that occurs in large numbers throughout Maine only sporadically, the Bohemian Waxwing, so named for its nomadic ways. Unlike most bird species, Bohemian Waxwings do not hold breeding territories, and in winter, they wander in search of large staples of fruits and berries.

Typically, they breed from Alaska across northwestern Canada south to British Columbia, with a few breeding records from parts of the northwestern U.S.. But in winter, when their berry supplies become scarce, they wander south, and if we’re lucky, large flocks of these gorgeous birds appear in Maine. This winter is one of those years.

Since early winter, birders have been reporting Bohemian Waxwings in Maine, and bird enthusiasts have made it a priority to go see them. It’s not only the idea of the waxwings’ sporadic visits to Maine that make them a species worth the chase. Their plumage is exceptionally beautiful. Like their smaller cousins,   the Cedar Waxwing, which occur in Maine year-round, Bohemians are so smooth and perfectly coifed that they look like they’ve been dipped in wax. But their name “waxwing” comes from the fact that the tips of their wings have colored waxy tips, a characteristic found only in waxwings. They are a dazzling combination of browns and grays, with a strong crest and striking black face mask. They have white and yellow wing patches, easily seen in perched birds. A view from below shows their distinctive rust-colored undertail coverts (in Cedars, these are white).

When Bohemian Waxwings are in the area, they are hard to miss. They are highly social and move together in tight formation as they come and go from   trees—an impressive sight to see. Flocks of several hundred have been reported throughout much of the state, from Cumberland to Brewer, from Rockport to   Waterville. Although a bird of open coniferous forests in the breeding season, during their winter wanderings, they alight in fruit trees without preference to   habitat. A flock that has been hanging around Gardiner has been enjoying the offerings of the ornamental fruits trees downtown, while a large flock in   Cumberland can be found in a local orchard.

Bohemian Waxwings have no true song—since they do not hold breeding territories, they do not need one. However, they have distinctive voices, a high-pitched, raspy seeee that is unforgettable.

Their nests, in their northern breeding grounds, consist of a bulky cup made of twigs, moss, and lichens, placed on branch near the trunk. In it, the female will lay up to 6 pale blue eggs speckled with black. But we won’t see such a nest here in Maine.

Here, our enjoyment of Bohemian Waxwings is confined to the winter months, and large numbers occur throughout the state only in years when their food   search leads them here.

We hope you enjoy this short video of clips taken of the Bohemian Waxwing flock that has been seen around Gardiner, Maine, this winter. For more images of Bohemian Waxwings and other birds, visit http://www.kiroastro.com/birds/waxwing bohemian.