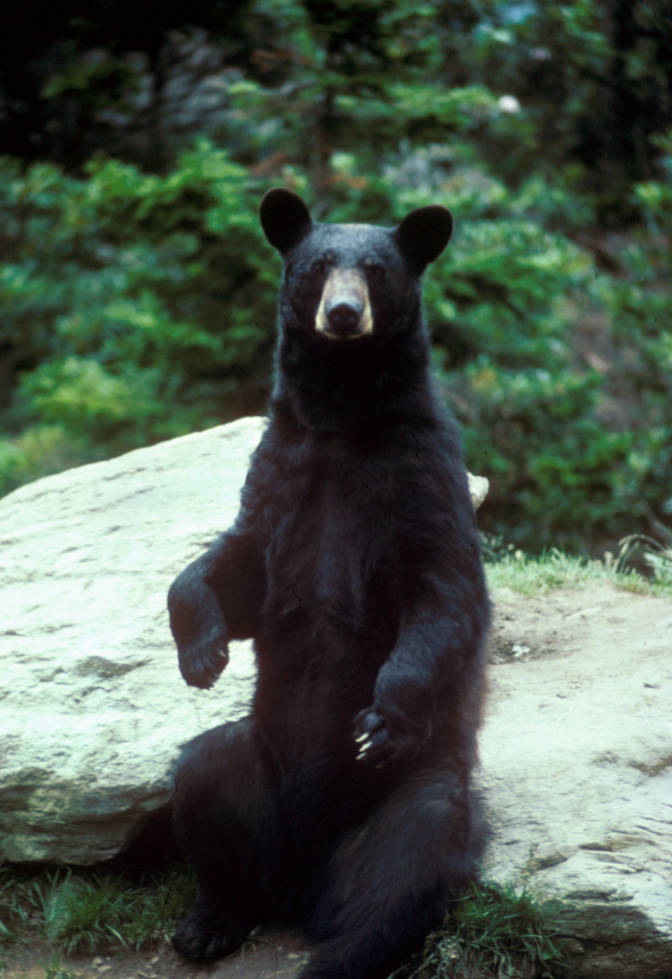 Cool Fact: Before winter hibernation, black bears eat enough food to double their weight so that they can survive the winter without eating.

The final preparations for winter are done. Food is canned, jarred, frozen, and dried. Heating fuel is delivered and stacked. Nightfall comes early and fast with a broad sweep of stars: Orion rising in the east and the Big Dipper, turned upright, is a Great Bear walking across the northern sky.

Late fall, and the constellation Ursa major, the Great Bear, is mirrored on Earth by black bears entering hibernation. They have eaten enough to double their weight: berries, beech and hazel nuts, acorns, corn scavenged from farm fields, insects, the occasional bird, small mammal, or carrion. They must store up enough fat to survive a winter without eating; pregnant females especially need body fat to provide for their cubs, who will be born in the den in early winter.

The American black bear (Ursus americanus), one of three bear species native to North America, is the only bear that lives in the eastern United States. Black bears live throughout Maine, but are more common in rural northern and eastern parts of the state. They take to the woods, second-growth mixed forest that provides protection and food. Except when breeding and raising young, they live mostly alone. According to the Maine Department of Inland Fisheries & Wildlife, females will disperse from their mother, using a nearby area of six to nine square miles. Males roam farther, up to 100 miles away. Black bears will travel distances of 40 miles or more to feed, covering several miles in a day. The Department estimates between 24,000 and 36,000 bears live in Maine. If they can make it to the adult stage, they can live a long time – 30 years – unless or until they are killed by humans.

Black bears are doing better today than in the previous century or two. Deforestation and conflicts with people greatly reduced their numbers and distribution, especially in southern and coastal Maine. While the species has rebounded as Maine’s forests have regrown, coastal populations remain isolated because the forested habitat they need has been fragmented and lost.

They will emerge, hungry, from their winter retreat in May, and immediately begin looking for something to eat, like insects and buds and new leaves of trees and shrubs. Backyard birdfeeders and grills can attract bears; this hunger becomes the hunter’s tool.

They step into the sunlight along the river bank, wander logging roads through cut-over spruce, show their cubs where blueberries grow on the slopes of Katahdin. The black bear is as much a part of the Maine landscape as the stars in the sky.

Next time you see the Big Dipper, remember the handle is but the tail of the Great Bear, visible all night long and all throughout the year. It is our symbol of the north, the long winter night, strength and persistence. During the great migration along the Underground Railroad, escaping slaves sang songs about the “Drinking Gourd,” a message to move north, following the Big Dipper, the Great Bear, to freedom.