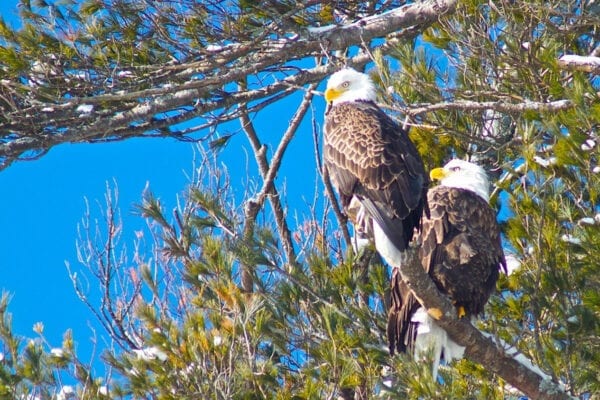 COOL FACT: Protected by the Endangered Species Act in 1978, the number of Bald Eagle pairs in Maine grew from 55 to more than 700 today.

The sheer size of Bald Eagles make them hard to miss when they’re soaring overhead or perched on a branch along a river. Adults are especially striking, with their white head and tail contrasting with the dark body. These white feathers are the origin of the eagle’s name, which comes from the Old English word “balde,” meaning “white.” It takes an eagle five years to acquire this striking plumage.

Bald Eagles can be especially conspicuous in winter, when they often congregate along open waters, especially along coastal waters that are free of ice. They can sometimes be seen by the dozens feeding in open water along large tidal rivers, or perched on frozen ice in search of discards from ice fishing shacks.

Eagles have been monitored by state and federal wildlife agencies since 1962; monitoring became more extensive and rigorous after the species was placed on the Endangered Species List in 1978. After listing, the breeding range and number of nesting pairs slowly increased throughout the state, from 85 two decades ago to more than 700 today. Among the lower 48 states, Maine ranks 8th in abundance of breeding eagles, and is the stronghold for the species in the northeastern U.S.

Removed from the Endangered Species List in 2007, Bald Eagles continue to be protected by the Bald and Golden Eagle Protection Act and the Migratory Bird  Treaty Act. Both federal laws prohibit killing, selling, or otherwise harming eagles, their nests, or eggs.

It can take Bald Eagles several months to build its massive nest, which are five to six feet in diameter and can be up to four feet tall. They place the nest in strong conifers able to withstand strong winds, usually above canopy level to allow good visibility. nest in trees except in regions where only cliff faces or ground sites are available. They tend to use tall, sturdy conifers that protrude above the forest canopy, providing easy flight access and good visibility (though, unlike Ospreys, eagles tend to place their next below the tree crown). Although built of sticks, it is typically lined with lichen and downy feathers. They often reuse these massive structures year after year, though the pair often adds more material to it. The female lays one to three eggs, which hatch in a little over a month, and fledging takes place 55-95 days later. Immature birds are dark and splotchy, lacking the white head and tail until year five, when they are mature enough to breed.

Eagles eat mostly freshwater fish. They also feed on amphibians, reptiles, and crabs. When opportunity presents itself, they will eat other birds, including  gulls, cormorants, and eiders, as well as  seasonal migratory fish like alewives. According to the Biodiversity Research  Institute, Maine Bald Eagle nestlings and adults are exposed to elevated levels of methylmercury via the freshwater food web, especially in lake habitats. Mercury is higher in the feathers, eggs, and blood of Maine eagles than in most other comparable  populations, and may be affecting reproduction.

Most Native American tribal members consider the eagle a revered creature in the animal kingdom, and the decline of the eagle and subsequent recovery have deep cultural significance. New American citizens chose it as the national emblem in 1782, because of its long life and great strength. The Bald Eagle’s majesty continues to inspire awe and wonder, no matter how common sightings of this bird may become.