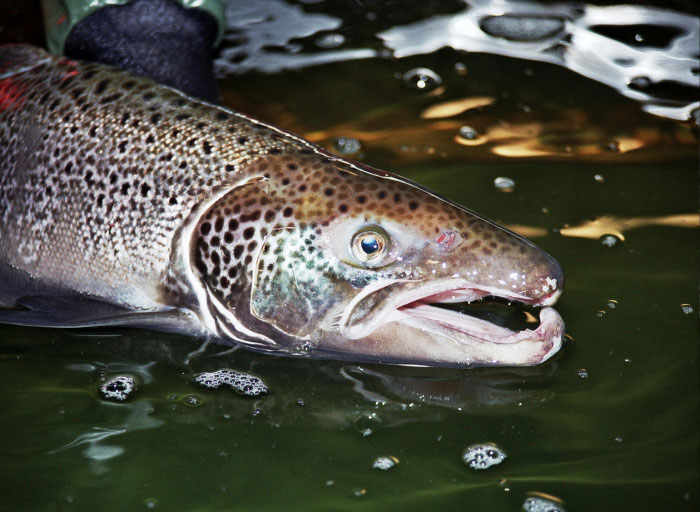 COOL FACT: As young salmon prepare to migrate from fresh water to the ocean, cells in their gills undergo chemical changes so they can tolerate saltwater, a process controlled by hormones and influenced by physical factors such as salinity, temperature, and light.

Once you hook one, you’re hooked for life, or so goes the saying among fly fishermen about the Atlantic salmon. But Salmo salar are more than stuff of legend around the rod and reel circuit. Atlantic salmon, like all sea-run fish, are important to the culture and livelihood of the region’s Native American tribes. The hundreds of thousands of salmon that once filled Maine’s rivers each spring supplied them with food and sustenance, and later supported a major commercial fishery and culturally important recreational fisheries. Salmon play a valuable role in coastal food webs. These are the reasons why many dedicated people have been working for decades to bring Atlantic salmon back from the brink of extinction.

The Atlantic salmon is an anadromous fish, which means it spends the majority of its lifetime in the ocean but returns to spawn in the same freshwater river or stream where it was born. In Maine, salmon begin returning to their home rivers between March and November, with a peak migration during June and July. Unlike their Pacific cousins, Atlantic salmon do not die after spawning, and can return year after year to reproduce.

(Landlocked salmon, a native freshwater version of sea-run Atlantic salmon, originally were present only in West Grand Lake, Green Lake, Sebec Lake, and Sebago Lake. But beginning in the late 1860s, they were distributed throughout much of Maine, and today are found in more than 300 lakes.)

Nicknamed “the Leaper,” Atlantic salmon are capable of swimming hundreds of miles inland, although in the past 200 years or so most salmon here in Maine have found their path blocked by dams. As a result, runs of Atlantic salmon are a scant fraction of their historic numbers, and the species was listed under the federal Endangered Species Act in  2000. The listing applies to salmon from eight Maine rivers: Dennys, East Machias, Machias, Pleasant,  Narraguagus, Cove Brook, Sheepscot, and the Ducktrap. These rivers are considered a “distinct population segment” of wild Atlantic salmon, genetically  distinct from the other populations that have been supplemented with hatchery-raised stock.

Multiple restoration efforts by state and federal agencies, such as the Maine Department of Marine Resources  Bureau of Sea Run Fisheries and Habitat and National Marine Fisheries Service, build on a long history of salmon research and restoration. Wild fish are supported by a tremendous hatchery effort that stocks millions of juvenile salmon in Maine rivers every year. In addition to stocking, restoration efforts focus on improving habitat and water quality, and removing barriers to fish migration.

In 2016, the Penobscot River Restoration Project was completed, vastly improving access for Atlantic salmon and other sea-run fish to nearly 2,000 miles of their historic River. The project included removing the two lowermost dams (the Great Works in 2012 and the Veazie Dam in 2013) while adding a natural, stream-like bypass to the Howland Dam (while increasing hydropower production at upriver dams so that there would be no loss of energy).

Atlantic salmon deposit their pea-sized orange eggs in “redds” dug in shallow, gravelly streambeds in autumn. The following spring, the eggs hatch into tiny alevin which stay in the gravel of the stream bed. The alevin grow into three-inch fry. The fry continue to grow, developing  dark, vertical bars along their sides as they turn into parr. Several years later, when they reach six inches or more in length, the parr begin getting ready to migrate to the ocean. As the days get longer and warmer, their bodies change as they prepare to enter salt water. They lose their parr stripes and take on the silvery shine of a schooling fish. Now called smolts, the young  salmon leave the streams where they were born and move downriver to the Gulf of Maine. The salmon that survive the  journey through the estuary make their way to the coast of Greenland, but much of their time in the ocean is a black box. Fisheries scientists are unsure what happens to them at sea, and why so few salmon return each year.

This Creature Feature was provided by Catherine Schmitt of Bangor, author of A Coastal Companion: A Year in the Gulf of Maine from Cape Cod to Canada and The President’s Salmon: Restoring the King of Fish and Its Home Waters.