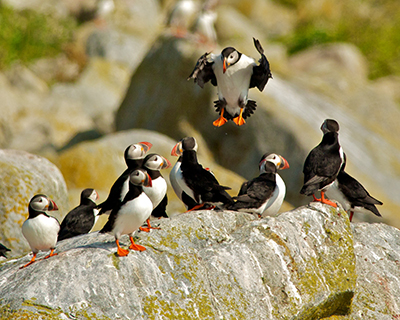 Cool Fact: Atlantic Puffins can live to be 30 years old—even older! But it takes at least three years for them to reach breeding age.

The Atlantic Puffin is among the most recognizable birds. No wonder—their black-and-white “tuxedos,” bright orange legs, and big, colorful bill also make them one of Maine’s favorites! In fact, their bills have earned them the nickname “clowns of the sea.”

Puffins are alcids, a family of birds that includes the Black Guillemot, Razorbill, and the extinct Great Auk. Here’s another cool fact: alcids fill the same niche in the Northern Hemisphere that penguins do in the Southern Hemisphere. Like penguins, alcids propel themselves with their wings in order to dive for fish, and both live in colonies. The biggest difference is that puffins fly and penguins cannot.

Atlantic Puffins breed in colonies in the North Atlantic, from the northeastern U.S. to Labrador, where, along with Newfoundland, they are the provincial bird. The species also breeds in Europe, from France’s Brittany Coast to northern Russia, Greenland, and Iceland, where about 60 percent of the world’s Atlantic Puffin populations breed.

Here in Maine, Atlantic Puffins breed on Machias Seal Island, Matinicus Rock, Seal Island, Petit Manan, and Eastern Egg Rock. This latter colony is located just six miles off New Harbor and is easily reached by boats of puffin-loving passengers and respectfully circle the island, affording great views of the birds on the rocks and buzzing in on whirring wings to bring fish to their young. According to Project Puffin data, as of 2013, more than 1,000 puffins breed on the five Maine islands where puffins have established colonies. They nest inside burrows on grassy, sloping cliffs and islands. At the nest site, puffins give a groaning call that seems out of place for a bird so cheerful-looking. In true pelagic fashion, Atlantic Puffins spend the non-breeding season far out to sea and are rarely spotted from land during that time.

Although abundant as a species overall, Maine’s puffin colonies have had, until recent decades, an unfortunate history. After being wiped out in the 1800s by hunting and the millenary trade, the Eastern Egg Rock and Seal Island populations were re-established as a result of Project Puffin, led by Dr. Stephen Kress. His techniques have helped with seabird conservation and restoration elsewhere in the world.

Although the millenary trade and hunting are no longer the threats they once were to seabird populations, Atlantic Puffins face a new challenge these days: climate change. Recent research published by NOAA found that two-thirds of fish stocks in northeastern waters, that includes the Gulf of Maine, are shifting their ranges northward or moving into deeper, cooler water. These fish species include white hake and Atlantic herring, which make up most of the puffin diet during the breeding season. There is concern that this could make the fish puffins rely upon for food harder for them to find during this critical breeding season. At the same time, warmer water species such as butterfish are becoming more abundance and larger, further affecting nesting success. Evidence of this has been documented in recent summers.