COOL FACT: Shad eggs are “broadcast” into the current and drift downstream before hatching, which means the adults must travel far enough upriver that their young do not end up in saltwater too quickly. 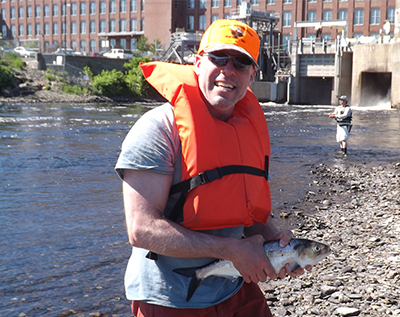 Now, ye who read these truthful rhymes,
And live in these noise-making times,
When dams, and mills, and paddle-boats
And other craft the water floats,
With all their din and clickmaclaver
Scare off the red-fins from the river,—
Can scarce conceive what schools of shad
Made our old fisher fathers glad.

What is a shad that so made our fisher fathers glad? Shad look like the “perfect” fish: forked tail, tapered body, and silvery all over, with a dark spot just behind the gill. Shad can grow longer than two feet and weigh more than a watermelon. Shad is one of Maine’s native fishes that migrate between rivers and the ocean. The shad is related to alewives, blueback herring, and Atlantic herring; it is much larger, fights harder on a line, and  tastes better than its cousins.

Fisheries biologists believe that at one time, shad probably inhabited virtually every river and tributary along the Atlantic coast of North America, from Labrador to Florida. People in the Connecticut, the Hudson, the Delaware, and the Chesapeake Bay regions are well acquainted with shad; less so here in Maine. Although shad once supported major commercial fisheries and were more abundant than salmon, stripers, or sturgeon, shad were also among the first migratory species to disappear here. Shad are sensitive to changes in temperature, light, and water flow, and are skittish about fishways. Dams and pollution quickly drove them from Maine rivers. Two centuries later, shad are benefiting from cleaner, more free-flowing rivers. They are coming back to Maine’s waters.

Shad move from the ocean in May and June, swimming up Maine rivers to spawn.

They travel inland up to 90 miles. Historically, they ranged as far as Millinocket in the Penobscot; Hiram in the Saco; and Farmington in the Kennebec. Shad spawn at night in shallow water with moderate currents. The Kennebec below Lockwood Dam and Sebasticook at Benton Falls are known spawning areas. Eggs are “broadcast” into the current and drift downstream before hatching, which means the adults must travel far enough upriver that their young do not end up in saltwater too quickly. These requirements restrict shad to larger rivers with enough flow (and no dams) between impassable falls and head of tide.

The young feed on microscopic plants and zooplankton in freshwater. They migrate to coastal areas in the fall and then live in the ocean for three to six years before returning to spawn in freshwater. No one knows exactly where they go or what they do at sea.

Adults leave shortly after spawning and head back to the estuary and then the Gulf of Maine. Northern shad will spawn again; in the Southeast they are more likely to die after spawning. No matter their origin, all the adult shad that survive convene in the Gulf of Maine to feed for the summer before spreading out along the mid-Atlantic for the winter.

Shad are great sport fish, and both their meat and roe are delicious! In Maine, the catch limit is two fish per day. There is no minimum size, but you can only use a hook and line to catch them. They prefer moving water that is not too deep. In The Founding Fish, John McPhee wrote, “Shad congregate below bridge piers, rapids, riffles, and islands, and fishermen do, too. Even a big boulder is enough to make shad stop, bunch up, and think. They collect in deep pools in the evening, and go up through rapids after dawn. Where white water flattens out, becoming slick and black on the surface of a pool, eddies tend to form on the sides. There is a distinctive seam where the southbound current and a north-drifting eddy touch. Shad cluster beside the seam, which is known as the eddy wall.”

The Kennebec below Waterville has had good shad fishing for a few years, largely because of the Edwards and Fort Halifax dam removals. Now the shad are also returning to the Penobscot and travelling past former dam sites to waters they have not seen in centuries!

We welcome them home.