Cool Fact: Many cultures consider marten to be symbolic of luck, bravery, or kinship.

The American marten, a member of the weasel family, looks less like a weasel and more like a cat with a long bushy tail and teddy-bear face. Marten are hunted for their long, silky fur, often marketed as “sable.” Their coat is brown or tan, with lighter yellowish or orange coloring on their throat and chest. 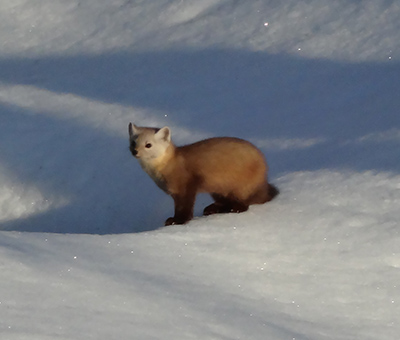 Here is how the native Athabascan people of Alaska explain the orange marking, from Myths and Legends of Alaska by Katherine Berry Judson.

Long ago a hungry marten went to an Indian camp. The Indians around the camp fire were eating salmon. Marten sat still and watched them. He was hungry and he watched this Indian and then that. Then an Indian threw at him a piece of red salmon. It struck Marten on the breast and the reddish mark is there, even to this day.

Marten live across the northern tier of North America, wherever forests are dense and full of hollow and fallen trees, which is where they are found when not looking for prey.

Marten are omnivores, eating rodents and other small mammals but also birds and berries. Mostly nocturnal, the curious marten hops about searching for voles. They chase squirrels and chipmunks through the high branches of trees (the Irish call marten “tree cats”); males will rest in the canopy, often in the clumped branches of a witch’s broom (an abnormal growth caused by rust fungi). Marten are solitary and territorial, except during the summer mating season.

Marten predators include other mammals, eagles, and hawks. Humans have pushed marten and other sylvan species out of southern New England by forest clearing and development. Maine Department of Inland Fisheries and Wildlife categorizes the marten as a “furbearer” and last assessed the statewide population in 1986. Trapping season runs from the end of October through December; each animal pelt is tagged in order to track the population.

University of Maine professor Daniel Harrison has studied marten, looking at the effects of timber harvesting on their habitat and behavior. Forest fragmentation negatively affects marten. They are creatures of thick, structurally complex woods of spruce and fir, but they can also be found in second-growth and hardwood forests. Other than trappers, people are more likely to see marten signs—a five-toed footprint, a dark curvy scat—than the actual animal. Marten play a role in Wabanaki creation stories, an illustration of our shared experience on the earth:

Kluskap was so glad for his grandmother’s arrival to the Micmac world he called upon Apistne’wj (ah-bis-ti-nay-ooj), a marten swimming in the river, to come ashore. Marten came to the shore where Kluskap and grandmother were standing, and Kluskap asked him to give up his life so that he and his grandmother could live. Marten agreed. Grandmother then took Marten and quickly snapped his neck, then placed him on the ground. Kluskap for the first time asked Creator to use his power to give life back to Marten, because he did not want to be in disfavor with the animals. Apistne’wj went back to the river and in his place lay another marten. Kluskap and Marten became friends and brothers forever. Because of Marten’s sacrifice, Kluskap referred to all the animals as his brothers and sisters from that point on. (from Mi’kmaq Knowledge in the Mi’kmaq Creation Story: Lasting Words and Deeds, by Stephen Augustine)

In Maine, people began paying attention to marten during the public controversy over forest-cutting practices in the early 1990s. The marten was likened to the spotted owl of the Pacific Northwest, where the owl’s endangered species status disrupted logging and led to protection of old-growth redwood forest. The comparison is not far off; if the forests are vast and diverse, then surely marten are present, “brothers and sisters” living their lives in and about the trees.