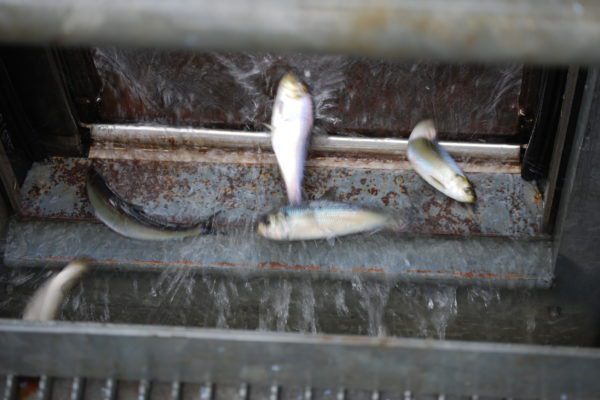 Alewives in the Kennebec River

The adult alewife is a sea-run fish about 12 inches long. Each spring, alewives leave the ocean, enter Maine’s coastal rivers, and make their way upstream  to spawning habitat in lakes and ponds. Alewives are river herring, a term that also includes their close relatives the blueback herring and American shad.

Alewives range from Newfoundland  to South Carolina. They live in large schools in the ocean, sometimes mingling with Atlantic herring, a different marine species. Sometime in early to mid-May, they surge  into coastal waters and ascend the rivers as they return to the place they were born. Bluebacks and shad arrive a bit later.

Historically, millions of alewives ascended Maine rivers, providing sustenance and livelihood to Native Americans and later European settlers. By the twentieth century, fishing, dams, and pollution had taken their toll on sea-run fish, including alewives.

Commercial harvests of river herring have decreased over the last century all along the Atlantic coast. Steep declines in herring numbers in the past few years have forced Massachusetts, Rhode Island, and Connecticut to place moratoriums on harvesting alewives and blueback herring. In 2006, the National Marine Fisheries Service placed alewives on its list of species of special concern. Commercial landings in Maine  have decreased in the last 50 years by over three million pounds, although there has been a slight increase in the last decade. In Maine, where declines are less severe, alewives are harvested commercially, mostly for lobster bait.

The Department of Marine Resources Bureau of Sea-Run Fisheries and Habitat manages populations and stocks alewives in Maine rivers, sometimes by catching the fish at dams and other barriers and trucking  them to upstream spawning locations. Alewives will use fish lifts and ladders, and so they are easier to restore to natural levels than other species. Removal  of the Edwards Dam on the Kennebec River has improved the run of alewives in that watershed. The Penobscot River Restoration project is  expected to do the same.

Restoring populations of alewives and other herring may help other species in coastal ecosystems. For example, where large numbers of migrating alewives are in rivers at the same time as young Atlantic salmon are moving downstream in spring, alewives are more likely to be eaten. As a result of this “prey buffering,” more of the salmon survive their  journey. Some fisheries scientists think that river herring may be a key component in restoring Maine’s  inshore groundfish stocks. The more scientists learn about alewives, the more  they consider them a keystone species, linking salt water and fresh, land and sea, human and earth.

Watch a movie NRCM created about the alewife migration in Sebasticook River.