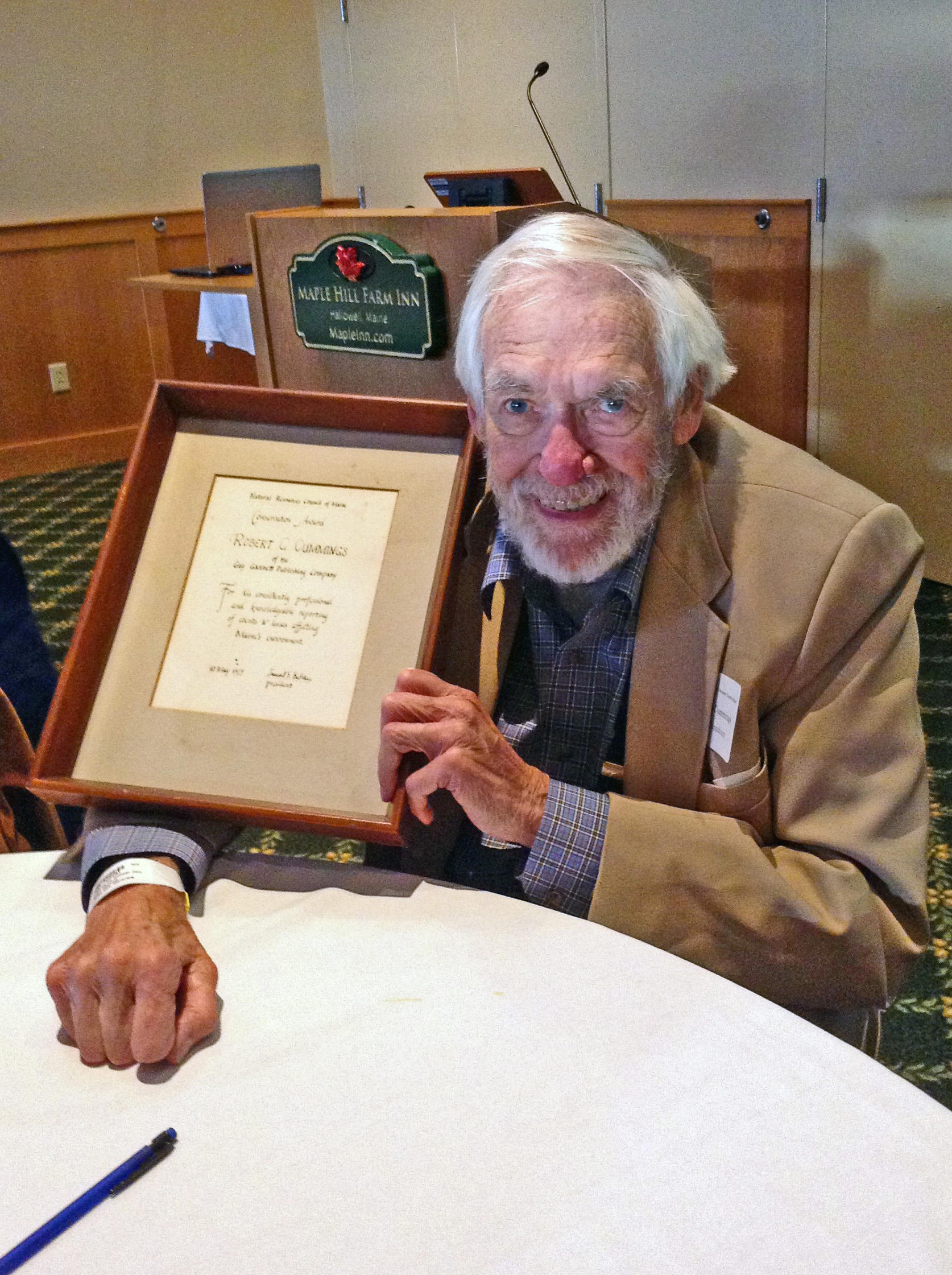 Editor’s note: This story first appeared in The Working Waterfront, published by the Island Institute, and appears here with permission.

The story that would become reporter Bob Cummings’ legacy didn’t set his world on fire when White Nichols walked into the Bath Times office in the early 1960s with a story tip.

Nichols—a Wiscasset resident who had “drifted out of the habit of earning a living,” as Cummings would later describe it—worked a variety of odd jobs and covered a lot of ground doing so. One of those jobs, he told Cummings, was as part of a survey team that helped create Flagstaff Lake as we know it today. The land he surveyed, he told Cummings, was part of the state’s “lost” public lots.

It would be nearly a decade before Cummings pursued the public lots story, but when he finally did, it would consume him for years and bring upon his head both accolades and vilification. Ultimately, the accolades prevailed and continue to this day 30-plus years later. The latest in Cummings’ long line of awards and recognitions is a Lifetime Achievement Award presented to him by the Natural Resources Council of Maine in October.

He received the award for decades of environmental reporting but also for his commitment to and passion for conservation. The list proving his dedication is long, but includes co-founding and serving as president of the Phippsburg Land Trust; hiking the Appalachian Trail and serving in leadership roles in AT-related organizations; testifying on conservation issues at the legislature; and serving as the executive director of the Maine Association of Conservation Commissions.

“He is the consummate conservationist, and the people of Maine have been the beneficiaries for decades and will be for generations to come,” said NRCM’s executive director, Lisa Pohlmann, at the awards ceremony.

When Cummings began his reporting career for the Bath Times in the late 1950s, there was no such thing as an environmental reporter. He covered a range of beats, from sports to city council meetings. He didn’t know it then, but a meeting between state biologists and Phippsburg clam diggers would put him on the road to creating the role of the state’s first environmental reporter.

At that meeting, biologists told the diggers their livelihood was pretty much over. The Kennebec River was too dirty for clams to be safely eaten and the chance that the river was ever going to be clean enough again was practically nil.

The town of Phippsburg held a special meeting to figure out what to do. Residents voted to sue the cities, towns and businesses upriver that polluted the waters and were destroying the diggers’ ability to make a living and support their families. The lawsuit never happened, but the threat of it helped to bring about the 1961 passage of the state’s first major clean water law, which ultimately became a model for the federal Clean Water Act.

In what would become a hallmark of his reporting style, Cummings pertinaciously stuck with the story, making the Bath Times, he recalls, the only newspaper in the state to seriously cover the statewide fight to clean up Maine’s waterways.

The clean water story was the first environmental story Cummings covered but it wasn’t until 1968, by then working as a reporter for the Portland Press Herald/Maine Sunday Telegram, that the environment became his official beat, and his legacy.

“What do you have for me for the Telegram this week?” Those dreaded words came from Cummings’ editor. “I thought to myself, I absolutely do not have anything,” recalled Cummings, now 86, from his home in Phippsburg. “And then I thought, let’s do a story on the public lots.”

It had been nine years since White Nichols had walked into the Bath Times and told Cummings about the public lots, but Cummings had filed the idea away in the reference library that was his brain.

His editor didn’t have any idea what the public lots were and while he considered it a “nonsense” story, plenty of readers were interested, as evidenced by the letters to the editor the paper received whenever Cummings wrote about the lots. And he wrote about them a lot. What began as a last-minute filler story in 1972 became a decade-long project that culminated in the recovery of 400,000 acres of land for the state and a place in history for Cummings.

Maine’s public lots have their genesis in colonial times when Maine was part of Massachusetts. By law, undesignated parcels of land about 1,000 acres each were set aside in each township for public uses such as for building schools and local government. In the late 1800s, the state sold the rights to cut trees on those lands, but as time passed, the private companies cutting those trees came to believe they owned the land.

The state eventually sued the private companies and won, which returned the “lost” acreage to the state. Those lands and another 200,000 acres that came from negotiations between the state and the private owners make up the backbone of today’s public reserved lands system in Maine, which includes the Deboullie Mountain area, the Bigelow Preserve, Mt. Kineo, Tumbledown and the Camden Hills.

While Cummings was certainly not the only person working to return the public reserve lands to the people of Maine, he became the “public voice” of that effort, said Richard Barringer, the man Gov. Kenneth Curtis tapped to lead negotiations between the state and the private owners.

“He effectively mobilized public opinion to resolve perhaps the single most significant [land] transaction of the 20th century for the state of Maine—acquiring through legitimate legal means more than half a million acres of land for the perpetual use of the people of the state.”

Sticking with the public lots story was not an easy task. Cummings had his share of detractors, many of whom accused him of being biased, of only seeing what he wanted to see and being unwilling to appreciate the complexity of the issues the paper companies were dealing with. Some threatened to pull advertising from the Portland papers.

“He’d be writing on some aspect of the public lands almost every week on such a continuing basis that it couldn’t be ignored,” he said. “He was campaigning to get those lands returned. He let nothing stand in his way.”

The return to the state of more than 400,000 acres of land is no small matter and is a large part of Cummings’ legacy, but it is his lifelong commitment to the state and the important relationship between its people and the outdoors that gives him a unique place in Maine’s history, say those who know him.

“He has a very large place in the history of not just Maine’s conservation movement but really in the history of Maine’s sense of itself as a people. I would say right there with Gov. Baxter,” said Tim Glidden, president of Maine Coast Heritage Trust. “Gov. Baxter did it with a bully pulpit and his own money and his own vision and Bob did it with the tools available to him, which were his skills as a researcher and reporter, and his commitment.”

Cummings’ contributions live on through the state’s public lots and the other lands he has helped to conserve. His commitment lives on in his own family, too. His daughter is president of the Phippsburg Land Trust, which he co-founded, and one of his grandsons serves on the land trust’s board.

“When he was first trying to get me involved, I was like ‘the land trust doesn’t need any more Cummings’,” said his daughter, Brenda Cummings. But she’s come to understand the importance of carrying on the work from one generation to the next and her role in doing that.