Recycling is one of the key ways we can keep materials out of landfills and conserve our natural resources. For decades, Maine people have developed a strong recycling ethic because they want to do the right thing. However, many are losing access to recycling programs due to changes in the recycled commodities markets. This is not acceptable. Maine passed a law establishing a 50 percent recycling goal
30 years ago. Despite good intentions, the state recycling rate has remained stagnant at just 40 percent—and now it’s falling! Our low recycling rates are symptomatic of the fundamental problem: Corporations continue to produce wasteful, non-recyclable packaging. The key to increasing recycling rates and reducing waste starts with them, at the design stage.

Recycling programs should not be paid for by taxpayers and municipalities who have no say in what materials they are stuck managing and paying for. Recycling is an important environmental issue that should be planned for at the design stage. The costs of recycling should instead be built into the system—not an afterthought paid for by taxpayers.

NRCM supports a law that would reform recycling by providing a clear economic incentive for brand owners and big corporations to produce less-wasteful packaging that can be easily recycled locally. This policy approach is called “extended producer responsibility for packaging.” It is already being implemented all over the world. Packaging, which includes plastic, steel, aluminum, glass, and cardboard, constitutes approximately 30 to 40 percent of the materials managed by weight in waste management programs in Maine.

A New Model for Recycling

A new recycling model would work similarly to Maine’s eight existing product stewardship laws, in which producers who sell packaging in Maine would be subject to fees set up by a third-party, nonprofit producer-responsibility organization (PRO). The PRO’s primary function would be to reimburse our municipalities for the net costs of recycling (using funds from producer-provided packaging fees) and expand access to recycling for the different packaging materials. If municipalities have a profitable recycling program for the material type, with no net costs, then the PRO would not have to reimburse them. If municipalities have to pay for recycling, then the PRO would reimburse them for their costs. The producers have an incentive to use only recyclable materials since they will pay more if unicipalities don’t have a recycling program for their material type. This law would make recycling:

More Effective. Under the new law, producers of packaging materials would have a direct economic incentive to produce less-wasteful packaging that can easily and profitably be managed by municipal recycling programs. Municipalities would have a direct economic incentive to have a robust recycling program since it would no longer create a tax burden, and they could avoid disposal costs. Having shared responsibility between those who create the waste and those who manage it would foster recycling  system improvements and enable greater participation in recycling across Maine.

More Sustainable. Maine’s current approach to recycling is not resilient to changes in the global recycling market. Because towns and cities have to budget for recycling, when costs rise unexpectedly, they may be forced to stop or restrict their programs. Maine taxpayers currently pay $16-$17.5 million per year to manage packaging waste. Meanwhile, more and more disposable and wasteful packaging is entering the market because producers have no incentive to design packaging with the environment in mind. This leaves taxpayers unfairly footing the bill for a problem they didn’t create. With recycling reform, taxpayers will no longer pay for the cost of recycling since the net costs of recycling would be reimbursed by a producer responsibility organization. Think of this solution as an insurance policy for Maine municipalities when global recycling markets fluctuate. 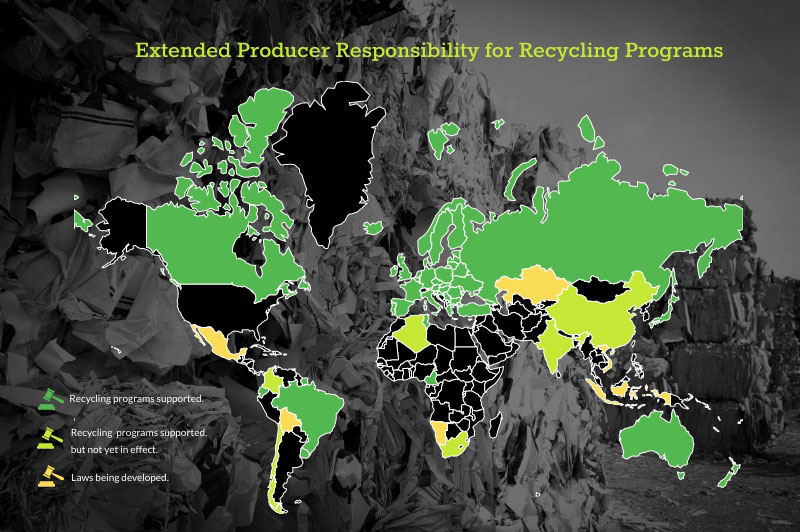 More Equitable. There are inequities across the state for what Mainers can recycle. The new law would provide the stable and consistent funding that all of Maine’s municipalities need in order to expand access to recycling. This law would also level the playing field for companies that are already doing the right thing because the new model would require companies that waste more to pay more. Those that waste less would pay less.

NRCM is working closely with lawmakers, stakeholders, and concerned residents to craft a law that is right for Maine using the framework created by the Resolve to Support Municipal Recycling Programs that was adopted in 2019. There will be strong opposition from big corporations that are benefiting from having taxpayers pay the costs of recycling. To reform recycling in Maine, we will need the support of Mainers across the state!

If you want this law to become reality in Maine, we need you to advocate for it in your town. For resources you can share with your community and elected officials, visit www.recyclingreform.org.