A report by the Biodiversity Research Institute (BRI), finds that mercury contamination is at levels dangerous enough to cause physiological and reproductive harm in a wide-range of songbirds and bats in the 11 northeastern states, including Maine.

The report, Hidden Risk, finds that certain species and habitats are of special concern. Bicknell’s Thrush, Rusty Blackbird, Saltmarsh Sparrow, Louisiana Waterthrush, and Wood Thrush are birds at particular risk, and the threat to the little brown bat is also high. Maine’s lakes have the highest concentrations of mercury in the country, which puts 30 percent of Maine loons at “high risk” due to mercury contamination. Habitats with higher concentration of water—such as lakes, bogs, estuaries, wetlands, and even mountain areas that tend to have a lot of fog—pose the greatest risks to birds and bats.

Earlier this winter, the Environmental Protection Agency (EPA) issued new standards to protect the health of American people, wildlife, and environment from mercury and other toxics spewed out from the nation’s dirtiest power plants. These important rules were long overdue (NRCM was a party to federal litigation many years ago to force these rules along). 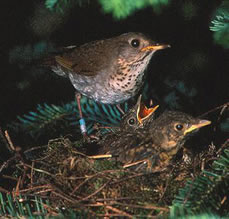 But the Clean Air Act has been under attack in Congress (and at the EPA and in the courts) from coal and oil industries and their allies. Now the EPA’s mercury and air toxics standards are facing a rollback vote in Congress. Senator Inhofe (R-OK), once again defending the interests of big polluters, wants to completely repeal these new clean air standards that would curb mercury and other toxic pollutants—and even prevent the EPA from having any similar rules on mercury from coal power plants.

Coal-fired power plants are the biggest source of airborne mercury, accounting for nearly 70 percent of the mercury American people and wildlife are exposed to every day. Mercury is associated with damage to the kidneys, liver, brain, and nervous system and can cause birth defects. And BRI’s new report clearly shows the dangers this pollution is posing to Maine’s birds.

It is essential that Maine’s Senators know that Mainers expect them to do the right thing and protect our kids, communities, wildlife, and environment from mercury and other toxics pouring out of dirty power plant smokestacks. Maine is home to thousands of birders who care about wildlife and are concerned about the harm from toxic air pollution. Tell Senators Snowe and Collins to protect the Clean Air Act.

The EPA standards set reasonable limits on the emissions of mercury, arsenic, acid gases, and other toxics from dirty power plants, and come at a time when nearly every other industrial sector has taken the necessary steps to reduce these poisons. Oil refineries, chemical plants, plastics companies, the iron and steel industries, heavy manufacturers—all of them have been operating in compliance with air toxic standards for more than 10 years. Dirty power plants need to do the same. The health of families, wildlife, and the environment we need to live safely are at stake.