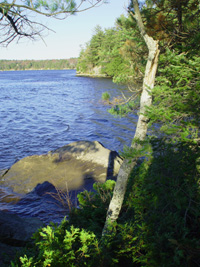 Thorne Head. Photo courtesy of LMF and its partner organizations.

Residents of Bath, one of Maine’s most densely populated communities, are now within walking distance of a 96-acre preserve with dramatic 100-foot cliffs, spectacular water views in three directions, and a half-a-mile of shore frontage on the Kennebec River. Thorne Head provides much-needed open space in a region that has traditionally scored low in statewide measures of publicly accessible recreational land. Local residents have enjoyed walking on this site with landowner permission, but a change of ownership might have closed off access or led to development of this prime waterfront property.

To protect this community resource, the Kennebec Estuary Land Trust (KELT) set out to raise the $425,000 needed for its purchase and stewardship. Despite having fewer than 100 members and less than $1,000 in annual dues at the outset, the Trust succeeded in its ambitious campaign—drawing support from many valued partners and securing contributions from more than 200 donors (including local residents, private foundations, the Maine Outdoor Heritage Fund, and the Land for Maine’s Future program). In addition to monetary gifts, the land trust received in-kind legal and money management services, and help from Maine Coast Heritage Trust in drafting two easements (now held by the Maine Department of Inland Fisheries & Wildlife). KELT took title to Thorne Head in October 1999.

The protection of Thorne Head benefits an ongoing effort to preserve the ecological values and abundant wildlife populations in the Lower Kennebec River Estuary — an initiative also supported by the Land for Maine’s Future program and other members of the Maine Wetlands Protection Coalition. Thorne Head includes high-quality salt marsh critical to the significant waterfowl and numerous endangered and threatened species that frequent Merrymeeting Bay and the Lower Kennebec.

Please note: Camping is not allowed and KELT requests that groups larger than 10 people get permission prior to using the preserve.

Directions from nearest town
Maine DeLorme Atlas and Gazetteer Map 6, B-5. Thorne Head lies 2 miles north of Bath’s commercial center, accessible from the end of High Street. There is a small parking area with a kiosk.