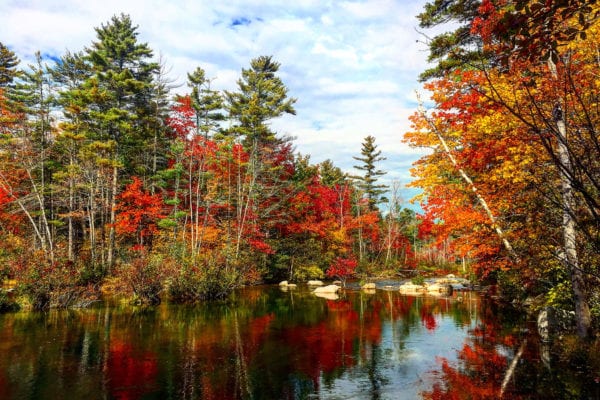 Before its waters were harnessed for dams and polluted with industrial waste, the Presumpscot was a clear and swift-moving river that plunged over 12 sets of falls in its 24-mile course from Sebago Lake to Casco Bay. Improvements in water quality have renewed recreational interest in the river, after decades in which people kept far from its banks–repelled by its rank odor and thick scum.When a 67-lot subdivision was proposed on riverfront land near the outskirts of Portland, area residents rallied to save a waterfront corridor for its ecological and recreational value. Portland Trails and the City of Portland Landbank Commission worked hard to create a 48-acre recreational preserve, with a bridge loan from the city and critical help from the Land for Maine’s Future (LMF) program.

An additional LMF grant allowed Portland Trails to secure three additional parcels lying on both sides of the river just downstream by the site of Presumpscot Falls and the former Smelt Hill Dam site. Until the dam’s removal in 2002, no one living had seen this mesmerizing set of rapids coursing down past steep rock walls. The river’s flow had been obstructed there since 1735. Now the scene at the falls is reminiscent of Maine’s wildest rivers, yet it lies only a thousand feet from densely developed residential streets.

Two of the parcels extend the Preserve’s trail system and provide a portage site around the Falls. A third parcel, on the opposite shore, offers visitors a Falls overlook and connects with trails on Falmouth’s newly established Walton Park, which the town created with LMF support. Plans are underway at Walton Park for a hand-carry boat launch and an expanded parking area.

The City of Portland’s Parks and Recreation Department now owns the Presumpscot River Preserve, sharing management responsibility with Portland Trails, which holds a conservation easement on it and owns the other three parcels.

Directions from nearest town
DeLorme Maine Atlas and Gazetteer Map 5, E-4. Take Washington Avenue (Routes 100/26) north from Portland, turning right Allen Avenue in North Deering. After about .7 miles, turn left onto Summit Street. Five streets in, turn right on Curtis Road and take your second right onto Overset Drive, going to the trailhead at the road’s end. To Walton Park: Take Allen Avenue (as above), but continue one mile past Summit Street until crossing a bridge. Walton Park is on the right just after the bridge.