Mount Agamenticus to the Sea 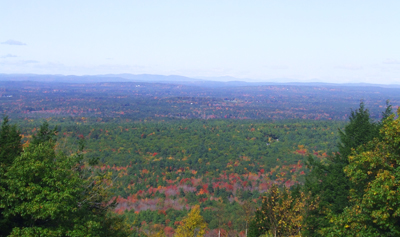 The lands surrounding Mount Agamenticus contain the state’s most diverse array of species and the largest number of rare and endangered species, despite being situated in Maine’s most densely populated county. Over the dozen years preceding 2002, the amount of conserved land in the vicinity of Mount Agamenticus and the York River doubled, thanks to the persistent efforts of numerous local and statewide groups and agencies (see Mount Agamenticus Region).

The vision for land protection in this area has extended to encompass a 48,000-acre project area stretching from “Mount A” to the tidal estuaries of Brave Boat Harbor and Gerrish Island. Ten local, regional and statewide conservation entities and six municipalities are working collaboratively to achieve this ambitious “Mount A to the Sea” initiative. A grant from the Land for Maine’s Future program helped these partners secure fee purchase of a large forested tract just south of the mountain totaling 296 acres.

This property, named the McIntire Highlands Preserve, represents a key piece in the broader conservation effort, being one of the largest remaining unprotected woodlands within the entire project area. Many of its trees date are between 100 and 200 years old, making them among the largest and oldest trees along the entire “Mount A to the Sea” corridor. The protected land helps to buffer the headwaters of the York River and protect the drinking water supplies for the towns of Kittery and York.

Directions from nearest town
DeLorme Maine Atlas and Gazetteer Map 1, A-4. Driving from Rte. 91 in York heading toward South Berwick, take a right onto Mill Lane. After approximately .5 miles take a right on to Linscott Road. Follow Linscott Road about .3 miles and park on left side of Road just before the Kittery Water District Gate. Continue on Linscott Road for a short distance then bear left onto Old Bell Marsh Road. Follow Old Bell Marsh Road for approximately .4 miles past Bell Marsh Reservoir which will be on the left. Entrance to trail on the McIntire Highlands Preserve will be on the right. Access is pedestrian only via a right-of-way over Kittery Water District lands.