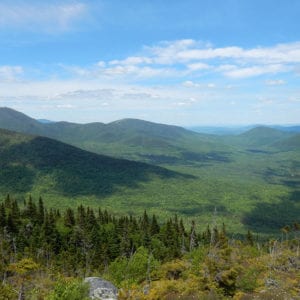 View from the top of Mount Abraham. Photo by T. Martin/NRCM

At 4,049 feet, the summit of Mount Abraham offers panoramic views of Maine’s western mountains. It is one of only 13 peaks in Maine higher than 4,000 feet, all but two of which are now in public ownership. Located near the Appalachian Trail, Mt. Abraham (or Abram as it is known locally) offers one of the most spectacular side trail opportunities along the entire length of the Appalachian Trail.

Hikers can walk through old-growth forests dating back more than 300 years. Four miles of the ridgeline extend above treeline, supporting an extensive arctic-alpine plant communities that contain seven rare plants. In addition, wildlife biologists have identified known or potential habitat on the mountain for several rare animal species.

These attributes helped inspire the mountain’s protection as an “ecological reserve,” the first to be donated to the State under a program the Maine Legislature established in 1999 that preserves representative examples of Maine’s natural communities as habitat for native plants and animals and as places for ecological research.

In 2000, the Maine Bureau of Parks and Lands designated 69,994 acres of its existing public lands as ecological reserves, but the Mount Abraham acquisition is the first new ecological reserve to come under this management.

The Appalachian Trail Conference (ATC) donated 4,033 acres on Mount Abraham to the State after raising funds for its purchase from a wide variety of charitable sources, including private foundations and the Land for Maine’s Future (LMF) program. Before donating the land, ATC conveyed an easement on it to The Nature Conservancy that protects natural values by prohibiting future development and resource extraction.

With additional support from LMF, the State acquired 1,026 more acres on the lower eastern slope of the mountain, expanding the reserve to 5,059 acres. The State holding includes most of the Firewarden’s Trail, a popular hiking trail leading up the east side of the mountain.

Directions from nearest town
DeLorme Maine Atlas and Gazetteer Map 29, E-3/4. From Kingfield, head north on Route 27, taking the first left (just past the Carrabassett River bridge) onto West Kingfield Road. The road turns to gravel after 3 miles. Go straight through the intersection 0.5 miles later, then bear right at the fork that follows.