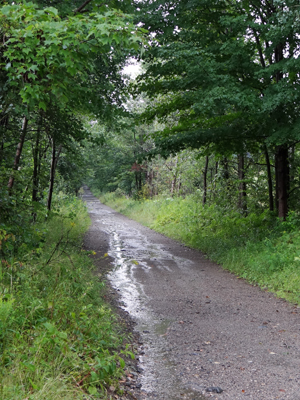 For more than a century, trains passed through meadows, wetlands, and dense woods en route between Jay and West Farmington. After train service was discontinued, the rail company that owned this 15-mile corridor generously agreed to sell it for less than its appraised value — enabling the State and local communities to protect this valuable recreational resource. To help match a Land for Maine’s Future grant, local communities contributed funds to the trail’s purchase and have helped raise additional money for needed repairs and improvements. Working cooperatively with community representatives, the State identified and coordinated necessary improvements along the gravel/dirt trail – relying heavily on local volunteers to complete much of the work.

A diverse array of trail users can now enjoy the gentle grade of this former railroad bed while looking out over the more hilly surrounding terrain. The corridor leads past many homes in West Farmington, Wilton, and Jay, making it easy for people to use the route as a safe means of alternative transportation for shopping or commuting.

The trail has brought economic as well as recreational benefits to the community. Word of the trail has spread (the national Rails to Trails Conservancy named it “Trail of the Month” in November 2001), and it has become a destination that lures visitors from beyond the immediate communities. Numerous local businesses now benefit from the trail, particularly those that cater to cross-country skiers, mountain bikers and snowmobilers. One local snowmobile club even purchased a building adjoining the trail to use as a club house and storage building.

Directions from nearest town
DeLorme Maine Atlas and Gazetteer Map 19, E-5; Map 20, D-1. From Route 4 in Jay (headed north), turn left onto Old Jay Road (just after the Knights of Columbus building). After passing an auto body shop (and before reaching a small park), turn into the parking area by the trailhead. From Farmington, take Route 43 across the river into West Farmington, and turn right just after the bridge. Bear left at the next intersection and park on the right in the former rail yard. The trail heads south (over a bridge).