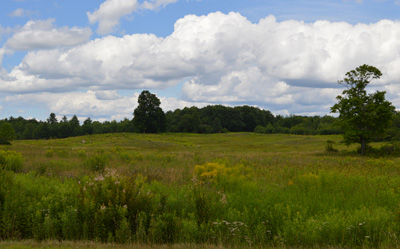 Lying in Maine’s fastest growing community, Fuller Farm has a pastoral mix of hayfields, grasslands, and woodlands that slope down to the Nonesuch River. The 23-mile river, which flows into Scarborough Marsh (Maine’s largest saltwater marsh), is classified by the State as a “high value fishery” and as a “priority watershed,” having several fish species of federal concern–including the American eel, river herring, and shad.

Generations of local residents have enjoyed walking, skiing, and watching wildlife at Fuller Farm. The 180-acre tract of unbroken land supports species with large ranges (such as moose, river otter, fox, mink and fisher) and numerous birds of special concern (such as the Northern goshawk and Eastern meadowlark). A designated snowmobile trail crosses the land, one of a dwindling number in a region that has had many trails severed or closed to make way for new residential and commercial growth. 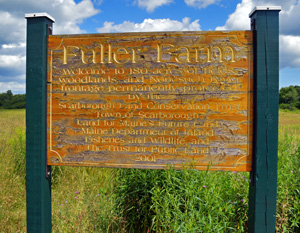 Several years ago, heirs of the farm put it up for sale, and the property was approved for a subdivision of 39 2-acre houselots. At the eleventh hour, the owners generously agreed to sell the land to the Scarborough Land Conservation Trust (SLCT) at less than its appraised value so that the land could remain community open space. The Trust for Public Land played a key role, stepping in as a private lender to purchase the property while the community sought funding support from the Land for Maine’s Future program, the Town of Scarborough, and private donors. The land is now protected by an easement (held by the town of Scarborough) and managed by the SLCT.

Directions from nearest town
DeLorme Maine Atlas and Gazetteer Map 3, A-2. From Exit 6 off the Maine Turnpike: at the first light, go left onto Payne Road, and left at the next light onto Holmes Road. Continue to the second intersection marked by a blinking light and turn right on Broad Turn Road. Go approximately 1 mile to the farm’s parking area on the right.