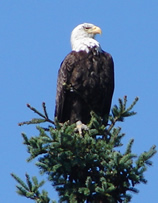 As part of a Land for Maine’s Future project, nearly a mile of shorefront along Egypt/Taunton Bays as well as the title to two small islands, aptly known as the Little Islands, was transferred to the State of Maine. The shoreline tract has historically been used by Bald Eagles for nesting, and lies in the midst of a region renowned for its outstanding wildlife values and the critical habitat that it affords migrating shorebirds and seabirds (including black ducks). The land had been slated for subdivision into waterfront house lots. Controversy over the development’s potential impact on wildlife prompted TNC to acquire the property, and later transfer it to the State for long-term management by the Maine Department of Inland Fisheries & Wildlife. Access to the site is primitive and there is no motorized use.