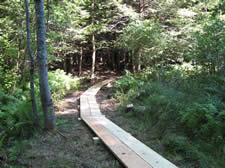 Photo courtesy of Town of Falmouth

At 400 feet, Blackstrap Hill is one of the highest points in Cumberland County. The hill is covered in a mix of conifers and hardwoods, with notable stands of rare black birch, mature hemlock and old-growth trees (including a white oak 14 feet in circumference!). Blackstrap Hill’s wooded slopes are visible for miles, a welcome view of green in the rapidly developing Greater Portland region (which the Brookings Institute named ninth in the nation for its rate of sprawl per capita). Blackstrap Hill forms the hub of a well-established trail network that extends into Cumberland, Windham, and Westbrook. For decades, private landowners around the hill allowed traditional recreational access, but with property values soaring and Falmouth’s population growing 3-4 percent annually, many trail users feared for the hill’s future. When one landowner began to consider creating a 35-lot subdivision, the prospect of loss became palpable. 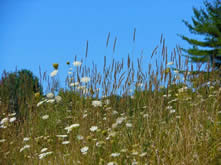 Photo courtesy of Town of Falmouth

The Falmouth Conservation Trust rallied recreational users of Blackstrap Hill and other community members in hopes of purchasing the threatened land. The Falmouth Town Council agreed to contribute more than a third of the project cost, and two neighboring landowners generously offered to donate easements on their properties – providing a valuable matching contribution. The Trust then sought help from the Casco Bay Estuary Project Habitat Protection Fund and the Land for Maine’s Future program, which several years before had helped conserve the abutting 183-acre Wilshore Farm. The second State grant helped to create a 468-acre woodland with more than a mile of undeveloped frontage along the Piscataqua River just 8 miles from downtown Portland. Blackstrap Hill supports diverse and abundant wildlife, providing habitat for more than 120 bird species (including several that the State deems to be of special concern). Hunters come in search of deer, moose, and ruffed grouse while fishermen catch brook trout and brown trout from the river’s banks.

Directions from closest town
DeLorme Maine Atlas and Gazetteer Map 5, D-4. From Portland, take Washington Ave. (Routes 26/100) north 1 mile past Turnpike Exit 10. Turn left onto Mountain Road (at the light) and take to the end, turning right onto Blackstrap Road. Parking is on the right about ¼-mile north of the Mountain Rd. intersection. Parking and access are also available on the Wilshore Farm property off Hurricane Rd: continue north on Routes 26/100 roughly 2.5 miles beyond Mountain Rd., taking a left onto Hurricane Rd. Parking is approximately one mile down on your left, just after crossing the Turnpike and Piscataqua River.