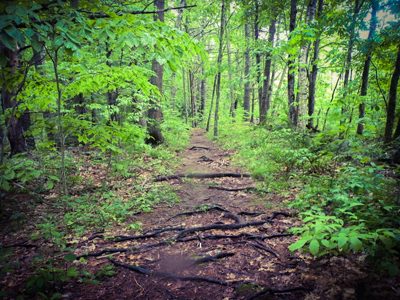 Of all the towns in rapidly growing Cumberland County, Windham ranks second in percentage population increase over the past three decades. Many former farms and woodlands have sprouted housing developments and it looked as if this 105-acre property in the heart of town would be the next to go. The land, between three heavily traveled roads (Routes 302, 202 and Windham Center Road), sold to a developer who proposed building Winchester Estates, a 41-lot residential subdivision.

Local residents, tired of contending with many unwanted side effects of runaway growth, did not want to lose this natural centerpiece of their community – land that held great recreational and historical significance for them. The fields and woods, bisected by Black Brook (a tributary of the Presumpscot River), were once part of a Colonial-era farm known as “Stagecoach Tavern” that was a stop on the Underground Railroad. The undeveloped land offers trails for snowmobiling and mountain biking, and helps to protect water quality and minimize in-town traffic congestion.

Given local sentiments, the developer decided to offer the land for sale to the community. Local citizens formed the Presumpscot Regional Land Trust and acted quickly to secure the $347,000 needed to purchase the land and cover the developer’s expenses. The fundraising campaign for Black Brook Preserve generated a strong sense of community among residents in this fast-growing suburb. When asked to approve a $60,000 donation to the project, 63 percent of voters supported the measure. A grant from the Land for Maine’s Future program then helped to match the funds raised locally (after the Trust and local officials demonstrated how the Town would integrate this property into its local growth plans).

The Windham Land Trust plans to make the Black Brook Preserve more accessible, creating additional recreational trails and encouraging school use of the wetlands since the property is within walking distance of the town’s elementary, middle, and high schools.

Directions from nearest town
DeLorme Maine Atlas and Gazetteer Map 5, D-3. From Foster’s Corner, the rotary in Windham where Routes 302 and 202 intersect, go south on Route 202 towards Gorham. Travel one mile to the intersection of Rt. 202 and the Windham Center Road. Turn left: the Black Brook Preserve begins approximately 200 feet from the intersection on the left. Parking is at the bottom of the hill in a designated driveway.