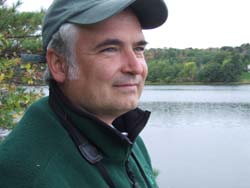 Jeff Wells will be the guest speaker at NRCM’s annual meeting on October 16, 2008, at Maple Hill Farm in Hallowell.

On October 16, 2008, conservation ecologist Jeffrey Wells, Ph.D., will give a multi-media presentation, “Canary in a Coal Mine: Birds, Energy, and Global Warming,” at NRCM’s Annual Meeting. Jeff, author of the acclaimed Birder’s Conservation Handbook, is senior scientist for the International Boreal Conservation Campaign and a Cornell Lab of Ornithology Visiting Fellow. His work protecting birds and their habitats is closely tied to NRCM’s own issue areas, including energy. He spoke with us recently about this important connection.

Maine Environment (ME): Can you tell us a little about the connections between bird conservation and NRCM’s work on major environmental issues like global warming, North Woods protection, river restoration, and toxics?

Jeff Wells: Major threats facing most birds come from global warming, habitat loss and degradation resulting from America’s addiction to fossil fuels, toxic chemicals in the environment, and habitat changes caused by invasive species and changes in water flow regimes, especially in river systems. It’s a common misconception that bird conservation is primarily about bird banding, captive breeding, or fencing nesting colonies. People are often surprised to read in my book how so many of the biggest bird conservation successes are the result of projects that were not specifically focused on birds.

ME: What are the threats of global warming to birds in Maine?

Jeff: Energy-related issues are at the forefront of bird conservation because the ecological changes resulting from global warming will be profound. To give you an idea, imagine your grandkids having to travel to Aroostook County to be able to see our state bird, the Black-capped Chickadee. Based on current models that predict how bird ranges will shift with changes in climate, a number of species will disappear from our state all together. Many people are aware that Maine’s loons have some of the highest mercury levels in their bodies as a result of air-borne contaminants from power plants to our west. Most people, on the other hand, don’t realize that most of the oil our country imports is not from the Middle East but from Canada. This is causing massive habitat loss and degradation for millions of birds, including many that migrate through or winter here in Maine. There was recently a vivid photo of an oiled Bufflehead, a bird that winters in Maine. The bird later died—one of 500 waterfowl killed in a single incident—landing on a toxic tailings pond in the Alberta Tar Sands. Sadly, these deaths represent a drop in the bucket of the millions of birds that will be lost as a results of Tar Sands development. There is literally a direct connection to Maine—right now there are plans to upgrade a pipeline that will carry tar sands oil to Portland.

ME: You grew up here in Maine before going to Cornell for 16 years. Can you share a personal observation about what birds are telling us about Maine’s environment?

JW: Maine birds and other wildlife populations continue to diminish because of habitat loss, fragmentation, and degradation resulting from unchecked development over the last few decades. When I was in high school my family lived in Bangor, and I used to go birding in some farm fields on the outskirts of town where there were always Eastern Meadowlarks—a classic species of Maine fields—and another very cool, less common grassland bird called the Upland Sandpiper that make a wonderful, whistling song. When the Bangor Mall went up in that area, those species disappeared. This kind of story is familiar to many of us here in Maine. There are places along coastal Maine where the number of houses has double, tripled, even quadrupled along a particular road, ocean frontage, or lakeshore since the 1970s. Large amounts of habitat are lost from such changes, but perhaps more importantly are the residual effects from fragmentation, cats allowed outdoors, auto kills, and noise. The impact from these issues may surprise most people.

Although we now realize some of the mistakes we made along the coast, we are at risk of repeating these mistakes in another area of the state: the North Woods. Without a clear vision for the future of this great treasure, we may very well lose it to the likes of Plum Creek and other companies that do not have the same attachment to places like Moosehead that we Mainers do.

ME: What are some of the Maine birds that you are most concerned about?

JW: The subtitle of my book, Birder’s Conservation Handbook, is “100 North American Birds at Risk. Of those species, at least 15 occur regularly in Maine. You hear about some like the federally endangered Piping Plover because they occur in areas heavily used by the public (beaches). Others have a much lower profile, but their declines are of serious concern. The Rusty Blackbird has declined by more than 95 percent over the last 50 years; only a handful have been found still breeding in Maine. American Black Duck, although still quite common here in Maine especially in winter, may have declined nationally by as much as 50 percent over the last 40 years. Bicknell’s Thrush is a species that breeds on Maine’s high elevation peaks; in addition to loss of its wintering habitat in the Dominican Republic and Haiti, its biggest threats appear to be from global warming-induced habitat changes and mercury from coal-fired power plants that is accumulating in their bodies.

ME: What are some ways people can make a difference for birds?

JW: What’s good for the environment is good for birds. I encourage people to become active at three levels: home/community, regional/state, and national/global. Actions at home like saving energy by using compact fluorescent light bulbs, using recycled paper products, and eating organic, locally produced foods are all things that help birds. As you know, NRCM provides many opportunities at both the regional and state level for people to weigh in on policy issues, whether it’s through action alerts, attending public meetings, writing letters to the editor and agencies, and holding elected officials accountable. There are also often opportunities to volunteer with local land trusts or on town conservation commissions to do more hands on work or to establish open space plans that provide a vision for a sustainable future. It’s important to remember, though, that all birds are “canaries in a coal mine” — meaning, indicators of the health of our environment. When you do things to help them, you help make sure Maine will be a better place for our kids and grandkids.