In January 2020, Wolfden Resources, a Canadian company in massive debt and with no metal mining experience, submitted a rezoning petition to the Land Use Planning Commission (LUPC) for a metal mine at Pickett Mountain. Wolfden hopes to mine for zinc, lead, and copper on 528 acres near Mount Chase, not far from Baxter State Park and the Katahdin Woods & Waters National Monument. 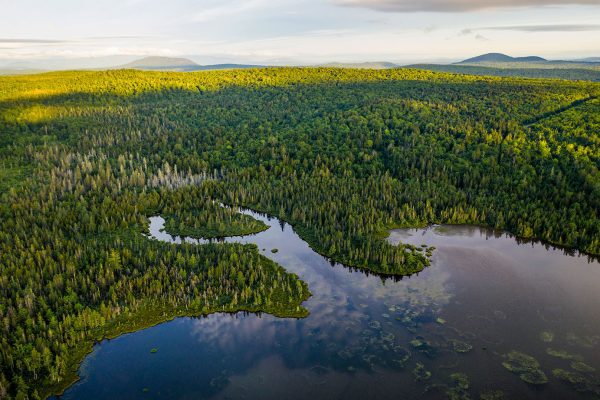 After 18 months of requesting additional information from Wolfden, LUPC staff recommended the Commission deny Wolfden’s rezoning petition, “based on Wolfden’s continued failure to provide sufficient information for the Commission to make necessary findings within the applicable deadlines, as required by Chapter 4 of the Commission’s rules.” LUPC staff cited 59 inconsistencies and errors in Wolfden’s final September 1, 2021, petition filing. At its October 13 meeting, the LUPC was poised to take the staff’s recommendation and deny Wolfden’s petition. In the face of this, Wolfden instead withdrew its petition.

“In reviewing the latest version of the petition, staff found numerous inconsistencies, errors, and omissions, and that a significant amount of information is still needed to address key concerns. Wolfden initially stated that inconsistencies in the petition are few and minor. Staff agree that some are minor, but others are not. What is documented in the record is a persistent pattern of inconsistencies, errors, and omissions…..Based on the current state of the petition, staff has no reason to believe that we will get a new version of the petition from the current Wolfden team that is accurate, consistent, and convincing after we put in that additional work.” – Stacie Beyer, LUPC Planning Manager

LUPC staff expressed deep skepticism in Wolfden’s team after working with them for 18 months to address deficiencies in their application….

“Wolfden argues that there’s no legal basis for denial, and they haven’t had the opportunity to respond to deficiencies in the petition. Staff has provided opportunity for Wolfden to respond to questions and address inconsistencies, errors, and omissions over the 18-month process. The facts in this case are nothing like anything else staff has seen before. We believe there is a sufficient legal basis to move forward to denial….We’ve looked at four different versions of this petition. Between the third version and fourth version we’ve made staff resources available every two weeks to help them answer the questions that we had, and we’ve still ended up with a petition that had 59 errors, omissions, and inconsistencies in it, and 17, 18 of those were not responsive to our questions. Staff has lost confidence in the ability of the Wolfden team to provide a petition that’s accurate.” —Stacie Beyer, LUPC Planning Manager

“Staff have considered the history of the petition, the deficiencies of the Sept. 2021 version of the petition, and Wolfden’s response time for the Feb. 2021 letter. Based on these factors, staff have determined that it is highly unlikely that the current Wolfden team will be able to provide information sufficient to meet its burden of proof such that the Commission could make, within applicable statutory and regulatory deadlines, the findings and conclusions required by law to approve the petition.” —Stacie Beyer, LUPC Planning Manager

“I wanted to make a motion to deny the application because I feel that this has dragged on forever and that this applicant and all future applicants need to understand the seriousness of requests from staff for information and if they don’t provide information to the staff and answer 59 inconsistencies.” – Millard Billings, LUPC Commissioner

“ I agree with Millard on supporting the staff’s recommendation of denying the project. I have never seen anything like this before, where an applicant at least to my awareness was seemingly so uncooperative with the staff. It almost doesn’t even make sense, if indeed they’re hoping to get their application approved. At this point I can totally understand why the staff doesn’t have any confidence in moving forward with the application as it stands. I find it quite amazing, striking.” – Gwen Hilton, LUPC Commissioner

These LUPC statements should also serve to show other regulatory agencies that Wolfden is not capable of developing a mine. These agencies and the public should view any other Wolfden projects, such as the company’s proposal to explore building a mine in Pembroke, with a high level of concern because of Wolfden’s demonstrated incompetence and unreliability. The Maine Department of Environmental Protection should scrutinize any exploration the company performs, including that in Pembroke, very closely to prevent Wolfden from damaging Maine’s environment.