What Qualifies as Scientific Authority?

“Listen, I’m not qualified to debate the science over climate change,” Speaker of the House, John Boehner (R-OH) 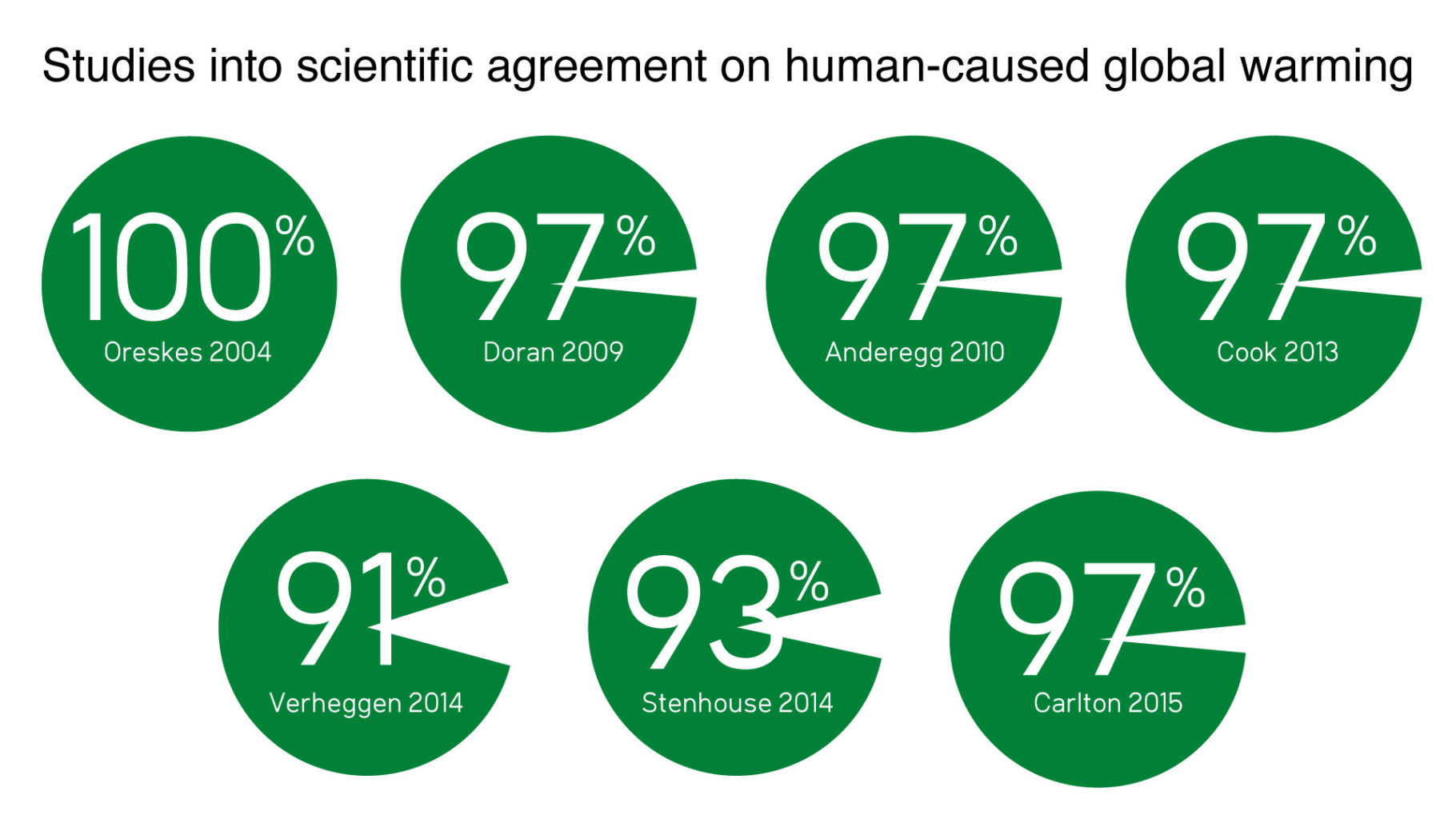 Recently I sat dumbfounded watching Marco Rubio tell South Floridians about all the other priorities that must be met before government can deal with what is arguably the biggest ecological disaster in the history of the state. What specifically caught my attention was his assertion that there are scientists on both sides of the issue, and that before we act, we should first let science work out a solution to the devastating pollution emanating from Lake Okeechobee. Indeed, this is often the refrain from conservative politicians, including Rubio, with respect to climate change. Citing their “authoritative” sources who deny or minimize anthropogenic climate change, they tell us that the science is not settled.

Since the creation of the National Science Foundation in 1950, the US has built the most respected and well-endowed scientific research and development enterprise in the world. This success is derived from our crown jewel of higher education: our extensive system of doctoral granting institutions. Supported by arguably inadequate federal and state investments, these institutions have produced amazing discoveries and insights. The men and women who work in the service of science do so mostly with integrity and devotion to a higher purpose. Their contributions to civilization far exceed anything my parents might have dreamed would emerge from the courage and sacrifice of so many during WWII.

Given the enormous investment in our scientific enterprise and the resulting history of achievement (see the 20th century timeline here), one might think that even skeptics  would listen to the most respected scientific authorities on the issue of climate change. Who are these authorities?

Here I offer only a partial list of organizations officially endorsing the urgent reality of human-caused climate change. The links will take you to an organization’s official statement on climate, or to the homepage if such a statement does not exist. Included here are all organizations who were signatories to a blunt letter to Congress, 28 June 2016. I include also some widely respected organizations from outside the US.

The Intergovernmental Panel on Climate Change (IPCC) is worthy of special mention. Because it is chartered by the United Nations, conservative ideologues have dismissed the work of the Nobel Prize winning IPCC as somehow tainted by an imagined and vaguely defined UN agenda. The IPCC operates under the highest standards of scientific integrity and produces its periodic assessment reports as arguably the most critically reviewed science in the history of science. The IPCC produces no new science. Instead, it summarizes and interprets the peer-reviewed published literature relevant to climate change science, impacts, mitigation, adaptation, and policy. It reviews thousands of papers, and there is over 95 percent turnover of reviewers and authors between assessments, which are issued every 6 years or so. Hundreds of scientists from dozens of countries have participated. The vast majority of these scientists are not paid, but instead receive reimbursement for expenses and do this work out of a sense of duty and for the prestige for having been selected. Similar high standards apply to the work of the US Global Change Research Program.

The scientific literature confirms the reality and severity of ongoing climate change. Beginning in 2004 there have been seven studies of the overwhelming consensus within the scientific community, including  Naomi Oreskes, Peter Doran, William Anderegg, Bart Verheggen, Ed Maibach, J. Stuart Carlton, and John Cook. Through rigorous sampling, these studies reveal an expert consensus somewhere between 90 percent and 100 percent (from Skeptical Science). Those scientists with the highest level of expertise in climate science are the most convinced that this issue warrants urgent attention.

It is revealing that politicians who deny the importance of climate change never mention the authoritative sources listed here. Instead, typically referenced as evidence that the science is not settled are the opinions of a handful of credentialed climate scientists who have made it their work to publically challenge this consensus. The most prominent include Richard  Lindzen (MIT), John Christy and Roy Spencer (University of Alabama, Huntsville), and Judith Curry (Georgia Tech). Their research has not warranted any significant doubt about the existence or severity of climate change, but they have asserted to the contrary to the press and in testimony to Congress. Their motivation for opposition seems grounded in their political ideology, although they have received compensation by free-market think tanks, which receive funding variously from the fossil fuel, chemical, and tobacco industries. Other widely cited but discredited scientists whose compensation can be directly traced to the fossil fuel industry include Willie Soon (Smithsonian Harvard Astrophysics Laboratory), William Happer (emeritus Princeton University), Patrick Michaels (Cato Institute formerly University of Virginia), and Bjørn Lomborg (founder of the Copenhagen Consensus  Center, a US-based think tank). An extensive database of individuals and organizations involved with the global warming denial industry supports the recent analysis showing that fossil fuel money and free-market ideology are the primary drivers in the ongoing attack on science.

The eclectic scientific community is by no means uncritically accepting of research that attributes geophysical changes to human-caused climate change.  The rigorous exercise of detection and attribution is the foundation of good climate science. A compelling example of differences in expert interpretation is the attribution of the apparent slowing of the Atlantic Conveyor (AMOC), which moves equatorial waters to North Atlantic where it sinks to later emerge largely in the Southern Ocean.  Continued massive influx of cold, fresh water from melting ice sheets in Greenland has been hypothesized to be the cause of the “cold blob” in the Irminger Sea of the North Atlantic (shown above). Research published last year in Nature Climate Change suggested that the diluting of the North Atlantic due to freshwater from melting glaciers was responsible for the apparent change in Atlantic currents. Although this seems plausible, recent work published in Nature Geoscience and Geophysical Research Letters challenges this view, arguing that the slowdown is consistent with natural variation. This in no way suggests that anthropogenic climate change is not a serious problem, but instead is part of the refinement of our understanding that is characteristic of good science.

I could add more examples, but those unable to discern the valid science in this compendium are unlikely to be convinced. Senator James Inhofe (R-OK) has referred to global warming as a conspiracy and the greatest hoax. In light of the diverse authorities listed here, Inhofe’s assertion not only stretches credulity, it dismisses the honest work of our most august scientific institutions. The war being waged by the climate-change denial industry has been ongoing for almost 20 years. This is not unlike the tobacco industry’s use of similar tactics and involved many of the same players, who argued that the health hazards of smoking were unproven.

My personal experience with the denial industry has resulted in a painful political awakening. In 2007 I was silenced and dismissed while giving a report on climate to a joint committee of the Florida House and Senate. In 2010 I found myself sharing a podium with Willie Soon, who proceeded to grossly misrepresent science to an uninformed audience in Boise, Idaho. In both of these instances I witnessed firsthand how political ideologues bullied and treated legitimate scientists with overt hostility and contempt.

If you are a scientist and you think that your work has no political significance, think again. We like to think that well-established environmental science should not be subject to partisan arbitration, but it is painfully obvious that this is not the case. Knowledge is power and any science of significance can be a threat to vested interests.

If you are a politician and you think that you can silence or outrun science, think again. Senator Rubio and many other deniers of the reality of climate change are discovering that sooner or later the facts are inescapable. The Earth is not flat, gravity is real , the Earth revolves around the sun, organic evolution is ongoing, and the greenhouse effect is a clear and present danger to civilization.

The good news is that science has, finally, won the day. Evidence from the campaign against smoking suggests that social change can happen quickly. While this is hopeful, we must now step up efforts to dramatically curtail fossil fuel emissions and manage the carbon budget of the biosphere. To make progress, it is essential that we give no credence to politicians who would continue to cast doubt on this science.

The dark money–funded denial industry has dealt a serious blow to our children’s future. It is no hyperbole to say that the delay caused by such gratuitous intransigence will damage millions of human lives and result in accelerated disruption of the biosphere. Although their behavior has been legal, sensu stricto, history may well regard prominent deniers as criminals.