Check out the next installment of Windham Middle School’s Bird Blog! Each student in their three observation groups has been making careful observations at Windham’s new bird feeder stations!

Tayshawn~ This week we have not seen any birds but we have been looking at the bird cams. We saw a lot of Hairy and Downy woodpeckers. Even though we didn’t see anything we learned a lot about bird watching.

Julia~ Over the past week we have seen many different birds like Downy and Hairy woodpeckers.  We have also been looking at the bird cams on our laptops every week during our lunch.  We learned how to tell the difference between boy and girl woodpeckers.  For example, the male birds have red on their heads, and the females do not.  We have learned many different facts about the birds we watched, like how they are not as likely to come to our feeders during the cold than when it is warm out.

Melissa-Anne ~ So on Tuesday we saw three crows by the feeder eating the bird food that fell off the feeders. And we also saw two Hairy Woodpecker (girl and boy) on the bird house feeder. and one girl  Downy Woodpecker. We saw two downy woodpeckers on the second day when it was raining, and we saw some birds but they flew away too quickly. 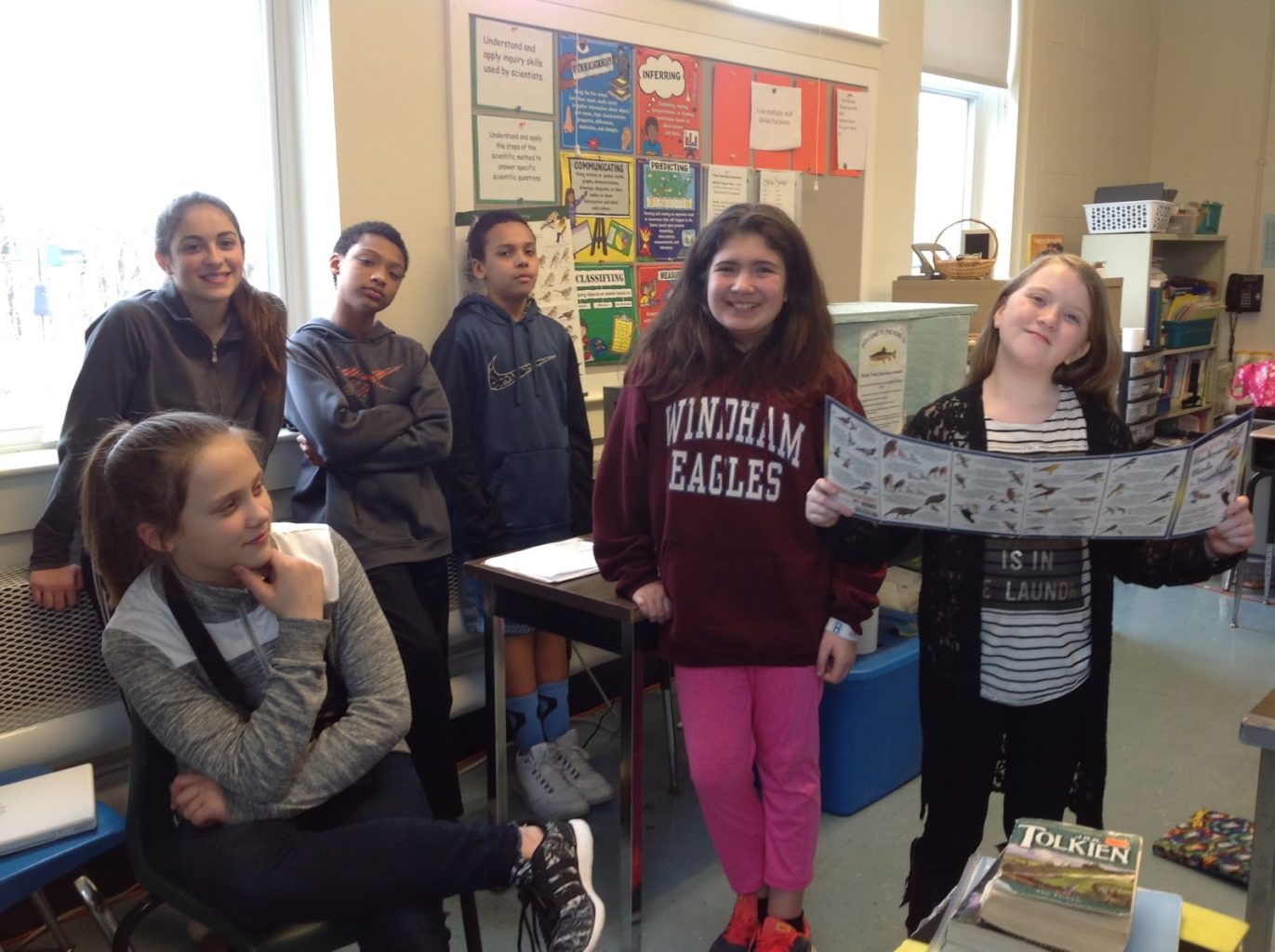 Kylie~ This week we saw more birds than usual. The sightings were not spread out, really we only saw birds on Tuesday during lunch. The birds we saw were crows, Hairy Woodpeckers, and some Downy Woodpeckers. When we weren’t looking for birds we watched bird cams from New York and Canada. Over the past week, I learned how to tell birds apart with similar qualities. I also learned how to tell a girl and a boy bird apart.

Emily~ This week we saw crows, and Hairy woodpeckers and Downy Woodpeckers. On Tuesday we saw some Downy Woodpeckers during lunch. When we were not looking for birds we were watching bird cams from New York. During this week we learned how to tell a boy and a girl bird apart for each other.

Isaiah~ This week I saw some woodpeckers and two crows going after a hawk, we saw an owl protecting her eggs. I saw a Blue Jay and a chickadee. It was really weird to see the crows go after the hawk (those jerks).  The hawk did nothing wrong and if it did I would have seen it disrupting the crows but they just chased it.

Sara~ Over our bird watching week, there haven’t been many birds seen on the feeders. The fluctuating weather could’ve had an effect on not many birds coming to our feeders. During lunch we watched the bird cams on our laptops. We saw some doves, cardinals, and two Barn Owls, and they interacted by eating food together. There are a few ways to tell the difference between a male and female Mourning Dove. First, the Mourning Doves are between 9 and 13 inches long. The males are just a tad longer than the females. Mourning Doves have reddish feet, tiny black beaks, and their feathers are edged with white. The males have more of an intense coloring. Also it’s important for us to be learning about citizen science because real world scientists shouldn’t have to do all the work. Students and classes should help out with data collection. 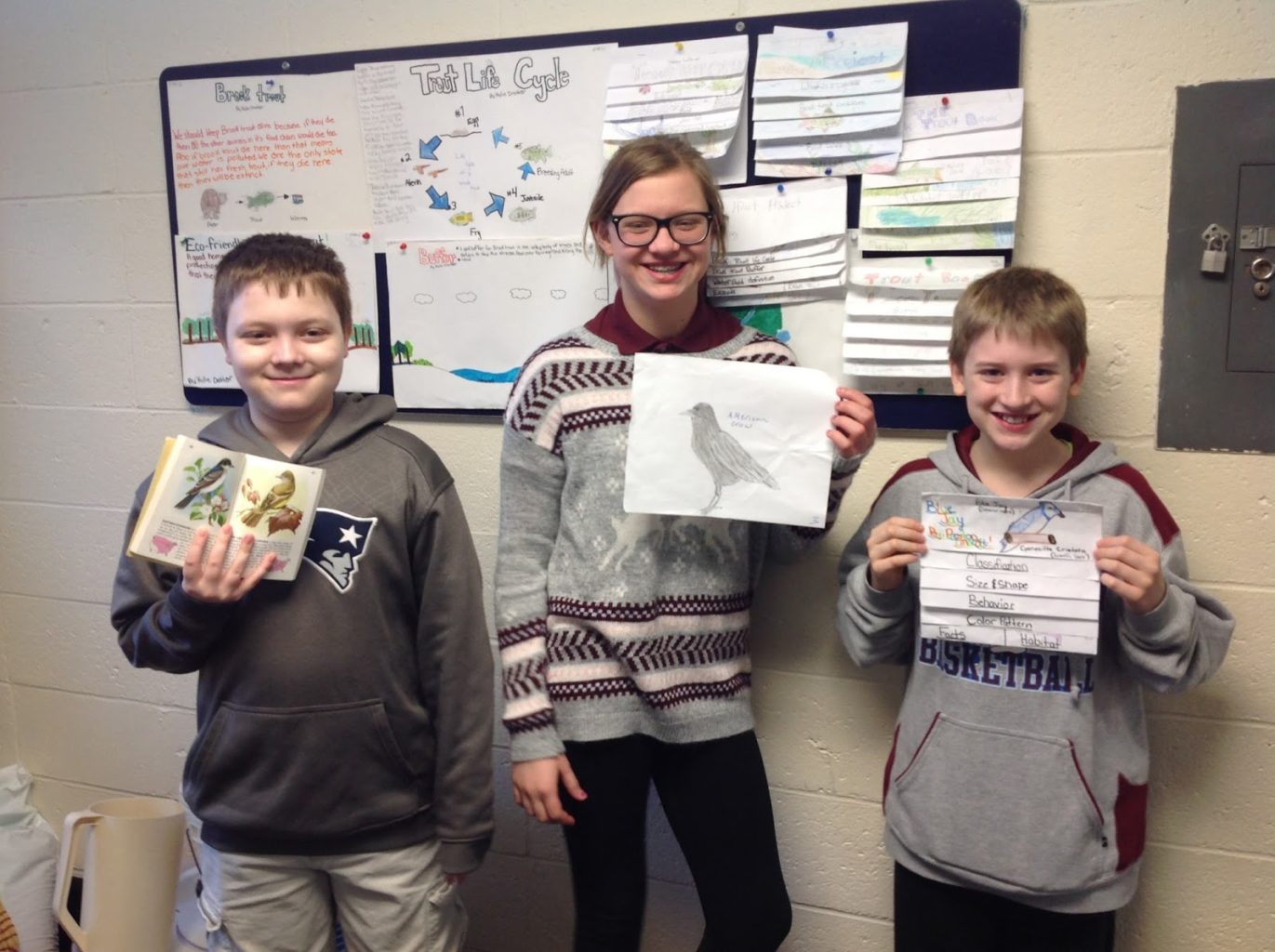 Silvi~ Throughout our bird watching, there have been not a lot of birds seen on our feeders. Our weather has not been bright during the week, so we had no birds. During one day of our bird watching meetings, during lunch at the classroom, we were watching (Live Bird Cams) and saw two Barn Owls, two different type of doves (Mourning Doves—male and female) and a Hairy Woodpecker.

Cole~ During our bird watching time we didn’t see a lot of birds at the feeders due to the weather. What we did see is some doves on the Ontario bird cams. We saw two different kinds of Doves. They were a Mourning Dove and a Eurasian Collared-Dove.

Jacob~ This week we studied and watched four Black-capped Chickadees which are bold and unique. The way you can tell them apart is the head. The head is black. The Downy Woodpecker has a beak that is ⅓ of its head length. We saw a female House Finch and a female Downy Woodpecker.

Josh~ This week we were the bird watching group. We watched the birds and studied them. We learned how to tell what kind of bird and what family it is part of. For one week went outside every day to refill the bird feeders. Some of the birds we saw were a Downy Woodpecker, a Black-capped Chickadee, a yellow finch, and a gull. We had a great time watching and studying the birds!! 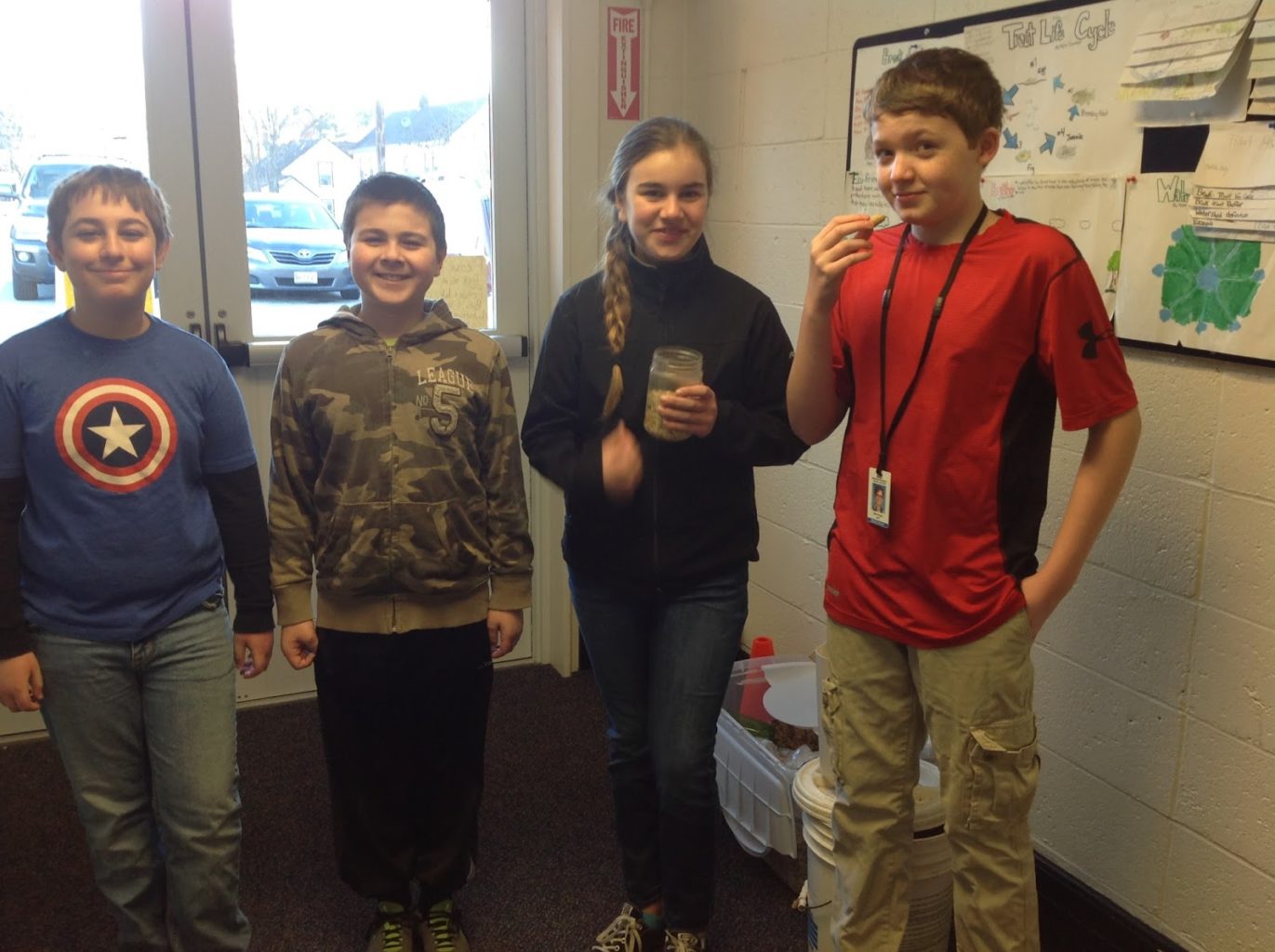 Ryan~ This week we went outside to feed the birds, and put new water in for them.  We also studied and used the bird books to see what kind of bird it was.  I saw a woodpecker with red on its head, a crow, a duck, and a chickadee.

Nia~ This week we saw four Black-capped Chickadees all at once. Also at the same time we saw that we saw one male Hairy Woodpecker, one female Downy Woodpecker, and one female House Finch. We used little booklets with bird types in them also we used a formation sheet. It was a good week we learned all sorts of new birds. Also we got to go outside to feed and water the birds. It was a fun week for watching birds.

Preston~ Over the past week my group and I only saw four birds. We saw a male American GoldFinch, A male Purple Finch, a male American Goldfinch and a female Hairy Woodpecker. To figure out what the birds are we used a sheet that listed some birds and then went from there it was also helpful because it also tells whether it’s a female or a male. We also got to look out the window and see birds and squirrels. We got to fill the water if needed and watching birds was fun! We also saw a bunch of color patterns on the birds that were different. The colors are bright with the American Goldfinch like the yellow stands out. With the Hairy Woodpecker it is only two colors except for the male. The male has a little bit of red on the head and a Purple finch has some red mixed with purple.

Lina~ We didn’t see many birds, only four in all. We saw an American Goldfinch (male), a (male) purple finch, an American goldfinch (female), and a (female) hairy woodpecker. We used the books and posters to find out the birds species. This week we went out and changed the bird bath water. It was an overall fun week for watching birds, even though we didn’t see many the majority of the time, we did see squirrels. The colors of the goldfinch were yellow, that’s how we knew it was the goldfinch. The hairy woodpecker is only black and white. It is interesting to see the different colors and shapes of birds.

Zach~ Over the week we only saw four birds. A male American Goldfinch, a male Purple Finch, female Hairy Woodpecker, and a female American Goldfinch.  We knew it was a Purple Finch because the darkish red on its head and body, and the Hairy Woodpecker because of the black and white on its head. The other two Goldfinches we recognized because of the yellow.  All of those birds we saw at once. The other days were slow but we had fun anyway. We had to record the weather onto a sheet of paper where we also put down the birds that were identified. We had to check the feeders every day and put more water in the birdbath because it froze over and we had to melt it. We also saw three squirrels and someone else in our group named them. Although the week was slow, we had a fun time watching and recording the birds. 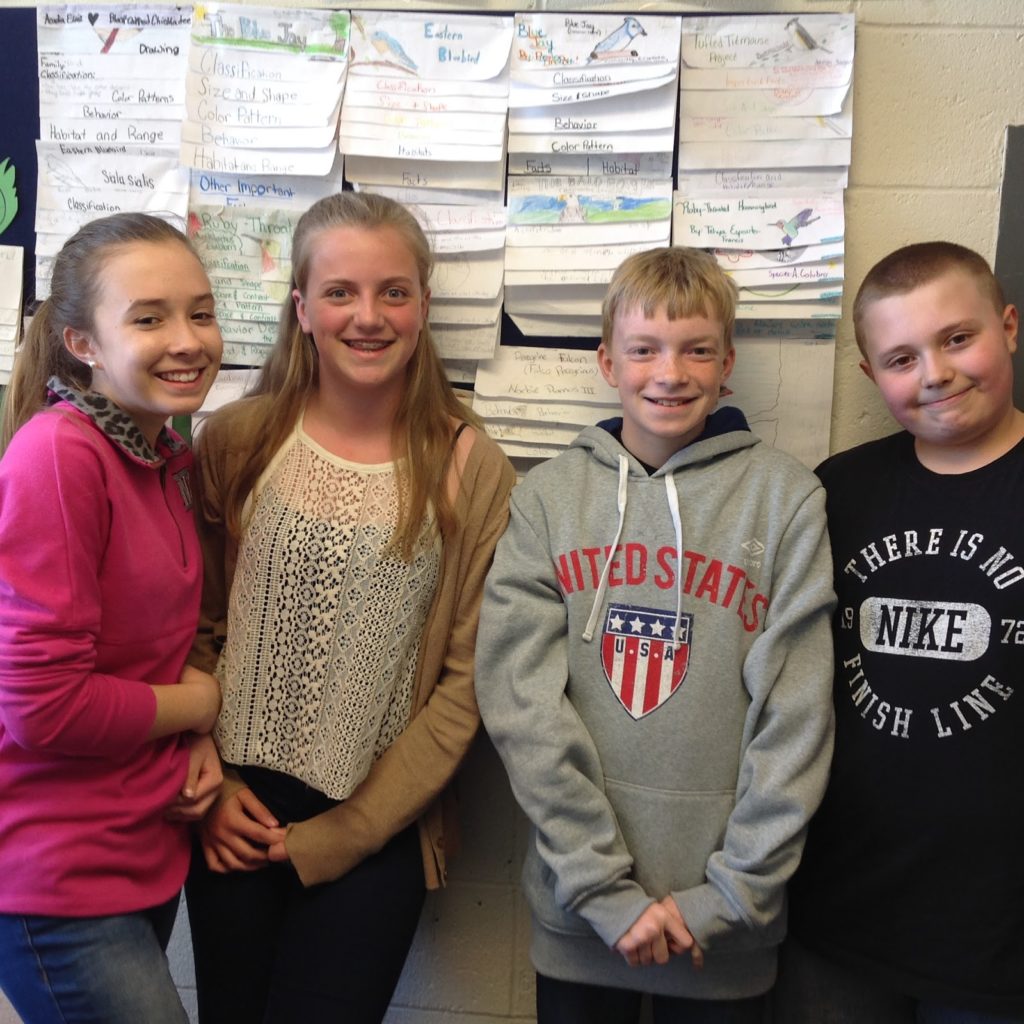