Preston: Over the past week my group and I only saw four birds. We saw a female American Goldfinch, a male Purple Finch, a male American Goldfinch, and a female Hairy Woodpecker. To figure out what the birds are we used a poster that listed some birds and then went from there. It was also helpful because it tells whether it’s a female or a male. We got to look out the window and see birds and squirrels. We filled the water in the bird bath if needed. Watching the birds was fun! We also saw a bunch of color patterns on the birds that were different. The colors are bright with the American Goldfinch, like the yellow stands out. The Hairy Woodpecker only has two colors except for the male. The male has a little bit of red on the head and a Purple Finch has some red mixed with purple. 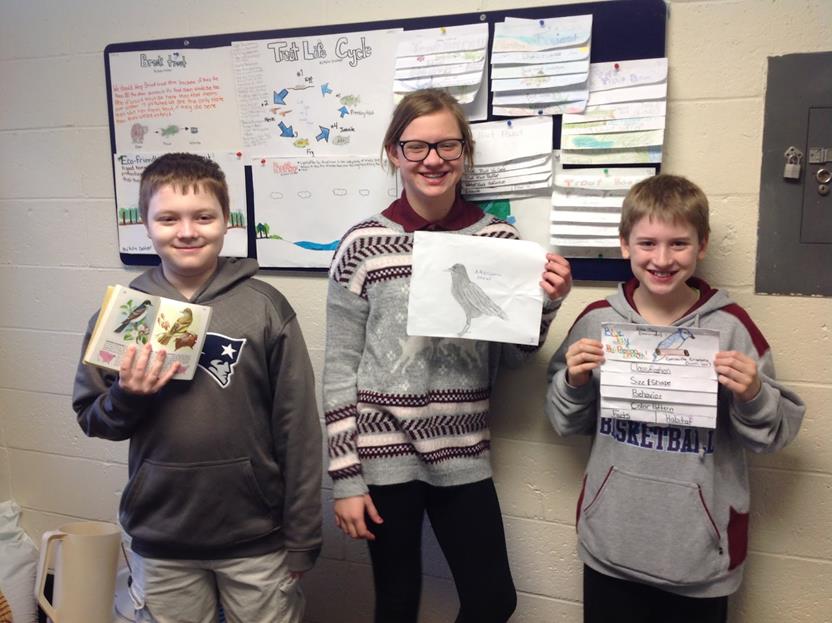 Lina: We didn’t see many birds, only four in all. We saw an American Goldfinch (male), a (male) Purple Finch, an American Goldfinch (female), and a (female) Hairy Woodpecker. We used the books and posters to find out the species. This week we went out and changed the bird bath water. It was an overall fun week for watching birds; even though we didn’t see many the majority of the time, we did see squirrels. The colors of the goldfinch were yellow, that’s how we knew it was the goldfinch. The Hairy Woodpecker is only black and white. It is interesting to see the different colors and shapes of birds.

Zach: Over the week we only saw four birds: a male American Goldfinch, a male Purple Finch, female Hairy Woodpecker, and a female American Goldfinch. We knew it was a Purple Finch because the darkish red on its head and body. We recognized the Hairy Woodpecker because of the black and white on its head. The other two goldfinches we recognized because of the yellow. All of those birds we saw at once. The other days were slow but we had fun anyway. We had to record the weather onto a sheet of paper where we also wrote down the names of the birds that were identified. We had to check the feeders every day and put more water in the birdbath because it froze over and we had to melt it. We also saw three squirrels and someone else in our group named them. Although the week was slow, we had a fun time watching and recording the birds.