We, the Mahoney Green Team, are excited about the progress of our project, which is in part thanks to the Natural Resource Council of Maine and their program. So far, we have been working with the Portland Water District (PWD) to teach sixth graders about the hydrologic cycle and water quality. They teach multiple lessons, including one describing the brook trout’s life cycle. Portland Water District helps the Green Team, which is Mahoney Middle School’s designated environmental club, by giving the team trout eggs to raise. The team then raise the trout from red-eyed eggs, through the alevin stage to fry. In the spring, typically in May, the team travels with the sixth-grade class and helps complete the Stream Side Assessment activities. 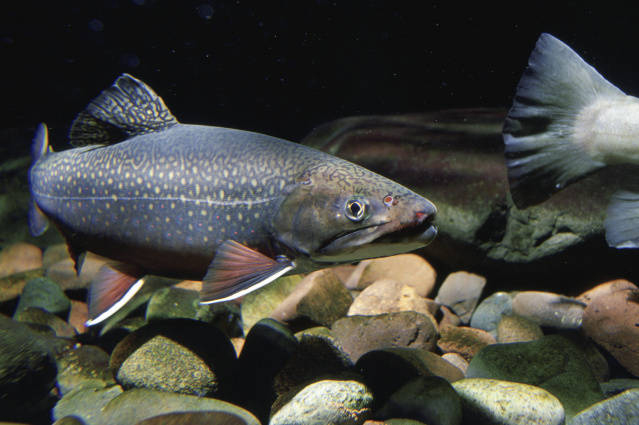 There is a certain regimen we must follow closely to care for the eggs. Every day after school, two of our Green Team club members journey to the principal’s office, where the tank resides. They take with them a binder that contains a data sheet, that they must use to record information about the eggs’ habitat. They first record the temperature of the water, which they can find on the chiller underneath the tank. We try to keep the at a constant temperature of 5° Celsius, which was the temperature of the water when we first received the trout eggs. After recording the temperature, students must then record the daily thermal units. After that, the two students test the pH, or acidity level, of the water, which is also record on the data sheet. They then test the ammonia level in the water, and record that data as well. Even fish death is a data point that must be recorded, and so far, 49 of our eggs have died. When one is found dead, we carefully extract the egg using a large pipette to remove it from the tank.

So far the sixth grade has gone to observe the fish eggs twice. The first time, they took pictures of the baby fish in their developing state. Most of the eggs seemed healthy and the sixth graders got photos from a variety of angles. It was noticed that some of the eggs, in question, had developed something along the lines of eyes. Two members of Green Team were there to help the other students see the eggs as they can be quite tricky to spot sometimes, because they are in the corners of the tank. The most recent time, students noticed that the first few eggs have hatched and were in the process of absorbing their egg sacs. All of the eggs had further developed eyes and most were developing tails! We are looking forward to seeing the fish grow into their fry stage and excited for the final release.