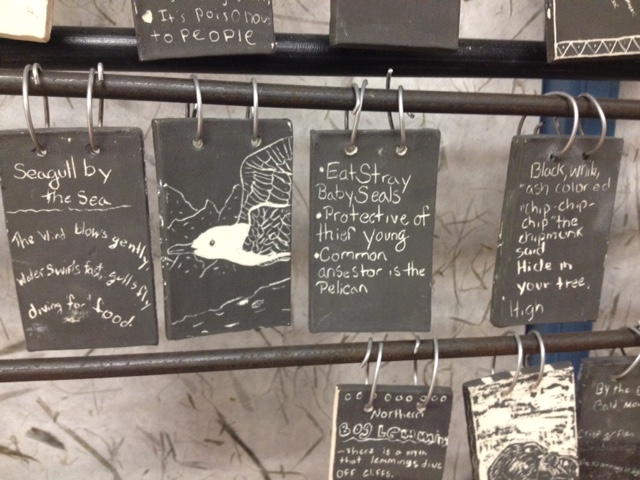 Seventh grade Camden-Rockport Middle School teacher Patty Crawford inspires her students one science experiment at a time. Whether it’s filling tomatoes with eggs through osmosis, constructing worm composting bins, sketching natural area as they change through the seasons, or releasing classroom-raised salmon, the students are engaged in hands-on learning that they are not likely to forget.

One such project this past school year has been the study of an organism that lives in a distinct habitat found in Maine. Each student was assigned an organism that you may find in a riparian zone, a hemlock forest, a scrub-shrub area, a mountaintop, or a chestnut grove. How this project took on a life of its own is really interesting.

NRCM’s small role in that was helping fund field trip transportation to these five habitats for the students to visit. Long before that happened, however, the students became very familiar with their organisms.

Aided by a grant from the Farnsworth, the school hosted a visit from potter Tim Christiansen. Together, the students created three clay panels of their organisms. One was a field journal description, the second was drawing of their organism, and the third a haiku. They took the painstaking efforts of rough drafts and time spent etching. The outcome was amazing. Their school hallways are lined with their nature art. There is talk of displaying them at Beech Hill Preserve in Rockport.

Beech Hill is the place of one of the five habitats the students visited. The other locales include the peak of Bald Mountain, Harkness Preserve, Hodson Preserve, and Ducktrap Preserve. During my visit, the students presented photos of some of the more obscure vegetation that was their organism and also shared a glimpse  under rocks for salamanders.  They talked about a moss that could be dried and munched on like chips.

Studying their organism gave them each a connection to a specific species and really made them look at the ecosystems that surrounded them. Many of them gained a new perspective and sense of place in relationship to the natural world.

If heartfelt appreciation for a millipede could happen, this project was successful at forging a real connection between nature and the next generation of caring, concerned citizens. Here is one student’s millipede haiku:

I lurk in the dirt
Feeling the earth, yet blinded
Hiding in the soil