Freeport Says No to Plastic Bags, Yes to a More Sustainable Maine!

Two years ago, two young women who had recently graduated from Freeport High School appeared before the Town Council to ask for an ordinance to ban single-use, disposable plastic bags. These two young leaders had conducted a senior project involving research about the environmental impacts these plastic bags have, particularly regarding Maine’s marine environment. Through their work, they raised the consciousness of an entire town that ultimately got behind the ordinance in a big way. 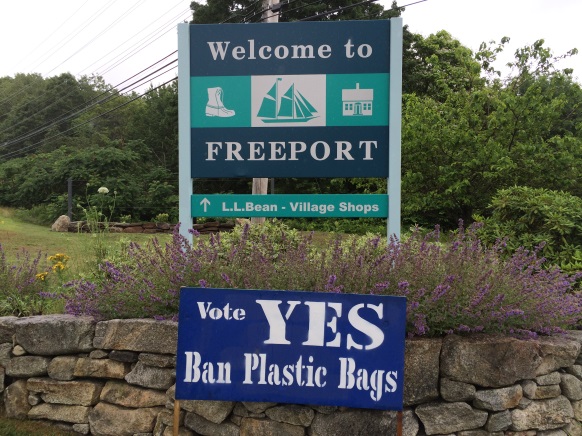 According to Worldwatch Institute, approximately 100 billion plastic bags are used and disposed of every year in the US; only 0.6% are recycled. Where do the rest end up? Who hasn’t seen a plastic bag tumbling across the roadway or dangling from a tree branch? The image is now so common as to be ubiquitous. But plastic bags also end up in landfills where they may never breakdown. Equally troubling however, is all the plastic that ends up in Maine’s coastal waters, marine wildlife and then ultimately, inside us.

According to the Marine & Environmental Research Institute (MERI) website, “It is estimated that eight million metric tons of plastic now pollute the world’s oceans. Over time, most of this plastic breaks down into tiny pieces smaller than 5 millimeters, invisible to the naked eye, which are consumed by marine wildlife and contaminate the food we eat.” In 2012 MERI, a small organization making big waves in a sea of important scientific work, developed a method for measuring how much plastic there actually is in Maine’s coastal waters. What they found was shocking. Monitoring teams analyzed seawater from Penobscot and Blue Hill Bays and found a staggering average of 17 plastic fragments in every liter of seawater! To be sure, the sources of this plastic are diverse and include things like microbeads in cosmetics. But these findings, together with other staggering statistics about plastic in our environment and our own bodies, highlight the need to reduce all sources of plastic contamination including single use plastic bags.

Shocking scientific research like that conducted by MERI is part of what motivated two thoughtful young people to ask the Freeport Town Council to ban plastic bags and ensure Freeport joined the growing list of other pioneering communities around the country and right here in Maine.

The town’s ordinance committee discussed a possible ban at its monthly meetings for over a year. Finally, in October of 2015, the committee recommended a five cent per bag fee instead of a ban. Many citizens were unhappy with this approach because a ban is the most effective way to have the biggest impact on the number of plastic bags in circulation. Therefore, after the council’s decision, a group of concerned citizens decided to continue advocating for the originally called for ban.

The group, well organized and thoughtful in their approach to the task at hand, filed paperwork for a citizen initiative putting a plastic bag ban on the public referendum ballot for June of this year. As part of their local, grassroots campaign, the group met with community leaders, businesses and other stakeholders. They also sought a $200 Sustainability Seed Grant from the Natural Resources Council of Maine.

NRCM’s Sustainability Seed Grants are designed to help groups of active, concerned citizens like those in Freeport, achieve their goals of making their communities more sustainable, whether by banning plastic bags, reducing litter or creating composting programs. NRCM was pleased to award a seed grant to the group working to eliminate plastic bag waste in Freeport. In this case, the funds were used to help these citizens get out their message about the vote.

Ultimately, the plastic bag ban passed through a public vote of the citizens at referendum with a strong majority, 62% favoring the proposal to get rid of plastic bags. This is an important victory for Maine’s environment because of the nature of Freeport’s economic engines and the demonstrative nature of this ordinance.