Editor’s Note: Alewives are river herring, a term that also includes their close relatives the blueback herring and American shad. Alewives spend most of their life at sea. In early to mid-May, alewives leave the ocean, enter Maine’s coastal rivers, and make their way upstream to spawning habitat in lakes and ponds, sometimes traveling more than 100 miles. In the summer and fall, the juveniles head back out to sea. Alewives are an important food source for bass, tuna, cod, haddock, halibut, rainbow trout, Bald Eagles, Osprey, otter, and many other wildlife. Historically, millions of alewives made their arrival, but by the twentieth century, fishing, dams, and pollution had taken their toll on sea-run fish, including alewives. Restoring populations of alewives and other herring may help other species in coastal ecosystems and are an important for the fisheries in the Gulf of Maine. NRCM has led efforts in key victories for sea-run fish, including alewives, including in the Kennebec River, where our work resulted in removal of the Edwards Dam in Augusta in 1999. This past spring, 2.8 million returned to the river. But alewife runs still face challenges in other Maine rivers and streams. Find out more about what NRCM is doing to help Maine’s watersheds and the wildlife that depend upon them. 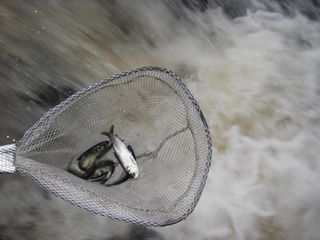 I’ve often wondered if the alewife’s defense may be their numbers and speed. The surviving offspring of these fish will stay together for their entire lives and may be joined by schools of other alewives and other species during their sojourn at sea. It is expected or hoped that as many as one percent of these fish will return to spawn in 2015.

The future for alewife is not a certainty and should not be assumed. Three principle problems plague these incredible fish. Access to spawning grounds, pollution or degraded water quality, and overfishing (primarily as by-catch in the offshore herring/mackerel fishery), are responsible for steep declines in their numbers in the last 20 or so years.

The run in Muscongus Brook and into Webber Pond was extirpated by 1970 or so as a result of the installation of a road culvert. Spawning adults could no longer gain entry into, nor pass through the length of this unnatural structure to reach the lake. The simple installation of a road culvert sadly ended this population, after having reproduced here for more than 10,000 years.

The remains of mill dams also create spawning access problems here, although much stone removal work has been done in the last 10 years. Our Muscongus Brook alewife population continues today with the seasonal installation of a fish ladder at the culvert, and state stocking of spawning adults in the pond. We began stocking the pond in 2003, and returning adults arrived in June of 2007. They have continued each year since. Returning rates vary from about 2,000 to 5,000 fish each year. Given time and culvert removal, a restored Webber Pond may see 100,000 fish in the run. 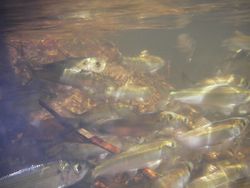 At high tide tonight I watched thousands of young alewife pour from the tea-colored fresh water into green salty Muscongus Harbor. A school had formed as far as I could see out toward the bay. This was their first taste of salt water, as they are an ocean fish, born from fresh water. This is in itself amazing. A loon dressed in its new winter plumage dove in the distance. A Herring Gull, waiting for my departure, watched me from a rock. Like seemingly endless sand in an hourglass, these small fish drained into the sea, oblivious to the gauntlet ahead. I try to remind myself that those that return will be survivors and the most fit to pass on their genes. I told myself that these special fish are here to feed everything, for the good of all wildlife. However, these thoughts did not quite feel like consolation enough to this worried parent watching them head out to sea.

David Wilkins is a sailor, boat builder, and naturalist living in Bremen, Maine. He studied wildlife biology at University of Massachusetts at Amherst. Fly-fishing, fish watching, and bird watching are some of his pastimes. Early exposure to declining commercial fisheries has led David to become a staunch fisheries conservationist today. 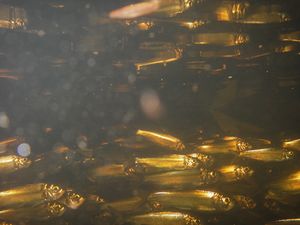 For more about the alewife, read our Creature Feature.

Watch NRCM’s short video about the alewife run on the Sebasticook River (a tributary of the Kennebec).

Watch our short video celebrating the 10th anniversary of removal of the Edwards Dam.

Watch this short NRCM video about David’s efforts, made in 2010.

All photographs in this post by and courtesy of David Wilkins. They may not be used without his permission.