You would think the cold created a woods devoid of life, frozen, if you will, until the spring thaw brings warmth and energy back to Little Moose Mountain. You would be wrong! 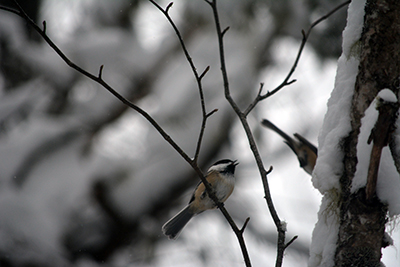 Throughout most of our hike, the calls and chatter of Golden-crowned Kinglets, Black-capped Chickadees, and Red Squirrels rained down on us from the treetops overhead. We squinted to make out their forms, but though they remained difficult to see they were definitely easy to hear, even over the high whistle of the gusting wind. To me it’s always miraculous that such tiny birds can thrive in these northerly latitudes and high elevations.

These small songbirds are adapted to the cold conditions. During the winter months, they switch from diets composed largely of insects to nuts and seeds—which are still plentiful even when covered under a few inches of snow—as well as what berries and insects they can find. Red-breasted Nuthatches, for example, will even cache seeds earlier in the year to eat during the winter. By contrast, Hairy and Downy woodpeckers (when not coming to feeders) go after the insects within tree trunks and branches, as well as some plant materials, like grains and berries. Feeding effectively is particularly important, as they all need to store fat reserves in order to survive frosty nights. 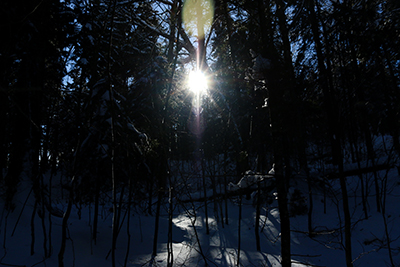 Sun streaming through the tree trunks

We hiked for 1.5 miles up the ridge before our fingers and toes began to numb. Though 1.5 miles would take barely 30 minutes on flat, clear terrain, the frequent camera stops and snowy paths meant more than 90 minutes had passed since we had entered the trailhead. As we turned, I found myself humming “Walking in a Winter Wonderland,” though Christmas had passed mere days before.

For the return trip we both carefully put our cameras away and folded the legs of the tripods. Thank goodness. I slipped twice, landing with a gentle thud on the snowy ground. I wasn’t hurt, but one bad bump and my lens might have been broken!

By the time we returned to the trailhead, it was nearly dark. After a quick dinner at a local restaurant, we hit the sheets early to prepare for an early morning exploring the Moosehead region.