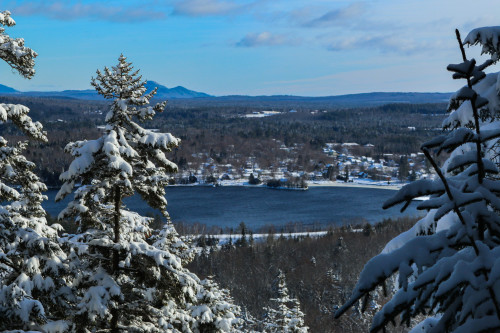 It had been almost exactly a year since I had last seen snow. As we drove to Moosehead Lake in the North Woods of Maine, we definitely didn’t have that problem. Despite an unseasonably warm December in the state, we were driving the day after the winter’s first blizzard, and anywhere between five and eight inches of light, fluffy snow had built up on the side of the road and on top of the pine trees. The temperature was hovering around eleven or twelve degrees F, with a wind chill that brought it easily below zero.

Moosehead Lake is the tributary to the both the East and West Outlet of the Kennebec River, which come together at Indian Pond. Draining over 1,000 square miles and covering over 75,000 acres, Moosehead is the largest lake east of the Mississippi. Rimmed by mountains, the region was first home to different Native American tribes; in the 1800’s Henry David Thoreau visited the area, and in the 1900’s the region was dominated by the logging industry. Today it is the “gateway” to the Maine North Woods, and known for its fishing, hunting, snowshoeing, cross country skiing, and downhill skiing. It is also an area tense with controversy, as I would soon find out.

Dr. Lindsey Rustad joined me for the winter expedition, a climate scientist and forest ecologist in charge of running the Hubbard Brook Experimental Forest in New Hampshire. Conveniently, she’s also my mother! (The apple didn’t fall very far from the tree.) Our plan was originally to cross-country ski the edges of the lake, as far as we could go.

However, plans are meant to be changed! The warm December meant ice hadn’t even begun to form on the lake yet, and to avoid drowning we had opted to hit as many spots along the lake as possible, plus hiking up a ridgeline to get a bird’s eye view of Moosehead.

There is nothing like new snow. Snow comes in many forms, but the cold temperatures kept what had fallen light and fluffy. Everything look frosted, and as we stepped out of the car at the Moose Mountain Inn I shielded my eyes against the bright sun and even brighter reflection on the snowpack. 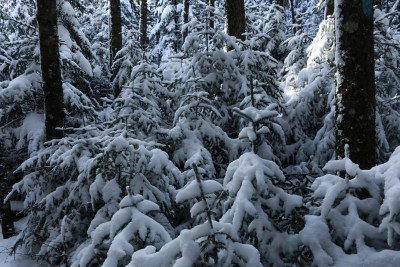 Single-digit temperatures are cold. To combat the chill, I had on special, thick socks, heavy boots, thermal underwear, jeans, an Under-Armor shirt, a long-sleeve shirt, a heavy arctic parka, a neckwarmer, wool hat (that I knit myself!), and heavy gloves. I felt a little bit like the Pillsbury Dough Boy, but even as the wind whipped the hair around my eyes, I felt comfortably cozy.

To start the trip, we wanted to hike up Little Moose Mountain to get a view of the lake. Think you can’t hike with snow on the ground? Think again! Much of the trail was shaded by the limbs of tall pines, and the wide branches held most of the snowfall aloft, leaving just three or four inches on the ground. The going was tougher than if the trail had been clear, but we could do it.

In addition to my many layers, I carried my camera, an additional lens, an extra camera battery (cold can quickly drain camera batteries), and a tripod, which from time to time I used as a walking stick. The climb itself wasn’t too steep, and I opted to walk up with my camera around my neck and tripod tucked under my arm – the frequent stops to take photos and videos meant I could catch my breath! There was an additional slip factor with the snow obscuring ice on the path, so I was risking a fall right on my camera lens, but that was a risk I had to take.

The scenery left me giddy. The white of the snow made the interior of the forest almost monochromatic, like a living black and white image. Smaller trees were nearly completely buried, bent over with the added weight on their thin forms. As we walked we crunched the snowflakes beneath our feet, leaving heavy footsteps to trace once we returned. A break in the needled canopy let bright sun filter in, lighting up the understory; in areas with open sky the brilliant blue was unbroken by anything except the tops of the trees. It was a landscape of contrasts, so different than the deep browns and greens characteristic of these boreal forests in the summertime. 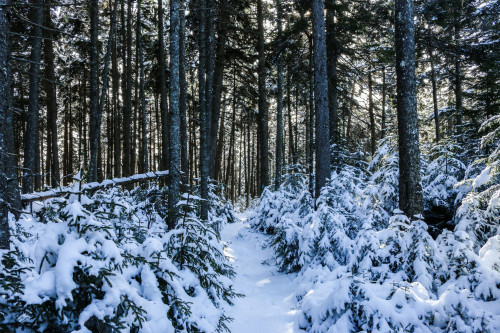 A trail through the woods

And yet, here and there hints of green life peaked out. When we pulled ourselves up over rocks, we pushed aside snow and revealed hand-sized ferns dangling off the stone precipice. They will eventually brown and wilt, but the winter temperatures were so recent, the snow so new, that they still glowed emerald.

Only a few minutes passed before we reached out first look-out, designated clearly by the placement of a wooden picnic table. Moosehead Lake was already far below us (the trailhead began partway up the ridge), a deep blue contrasting with the grays of the snow-covered woods and the purples of the surrounding mountain peaks in the distance. The chilly air was perfectly clear, and we could see for miles.