For our final day, we journeyed up the west side of the lake. Though The Birches Resort was our final destination, we made multiple pit-stops to explore the shoreline on the way there and back. 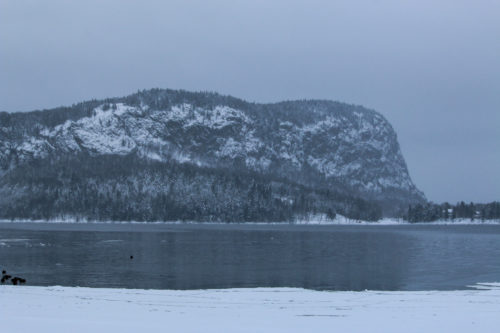 First stop: Rockwood’s public boat launch facing Mount Kineo. In the summertime, this area on the water is alive with human activity, a ferry transporting hikers to the base of the mountain and back. During our winter morning, however, it was the ducks who stole the spotlight. A large flock of Mallards rested on the ice and floated nearby in the open water. Just looking at them made me cold!

As we looked across the lake, it began to snow again. Just a few minutes before the outline of Mount Kineo had been clear against the cloudy sky, but now faded into a general haze.

Though Moosehead is famous as a summer destination, many accommodations are open in the winter and cater to cross-country ski enthusiasts and snowmobilers. The Birches, open 365 days a year, was our next stop, and the managers let us explore the property while they made preparations for their New Year’s celebrations. Inside, an impressive wood-paneled dining room, warmed up with a stove, looked out onto the freezing lake. Trails behind the cabins were groomed both for snowmobilers and skiers, and when the lake is completely covered in ice visitors can walk or ski across it. 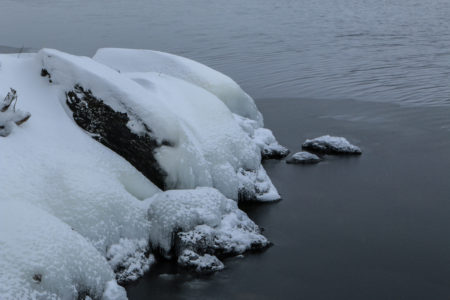 The freezing edge of Moosehead Lake

We trooped past the wood piles, through the snow, and to the edge of the water. Similar to the day before, the ice was literally solidifying before our very eyes, sending crackling sounds to the wind. Across the lake, a mountain silhouette contrasted with the bright sky.

While it would have been fun to enjoy the New Year’s party, we had to continue on. After a brief look at the rushing waters under the Brassua Dam, we parked next to one of Moosehead Lake’s outflows: the East Outlet.

A lone road bordered the river, cleared of trees but covered in a few feet of snow. To both sides pine trees were absolutely covered, their branches weighed down by the crystallized water. Though there was color in their needles, the landscape appeared black and white to my eyes, only broken by the crimson of my mother’s coat and hat. Even my jacket was black! 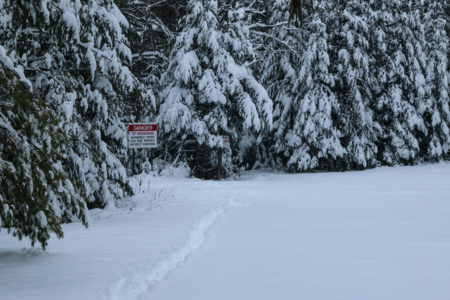 Walking was slow going, but I didn’t mind. Here and there the woods opened up to amazing views of the steel-gray water, dotted with white rapids. A campsite, complete with two picnic tables, sat at the edge of the river, promising incredible views and fishing come warmer months. A few tree trunks had been gnawed by beavers, and I wondered where their nearby lodge was located.

Plopping myself down in a snow drift, I took a final moment to close my eyes and listen to the Maine North Woods. Besides the rushing current, the breeze blew gently through the laden trees, which swished and creaked under their icy burden. I heard the crunch of snow under my mother’s boots, and the high-pitched calls of chickadees. Taken together, everything sounded like winter!

Back in the car, we headed south to Portland, where I would catch a flight out the next day. Stay tuned for adventures from my spring expedition to the headwaters of the Saint John River!