When I think of Day 2 of my winter expedition, one word comes to mind: snow. 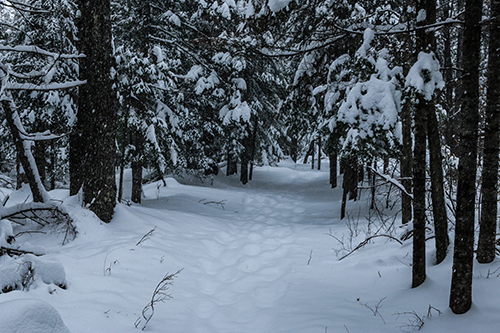 The flakes were large and falling fast and furious when we woke up, continuing throughout the day. This was a real Maine winter storm, and it was beautiful.

We travelled to the eastern side of Moosehead Lake to trace the shoreline in Lily Bay State Park. Given the large drifts, my mom and I each strapped on a pair of sturdy snowshoes to maneuver our way down the trails. The temperature was still hovering in the low teens, and my outfit consisted once again of many layers.

Snowshoeing in heavy snow is hard work though, and soon I was not only warm, but sweating. Well, except for that moment when a tree branch overhead dumped a clump of wet ice right down the back of my exposed neck! That took awhile to melt. 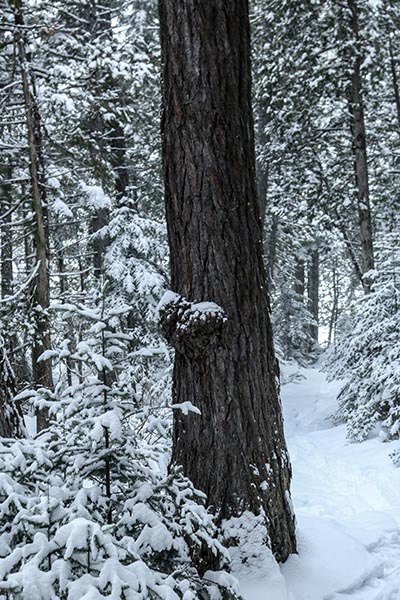 An impressive tree if I’ve ever seen one!

As we plodded along at a leisurely pace, I marveled at how I could literally hear the storm. Imagine a gentle tinkling of snow falling on more snow, a slight whoosh in the air as the wind blew the weighed-down limbs, and the trunks creaking as they swayed slowly from side to side. The forest was singing a soft symphony, the song of the Maine North Woods.

We weren’t alone. A multitude of tracks told us deer and hare had recently crossed the path, and one lone Hairy Woodpecker drummed tree bark looking for live insects to feast upon and keep up its body heat. Now and then the call of a chickadee sounded, demonstrating their cold-weather fortitude.

The trail touched on the shore of the lake here and there, and we were treated to a wide, gray vista. The ice was still forming along the surface, leaving dark streaks of open water towards the center of the great expanse. The snow fell so heavily that the opposite side of Moosehead was mostly obscured behind a curtain of white, leaving us to imagine the gentle contours of its icy border.

By far my favorite element of the Lily Bay snowshoe was a giant hemlock tree sitting right next to the trail we followed. It was the biggest hemlock I have ever seen, its horizontal branches wider than many of the surrounding tree trunks. The bark was thick and rough, and I couldn’t resist taking my glove off and running my fingers along its rough exterior (only for a moment though, because after that my fingertips started to freeze). Even when I craned my neck, I couldn’t make out the top of its boughs. 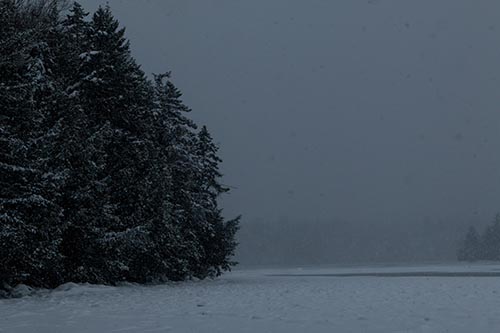 A view of the lake

Because of the inclement weather, the roads started to turn icy and dangerous. Upon returning to the car after hours in the park, we stopped at a few more river view sheds before returning to the hotel. Stay tuned for Day 3!