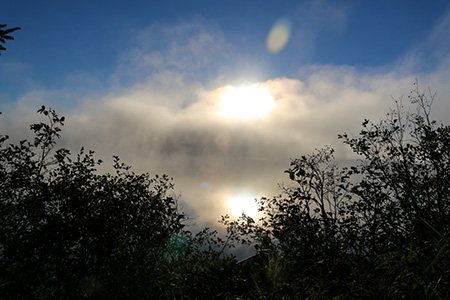 View of Third Lake at Dawn

Going to sleep early means waking up early, and we stirred just after the sun had begun its ascent. A layer of frost had developed on the outside of our sleeping bags and tent, but I was actually quite warm in my long underwear pants, jeans, fleece button-down, fleece vest, jacket, winter jacket, knitted hat, and knitted mittens. Clearly, I am a fan of layers!

I dug my camera out of its bag and headed straight to the edges of Third Lake. The water was warmer than the air, and a thick layer of mist rose from the surface. The sunlight had begun to cut through the fog, and I took one of my favorite photos of the trip.

We took our time making a fire and eating a breakfast of oatmeal and instant coffee, sitting silently and slowly shedding layers. However, I had a hard time eating more than two bites at once because I was constantly jumping up to pursue new bird calls.

The birds were the most active I had heard them on the entire trip. Red-breasted Nuthatches and Black-capped Chickadees buzzed at each other, while an entire flock of Yellow-rumped Warblers came down from the tree tops to check me out. I even caught a quick glimpse of a Blue-headed Vireo, another migrating species that would soon begin a long trip to the southern United States and Mexico for the winter months.

Eventually the birds moved on and we loaded up the canoe, paddling back to our original entry point and then lugging our things up the hill to the car. We made it through the beaver bog, but without Joe to guide us took a wrong turn down a logging road once or twice. As we drove we flushed other birds, including the Ruffed Grouse and Northern Flicker, as well as Boreal species like the Gray Jay. We saw quite a few Blue Jays too, and it was interesting to be in one of the few places where the geographic ranges Blue and Gray Jays overlap. 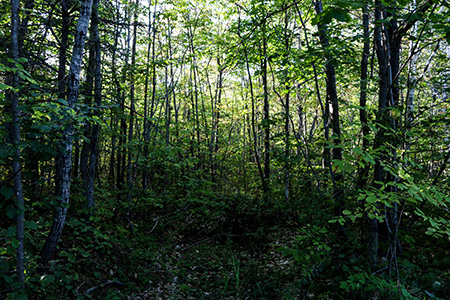 We arrived back in the campground for lunch, and then parted ways for the afternoon. Brian aimed to fish more along the Penobscot, and I wanted to take a quick trip up the road to explore the Katahdin Woods and Waters Recreation Area. Encompassing around 100,000 acres, the recreation area is divided into two parts, one that allows hunting, and one that doesn’t. I chose the non-hunting area closest to me, with a trail along the Penobscot River.

The path looks like it used to be an old road, grown over with grass but comfortably wide. Near the parking lot stood a large beaver lodge, easily over ten feet tall. The water had recently been drained from the bog, leaving a moonscape-like landscape where the dirt had once been covered. Though the lodge was probably not used by beavers anymore, it was still very impressive!

The river itself was beautiful of course, a mountain view in the background and bright trees that had turned even more colors since I had arrived a few days earlier lining the banks. Still, most of the trees remained green, but I had fun taking photos and videos of the afternoon light as it filtered through the canopy.

The leaves were alive with giggling Black-capped Chickadees. The state bird of Maine, these tiny passerines are year-round residents, and always a bundle of energy. Since they are so active it is almost impossible to catch them still enough for a photo, though I keep trying. I was hoping a few more migratory species would be flocking with them, but it seemed most of the warblers and other migrants had already left for the season.

The sun descended further, and I headed back to my car. As I continued walking, I heard a loud splashing. Right away my brain jumped to one word: “Moose.” They are known to feed on aquatic plants within rivers, and I knew the splashing could mean a moose was feeding just around the corner!

I crept forward, my camera poised and ready. Inwardly cursing at the crunch of leaves and pebbles beneath my hiking boots, I barely breathed to reduce the noise I created. The splashing sound was coming from around a patch of shrubs at the edge of the water, and I leaned out as far as I could, ready to see the moose. 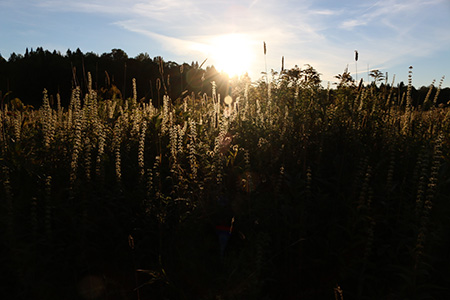 Only, there was no moose. There was nothing at all. That interesting splashing sound I had heard was emanating from a few raised rocks, and I had been tip-toeing around for nothing! Woops. Luckily no one had been around to see me.

Before turning in for the night, I drove slightly farther and into Baxter State Park, the biggest and arguably most impressive state park in Maine. Though it is most famous for Mount Katahdin, the end point for the Appalachian Trail, I found a gorgeous natural field. I stayed until it was almost dark, mesmerized by the sunlight streaming through the grasses and remnants of wildflowers from weeks before. I may only have had a taste of Baxter, but it was a beautiful one.