The second day of the four-day excursion dawned bright, if a little cloudy. Still, the forecast didn’t call for any rain, and the temperature remained in the sixties and seventies all day. Perfect. 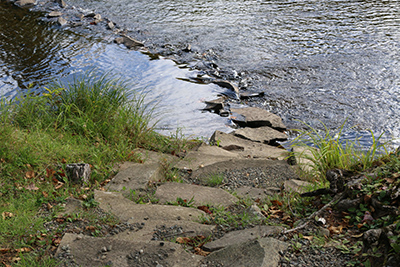 East Branch of the Penobscot. Photo by Erika Zambello

Morning gave Brian and me a few hours to explore the East Branch of the Penobscot at the Matagamon Wilderness Campground, situated on both banks of the river downstream from the lake itself. I instantly fell in love with the campground. We had stayed in one of their cabins the night before, furnished simply but nicely; more importantly, it had heat and plenty of warmth on a cold North Woods night.

Though we had brought in our own food supplies, we couldn’t resist a breakfast made in their polished wood dining room, complete with stuffed native Maine mammals like deer, fox, and black bear. Since we were in the middle of bear hunting season, most of the other guests at the campground were searching for these very bears!

After breakfast Brian tried his hand at nymphing in the Penobscot. Walking down to the shoreline underneath a bridge over the river, he pulled on a pair of waders and strode carefully into the rushing current. Nymphing, a fly-fishing technique, earns its name from the small nymph imitations tied at the end of the fishing line. The fly sinks, and as Brian pulls it towards him underwater, the fish mistakes the fly for an aquatic insect and goes after it. That’s the idea anyway; though Brian caught fish later in the trip, he struck out on our first morning.

I was also on the wildlife look-out, only in my case it was for birds. In addition to spotting year-round residents like the Hairy Woodpecker and Red-breasted Nuthatch in a birch tree outside of the campground’s dining room, I discovered a flock of Yellow-rumped Warblers near the river. Yellow-rumps are known jovially as “butterbutts” due to the yellow patch on their backs visible when they fly, and are neotropical warblers who breed in the United States but migrate as far south as Central America for the winter. Because it was late September, the birds I saw were probably just about to make their journey, and had lost their brilliant breeding colors or sported the dull olive-brown of first-year juveniles. 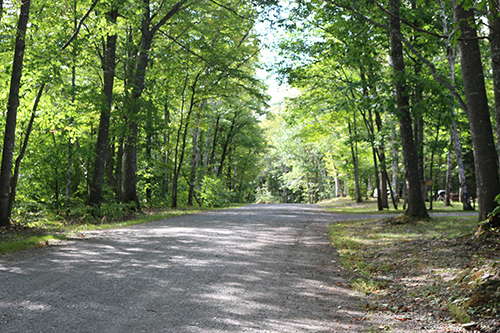 Around noon we headed off to meet Joe Christianson, whose family runs the campground and who was returning from a woods excursion with some of the hunters. In order to hit Third Lake, the next stop on our headwaters itinerary, he had to show us the way. We had already visited the headwaters to Fourth Lake, Fourth Lake itself, and the outlet stream the day before, and our next goal was the much larger Third Lake and its corresponding inlet and outlet. 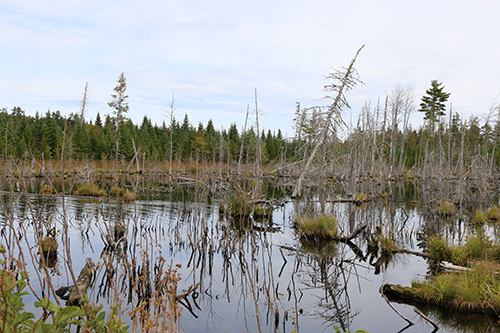 To get there, we traversed dozens of dirt logging roads, meeting Joe by a small clearing. As we crested rolling hills we paused for a moment, looking over the forest below and the mountains in the distance. The terrain was steep in many places, and beavers were clearly plentiful because their bogs bordered the road wherever flat land existed. In fact, in one spot a beaver bog had swollen to such a degree that it easily covered the road in two to three feet of water. Joe was in a large truck and we followed behind in a four-wheel drive Ford Explorer, but still I clenched my fists and held my breath as we plunged through, small waves lapping above our tires.

Back on the other side of the bog we still had more distance to go before finally parking at the top of a hill completed covered in a thick array of raspberry bushes and other tall grasses. Still following Joe, though now on foot, we bush-whacked down a long-overgrown road, cut through pine trees, and made it to the edge of Third Lake’s inlet. A green canoe was waiting to take us to Third Lake.

After showing us the boat, complete with a few bear-tooth holes, Joe waved and was off, the sound of his motor slowly fading in the distance. Alone, Brian and I looked at each other, then began the process of lugging our gear from the car down to the canoe: we were spending the night.