Brian and I were up and on the water at Lake Matagamon just after sunrise. We had rented a motorboat from the Wilderness Campground, giving us the freedom to move longer distances. Like Third Lake the morning before, mist was rising from the water and shrouding the lake’s islands with a mysterious fog.

Lake Matagamon includes both First and Second Lake, first dammed using timber in the 19th century, which was then replaced by a concrete dam in the early 1940s. The lake is large, its impoundment around 4,200 acres and its drainage area just under 500 square miles. 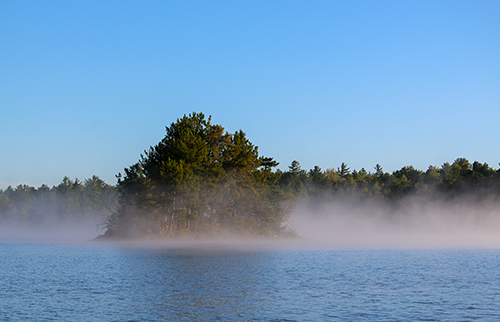 Birds were everywhere on the lake. One tiny rock island was covered with gulls and Double-crested Cormorants, while Common Loons dotted the water. In one sheltered cove we spotted a flock of Canada Geese, as well as a lone female Wood Duck. In fact, one of my favorite things about Lake Matagamon is that I saw so many more birds than people! Other than one or two fishing boats, we had the shores to ourselves. 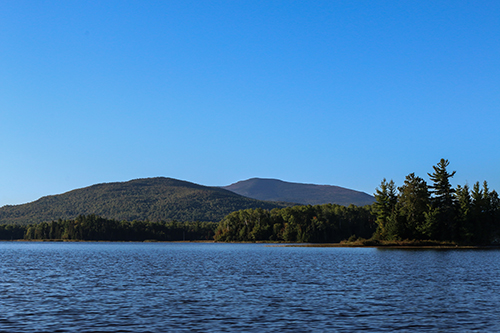 Our goal was to motor to the other side of the lake, then hike a short distance to Grand Pitch, a unique waterfall. After anchoring the boat we headed into the woods, where we found a breathtaking forest.

Grand Pitch was impressive, water rushing and rushing over the rocks. The waterfall created so much noise that Brian and I had to literally shout to make ourselves heard, and I wondered how high the water would come up during a rainstorm. Though not tall, the rocky banks formed a narrow entryway, forcing the water through and thus increasing the pressure and flow. A small rainbow arched over the spray, adding additional color to the scene. 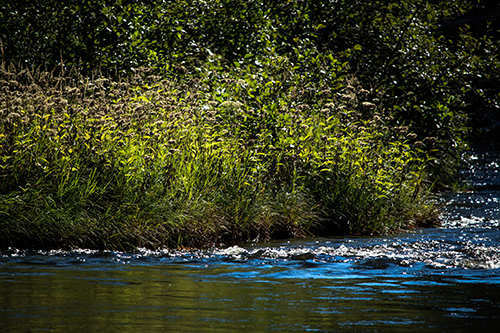 Flowers in the sun near Grand Pitch

Beneath the falls Brian waded into the river, one of the multiple tributaries for Lake Matagamon. He cast using his four weight rod, letting the fly drift in the current. Though his first fish was a Chub, on his second hook-up the fish dramatically leaped out of the water with a brilliant splash: he had a Land-locked Salmon!

Anglers prize opportunities to fish for salmon. They can reach impressive sizes in Maine rivers, and their propensity to jump and maneuver when caught makes them a perpetual challenge for fly-fishermen and women. I could tell from Brian’s giant smile that he was thrilled with his catch, and we paused for a photo before he gently slipped the fish back into the water. Throughout our Maine North Woods trip we had caught Eastern Brook Trout, Chubs, and Land-locked Salmon – a trifecta of species.

It was hard to leave the woods, but our schedule was calling, and we still had a five-ish hour drive to the Portland airport.

Before we left the lake, we pulled up to one of the small, forested islands complete with a pebble-filled shoreline. Brian made us a quick lunch, pouring boiling water into our freeze-dried lunch packs. While he fiddled with the food, I explored. The trees were loud with more Red-breasted Nuthatches, and a butterfly visited small blooming wildflowers. Amidst the stones I found a pair of horse-shoes, reminding me of the centuries of human habitation in Maine. 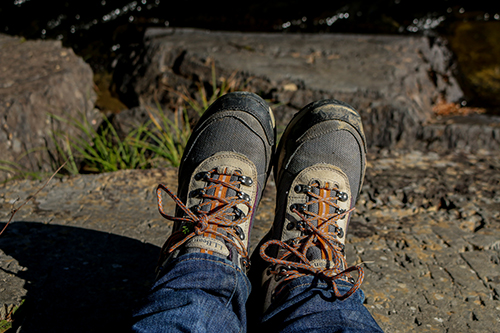 Sporting my Bean boot by the river

Reflecting on my trip, I still marvel at the beauty of the North Woods. Following the headwaters and one tributary of the East Branch of the Penobscot was particularly gratifying, as I could follow the small stream until it eventually joined Lake Matagamon and became the Penobscot itself. Seeing the vegetation and wildlife that depend on these streams and rivers reminds me of the importance of protecting these resources, now and in the future.

My simple answer: “Everyone!”

Whether you are looking for remote camping experiences, like Brian and I found on Third Lake, or prefer sleeping in a heated cabin, like at the Matagamon Wilderness Campground; whether you want to bird or fish or paddle or hike; whether you seek mountains, rivers, lakes, or streams; there is something for everyone. Above all, the woods are amazing in and of themselves, and as I left to return to my “every day” life a part of me felt fully refreshed, reinvigorated, and rejuvenated.