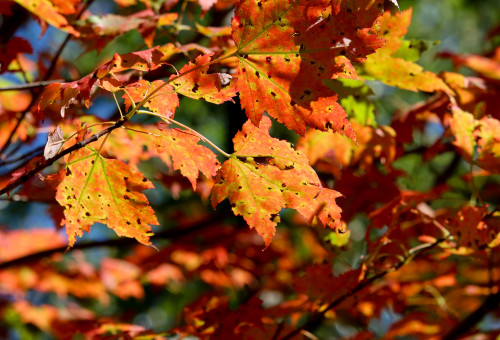 After a late night flight in to Portland and a five-hour drive, I was finally in the Maine woods. Less than 24 hours earlier I had been on the west coast of Florida, and the contrast between the white sand beaches and the dark, pine-covered mountains was stark, but beautiful. The Maine woods landscape will always be my favorite.

Over the next four days, Brian Whalen and I would trace the headwaters of the Penobscot River, which eventually flows into the Gulf of Maine. This river is contained entirely in Maine, and stretches over 100 miles. The Penobscot is important for numerous fish species, and popular for anglers along both the East and West branches, as well as its entire length. In the 19th century the river was important for the transport of logs from the Maine woods to market points, and in the 20th century served as a source of hydropower for paper mills and other factories. Since the turn of the 21st century, these industries have drastically declined, and the Penobscot is becoming even more important for the recreational opportunities it provides visitors and locals alike.

Now, the Penobscot comes from the conglomeration of many rivers, not just one, but this stream was still tiny to my eyes. On one side of the logging road we used to reach the water, the stream was slow moving, almost stagnant, and barely ten feet across. A hill sloped down to the water’s edge on one side, covered in bright green moss and underneath the shade of some very tall pine trees. It was sunny and clear, and light streamed through the pine needles above, creating a beautiful pattern along the forest floor. 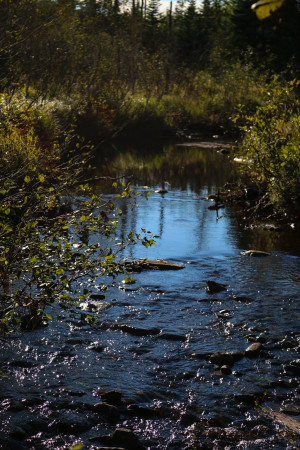 On the other side of the road, the current flowed more rapidly. Brian quickly unpacked his fly-fishing rod, a four-weight, and cast into the small ripples in hopes of coming up with a little trout.

While it is possible that people love fishing as much as Brian, I can say with absolute certainty that no one loves it more. While he had been fishing his entire life on the western coast of Florida, he had been fly-fishing now for about five years. Fishing both inspires and calms him, and he had been fidgety our entire trip up to Maine, excited about getting on some new water. I understood how he felt. Though I don’t have quite the obsession that Brian does, my father is a registered Maine fly-fishing guide, and he taught me to fly-fish when I was only seven or eight years old.

Brian had little luck with the fish, but as he watched the water he spotted a small, dark shape slink out from the underbrush. A Mink, probably looking for the same fingerlings as Brian! He tried to call out to me to see the animal, but the movement spooked the creature and he scurried back into the protection of the woods.

Mink are always fun to see. They are relatively small, reaching between a foot and a foot and a half in length. They are carnivorous and semi-aquatic, which means that in addition to feeding on terrestrial species like birds and rodents, they also go after fish, crustaceans, and amphibians. Though there are plenty of mink throughout Maine, their small size and somewhat secretive nature can make them difficult to see. 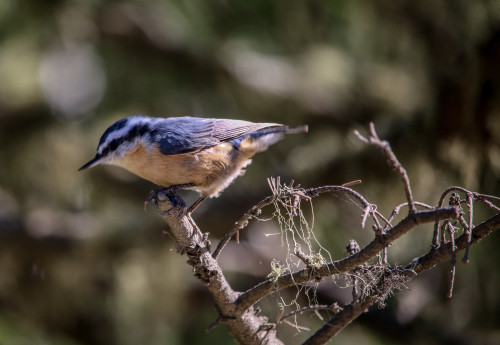 Mink weren’t the only active wildlife. Bird calls echoed around us, mostly those of the year-round resident, the Red-breasted Nuthatch. Nuthatches are found throughout the United States and Canada, living year-round in the more northerly latitudes and regions of the southwest, and moving as far south as Texas and Florida in the winter. Though they eat mostly insects in the warmer months, by the time I saw them in late September they had mostly switched to seeds.

These little birds were so curious that they landed mere feet from me, peering close before flitting off again. Throughout our trek in the North Woods they became the staple bird species, the one that was with us wherever we went.

Following the logging road, we wound down the stream to Fourth Lake, a long, shallow expanse. Only one house sits on its shores, and so I used a kayak to explore the lake. Because the water was only a foot deep in most places, I could easily see the bottom; the earth was a deep red color, contrasting beautifully with the green and yellow aquatic grasses as well as the straw-colored grasses along the shore.

I had been expecting to see a lot more reds and yellows during my trip. It was the end of September, normally a prime fall foliage time of the year. However, a very warm August and September had set back the clock so to speak, and though there were a few patches of colors here and there, we mostly saw green leaves and trees.

Our final stop for the day was the outlet stream below Fourth Lake. It was cold and clear, running at a chilly 65 degrees. A rocky streambed created little ripples and rivulets, and light danced on the tiny waves created by the current. It may be chilly for us, but it’s great for trout. Brian took a few casts and waded downstream, while I found freshwater mussels a little farther upstream. When we turned over a few rocks, we found aquatic nymphs clutching the stone, making up essential components of the stream’s food chain.

The sun began to set as we headed to the Lake Matagamon Wilderness Campground, where we would be spending the night alongside the Penobscot itself. To get there, we drove on more logging roads before eventually hitting pavement once more.

Stay tuned for the next installment of A Quest for Protection: The Headwaters of Maine’s North Woods!