Hiking the AT — Thoughts from Two Recent Thru-hikers

Miles and Liesel recently completed their first thru-hike of the Appalachian Trail (AT). I caught up with them as they start to settle back into a “normal” life back in Maine. —Daniel Bartup, NRCM Rising Leadership Team member

Why did you hike the AT? 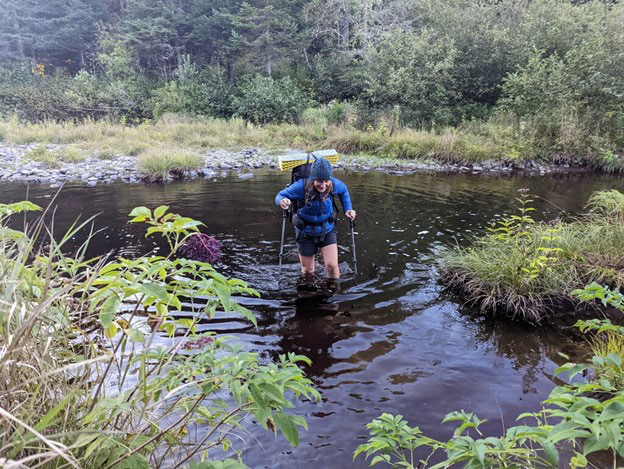 For Liesel, the AT began as a childhood dream. She committed to hiking it for real sometime around Christmas 2020. I committed to hiking the trail with her in early May 2021. For both of us, the challenge was appealing, as well as the ability to step back from our lives and recalibrate.

Did you train at all before you started?

Neither of us trained specifically for the AT. We both lived active lifestyles, with Liesel being an avid hiker (completing all of the NH 48 in 2021). We both had a reasonable baseline fitness to begin with.

What item/ items became essential that you didn’t expect?

For me it was a bandana around my forehead. Having sweat pour down my face and run into my mouth through my ever-growing mustache was a much larger psychological drag than I could have expected. Many hikers use a sweat rag, which hangs from a pack strap, but I found using that to wipe my face broke my natural rhythm and was reactive, rather than proactive. Tying a bandana around my forehead was an absolute game changer.

For Liesel, having a dedicated sit-pad became more than a luxury item. For short trips, sitting on logs, rocks, or the ground is just part of the experience. When you live in the woods, having a slight cushion under your always-sore legs, and a barrier against the wet, cold ground is less a luxury and more a necessity. 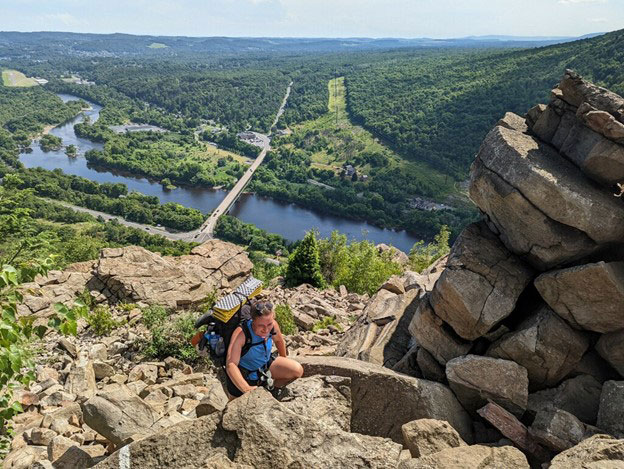 If you could start again would you do anything differently?

We got off trail three times for weddings during the summer. Each of them was important to us, but the combined weight of them slowed us down by about three weeks. We decided if we do another thru-hike, we will not get off trail for weddings or similar events (especially since other long trails are farther from home).

The other major changer we would have implemented was to hike faster and farther early in the trail, and to relax and enjoy more town days later on. Our approach was the opposite of that, and between our three-week lag because of weddings, and the amount of time we spent relaxing in the beginning, we didn’t have time to enjoy our surroundings in the north as much as we would have liked.

What was the hardest part?

Physically, the most difficult section was the White Mountains and southern Maine. The terrain there is an order of magnitude more intense than the rest of the trail, and equally more rewarding both in terms of a sense of accomplishment and in natural beauty.

Mentally, the hardest part of the trail was central Virginia. Across a section of nearly 200 miles, we had to battle sickness, the loss of two close friends who went home, the death of a fellow hiker, and some oppressive heat and rain, which lent a feeling of inescapability to our circumstances. We suffered through much of this without our “tramily” (trail family), as we lagged behind them each time one of us got sick. Catching up to them at last marked, notably, a significant lightening of our mental burdens. 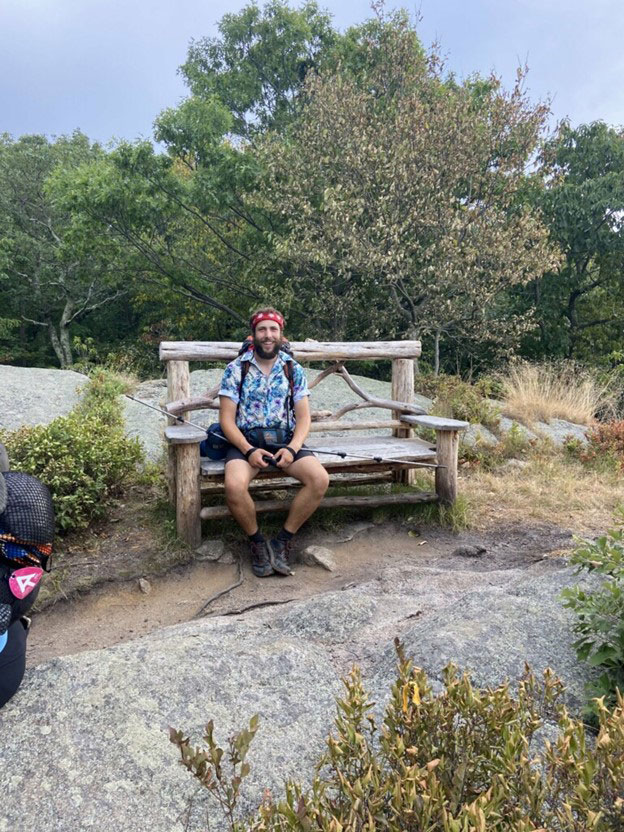 How did you combat homesickness? How did you keep going through the hard parts when you were probably thinking you could easily quit and go home?

Fortunately for both of us, homesickness was never something we had to deal with. We were both out there with a sense of purpose, and we were always together. Because of this, going home was never an option either of us considered. When we were discouraged, we knew the best way out was to hike harder and faster to make it to the end.

How does the Maine stretch of the AT compare to the rest of the trail?

The Maine stretch of the AT feels more distant from civilization than the rest of the trail. The first section of Maine is extremely rugged and lives up to its reputation as the hardest part of the trail. Farther north, the trail flattens out and feels much more restful than anything from the previous several hundred miles. The old growth forests are captivatingly beautiful. The exposed rock, moss, and bogs that characterize many of Maine’s peaks are unique to the Northeast, and most common in Maine. Several hikers referred to Maine as “our reward for what we endured on the rest of the trail.”

Did you receive any trail magic along the way? Can you describe anything?

Trail magic in the south was very common. There were stretches in Georgia, North Carolina, and Tennessee where we would receive trail magic for several days in a row, and even multiple times a day. Though it came in many forms, the most common was for someone to come to a road crossing and provide food, drinks, and small toiletry, first aid, and other gear items. These people usually enjoyed talking with hikers and were extremely kind and generous. It was also very common to find a cooler at the side of the road full of beer and Gatorade. Finding a cold drink on a hot, dry morning in August can turn your entire day around.

Other trail magic in the form of free rides, showers, laundry, etc. were not uncommon in town. Many people in trail towns know you’re a thru-hiker by the sight and smell of you, and many of them are eager to help or encourage you in any way they can. 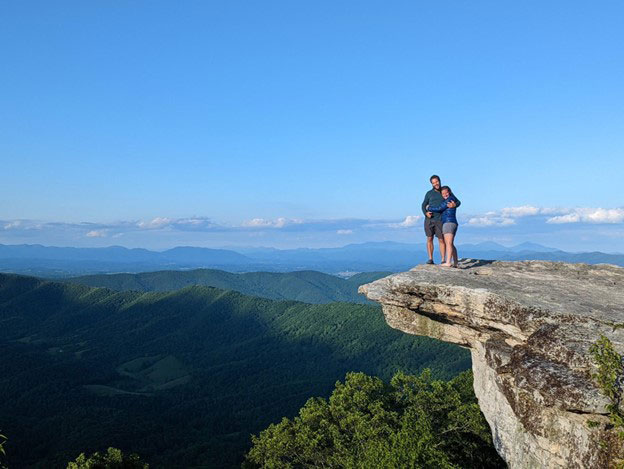 The proposed CMP corridor would cross over the AT in three locations. Do you remember hiking around these areas? Any thoughts on CMP putting the corridor through this area?

Large transmission lines are not uncommon in the south. One of the things we loved about Maine was the remote feeling, and the sense of nearly untouched beauty. If the CMP corridor crossed the AT, it would have the potential to be a significant detraction from those senses and would be a step toward making the Maine section a little less unique. Perhaps to future thru-hikers, the corridor would seem like a normal part of trail, since they would have crossed so many similar transmission lines in the south. To anyone revisiting those areas of the trail, it would be obvious what had been lost. 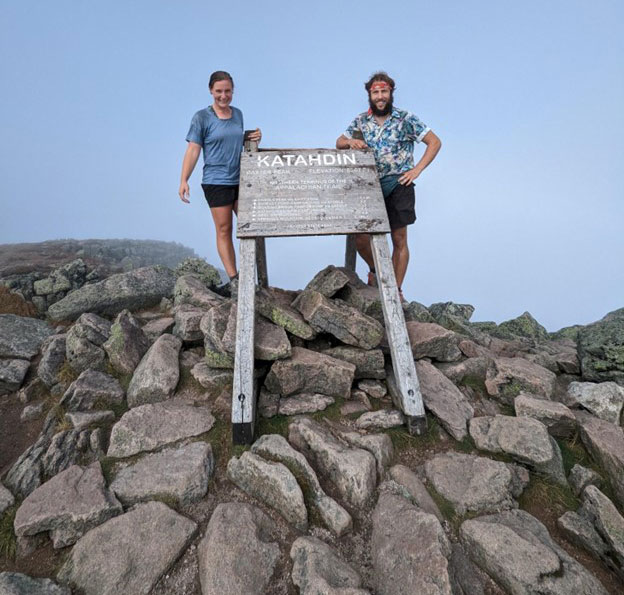 What advice would you give to anyone thinking of hiking the AT?

Give yourself time. Don’t rush your hike or you may find you were unable to enjoy many aspects of the trail that are unique to the thru-hiker lifestyle.

Don’t over plan or overprepare. Many things you learn on the trail are counterintuitive and must be learned from experience. Your hiking style will change with the section of trail you are in, and it will be different from the way you hike on short trips.

Would you hike the AT again?

We both say no. Though it was full of wonderful experiences, which we will miss, we know we wouldn’t be able to get those same feelings and experiences back by re-hiking the trail. There are other trails and other adventures that we would rather take if we have the opportunity to do something like this again.

The Appalachian Trail is a very unique and special thing.