Speaking Up for a New National Monument 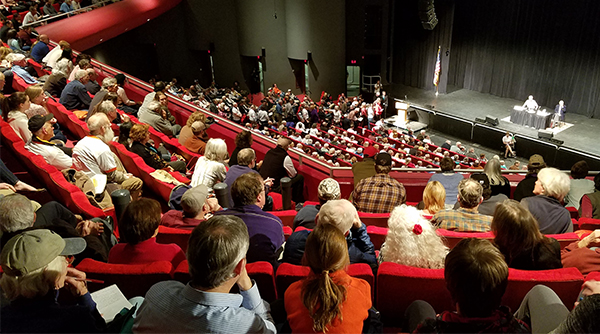 Some of the crowd at the May 16 National Monument meeting with Senator King and National Park Service Director Jarvis in Orono. Photo by E.Theberge/NRCM

On May 16, 2016, more than 1,100 supporters of new National Monument for Maine attended a hearing in Orono, hosted by Senator Angus King, who invited National Park Service Director Jonathan Jarvis to hear from Maine people about the proposal. The incredible turnout included people from every corner of the state. About 200 people came on buses, including several dozen supporters from Patten and Medway, and another 900+ came on their own. Such an overwhelming show of support confirms a poll showing that 67 percent of Maine people support a new National Park in northern Maine. Together we sent a strong message to Director Jarvis that Maine people are ready and excited for a new National Monument in our state. Thank you so much to all who made the effort to attend this very special, “monumental” meeting.

Below is my press statement from that day. I wanted to tell Director Jarvis why NRCM staff, board, and members support this tremendous opportunity, and why our staff has been working so hard to help make a Maine Woods National Monument a reality for the last few years.

“I’m Lisa Pohlmann, executive director for the Natural Resources Council of Maine and we are proud to support the national monument. We join many good friends from the Katahdin region who we’ve gotten to know very well over the past five years and who also support the monument. And we represent 16,000 members and supporters from every corner of Maine and beyond.

NRCM is the leading environmental advocacy group in the state, founded by Maine people in 1959 to safeguard our air, land, and water. Last Friday, we sent a letter to President Obama expressing our support for this new national monument, signed by 101 of our current and former board and national advisory board members. They live in 50 different towns across Maine. They are just like so many people in Maine who are thrilled to think that they could leave an economic and conservation legacy like this to their kids and grandkids.

We have studied the economic impacts of other national monuments across the country and know that this national monument will bring sorely needed economic benefits to the Katahdin region. It would also bring a resurgence of young people to an area where too many have had to leave. I know two young people who have recently moved to the Millinocket area. One grew up there and one moved because of her husband’s job. Both are getting involved in the town, are looking for business ideas, and are anxious to help the area grow again. Many, many more will follow them, because they already know—or will soon start to hear about—just how special this place is and the opportunities that are just around the corner.

NRCM staff, board, and members have hiked, camped, canoed, and skied on the proposed monument woods and waters. We know firsthand their incredible beauty, the habitat and wildlife they protect, and the many recreational opportunities they offer. We want to share this place with many others who will come, be renewed, and spend money in the process.

The proposed national monument is an incredibly generous gift to the people of the nation, the state of Maine and the Katahdin region. It’s the type of opportunity that only comes along once a century. We must seize it!

Thank you for coming to Maine, Director Jarvis. I hope we’ll be celebrating the President’s designation of this national monument with you very soon.”