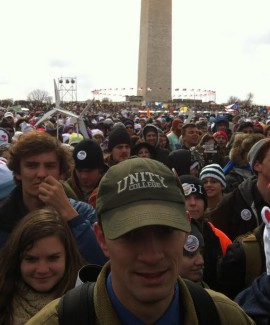 NRCM members joined more than 35,000 people in D.C. for the Forward on Climate rally.

When we announced to our members that NRCM would sponsor a bus to the Forward on Climate rally in Washington, D.C., it was filled within a week.

They joined more than 35,000 people from across the country last Sunday to send President Obama and members of Congress a strong message that we demand federal action on climate change now!

Those of you following the event on our Facebook and Twitter pages saw the NRCM busload carrying signs and banners, joining three other busloads from Maine and then tens of thousands of marchers from elsewhere on the National Mall. You read our tweets when writer-activist Bill McKibben stepped up to the podium to speak eloquently and passionately about the most urgent environmental issue of our time: global warming. NRCM’s outreach coordinator Emmie Theberge was live blogging while NRCM logistics guru Todd Martin was snapping photos, and so were many of you.

Our NRCM members went to D.C. to proudly represent the concerns we share here in Maine about the damaging economic and health impacts of climate change: the decline of our fishing industry from warming waters and ocean acidification; more Lyme disease for people and greater wildlife mortality from the proliferation of ticks; more flooding of seaside communities and wildlife habitat due to sea-level rise, and more severe ice, wind, fire and snow storms across the nation, like  last week’s “Nemo” blizzard or “Superstorm Sandy”, causing costly damage and loss of life. The vast majority of scientists agree that these storms can be tied to global warming.

We are heading toward the point of no return on climate change, but the clock has not run out yet. We need President Obama to act now. During his State of the Union address on February 12, 2013, he said, “For the sake of our children and our future, we must do more to combat climate change… if Congress won’t act soon to protect future generations, I will.” Shortly before that, in his inaugural speech on January 21, 2013, he announced, “We will respond to climate change, knowing that the failure to do so would betray our children and our future.”

NRCM outreach staff Emmie Theberge and Todd Martin at the rally in D.C.

We will insist he stand by his word, and we are calling on Congress to work with him to make sure they develop an action plan for the climate, and soon.

If you were on the NRCM bus for the climate rally, thank you. We appreciate you bringing our concerns directly to D.C.