An Afternoon to Honor Nathaniel Reed

Nathaniel Reed was a nationally known environmental champion who helped turn the Endangered Species Act into law and shepherded many other environmental laws while serving as an assistant secretary of the Department of Interior in the 1970s. He lived in and loved Florida, but also had a summer home in Winter Harbor and loved Maine as well. Nat served on the National Advisory Board of the Natural Resources Council of Maine for nearly 20 years and was a steadfast NRCM member.

Since taking the helm of NRCM eight years ago, I had the great honor of meeting with Nat most summers that he was in Maine. He frequently took me to lunch at the Winter Harbor Country Club. He introduced me to his neighbors, and we would talk over the latest national and Maine news. His great love of rivers and fishing was always part of the conversation, as he recounted stories from some recent or upcoming fishing expedition.

Nat was helpful to NRCM’s efforts on river restoration. As an example, he engaged the leadership at National Geographic, who used one of the mills on Maine’s Androscoggin River for their magazine stock. Eventually, the work we did with National Geographic resulted in that mill reducing its pollution discharges to the river dramatically.

Nat caught his final salmon on July 3, at age 84. Right after landing that 16-pounder, he slipped and fell and never recovered. I traveled to Florida on December 8th to join hundreds of people who came to his memorial service.

Before going to the service, I spent a warm afternoon up the road at the Hobe Sound National Wildlife Refuge and Nature Center, which the Florida Senate is currently considering renaming in Nat’s honor because of his tireless work to protect the nature of Florida (2022 note: the Refuge is now officially named the Nathaniel P. Reed Hobe Sound National Wildlife Refuge). I walked the loop trail through sand pine scrub habitat, which is Florida’s oldest and most endangered habitat. According to the nature center’s website, “It is home to many vanishing plant and animal species, including scrub jays, gopher tortoises, indigo snakes, four-petaled pawpaw, and dancing lady orchids.” In the spring, the center puts on nighttime “sea turtle walks” so that people can witness “the egg-laying of the threatened loggerhead sea turtle.” I took in these landscapes on trailside benches, waded in the Indian River Lagoon, imagined the turtles nearby, saw an Osprey soar overheard, and reflected upon the amazing contribution Nat made to sustaining wildlife and habitat and to ensuring that future generations will enjoy it.

The service was equally inspiring, with touching tributes from his children, grandchildren, and a dear friend. We sang some of his favorite hymns, and the minister noted that Nat would sing them in his deep, booming voice. Everyone’s love for this man was palpable. We celebrated his love for nature and nation by singing God Bless America at the end. 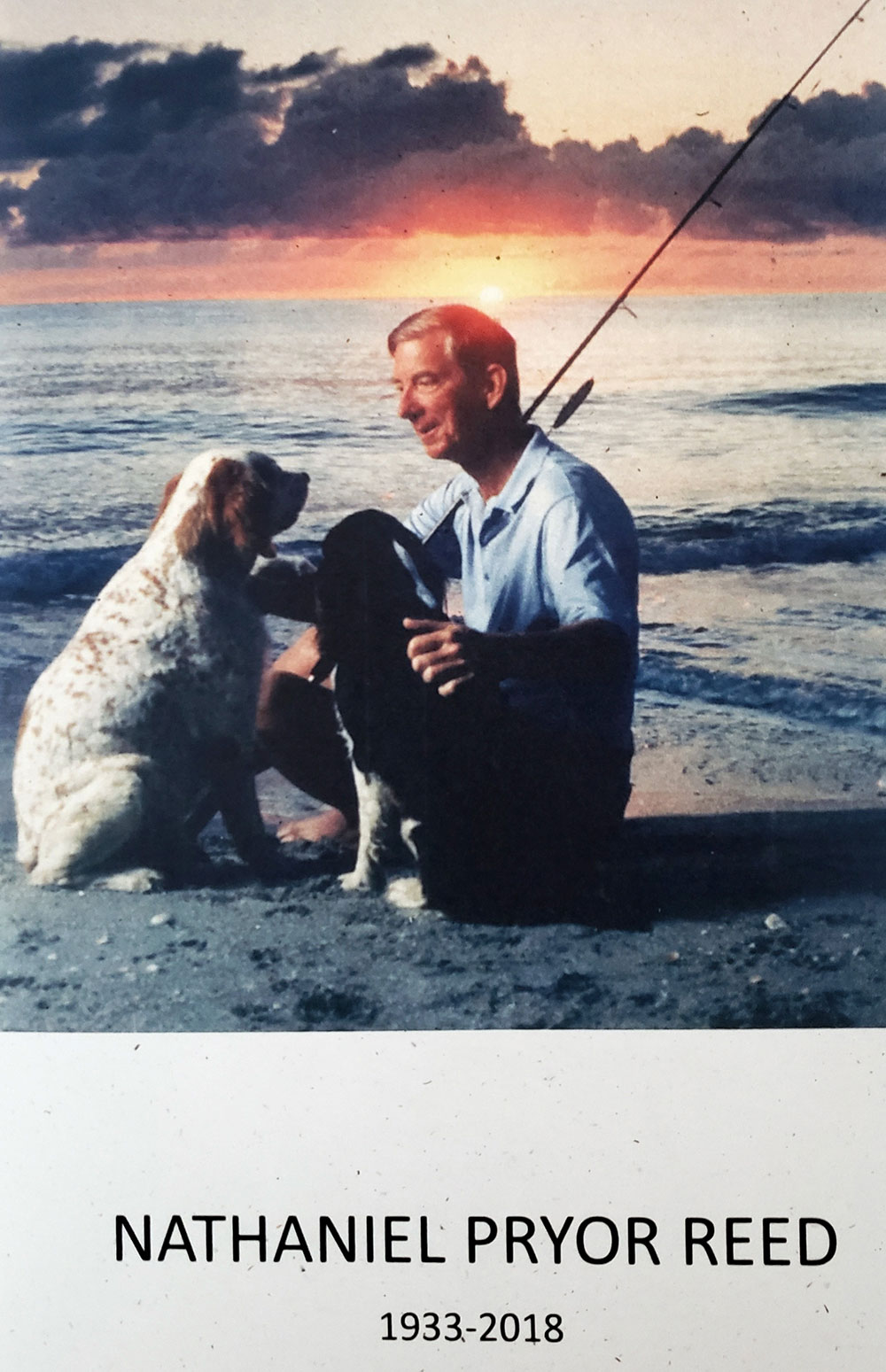 The cover of the program for Nathaniel Reed’s memorial service.

I return to my work in Maine, protecting our precious landscapes and waters, rejuvenated by Nat’s power, his actions, and his love. It is an honor to have known him, and an honor to follow in his giant footsteps.

The five years which I served as Assistant Secretary of the Department of Interior for Fish, Wildlife and National Parks was one of the most exciting and rewarding periods of my life. I worked in harmony with the most extraordinary women and men – all devoted to maximizing a moment in time when the American people demanded of their elected officials solutions to the blight of excessive sewage and industrial waste pollution. There was unanimity regarding the need to acquire rate habitats not only for endangered species but also for recreational and green space. It was “an era of opportunity.” A small group of women and men accepted the challenges and laid the foundation of national environmental law.

Excerpt from: Travels on the Green Highway: an Environmentalist’s Journey by Nathaniel Pryor Reed. 2016