Moving Away From Coal and Toward Solar and Wind 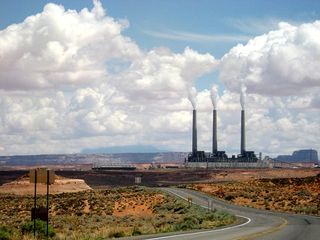 Although the coal, oil, and utility lobby spent $500 million over the past two years to defeat comprehensive climate and clean energy legislation, the shift to clean energy is underway and inevitable.  Two big developments toward clean energy are worth noting.

The New York Times reports that there is a growing movement in the Navajo Nation to shift away from coal-fired power plants and toward wind and solar power.  With two of the worst polluting coal-fired power plants in the nation, many Navajos are trying to end the environmental degradation caused by coal plants and coal mining on their lands.  Two coal mines on the reservation have been shut down in the last five years, and the EPA earlier this month announced that it may require the Four Corners Power Plant to install $717 million in emissions controls – which could force the plant to be closed.  The Navajo Green Economy Commission is looking into the possibility of a solar plant, perhaps located on land reclaimed from coal mining, and the wind resource is strong in the region.

And solar power took a big step forward this week, as the largest solar plant in the world has just been approved – a $6 billion California project that could provide enough electricity for 300,000 homes.   Construction could begin before the end of the year.  The clean energy transition will come in steps, and these steps are in the right direction.