Matagamon to Medway – Four Days on the East Branch of the Penobscot River: July 4-7, 2013

The East Branch of the Penobscot River is one of Maine’s best kept paddling secrets. The river descends through spectacular scenery in a remote region east of Baxter State Park with imposing waterfalls and demanding rapids, interspersed with flat stretches of prime wildlife habitat. Much of the land along the river is owned by Elliotsville Plantation, Inc., a private, Maine-based foundation that is proposing to donate the land (and a $40 million endowment) for a national park and national recreation area in Maine’s North Woods east of Baxter. The proposal would protect 150,000 acres—75,000 for the national park and 75,000 for the national recreation area—and would help ensure that this spectacular river remains undeveloped and accessible for generations to come. Last summer my partner and I spent four days on the river, and were rewarded with great wildlife sightings, superlative whitewater, impressive waterfalls, and gorgeous scenery. 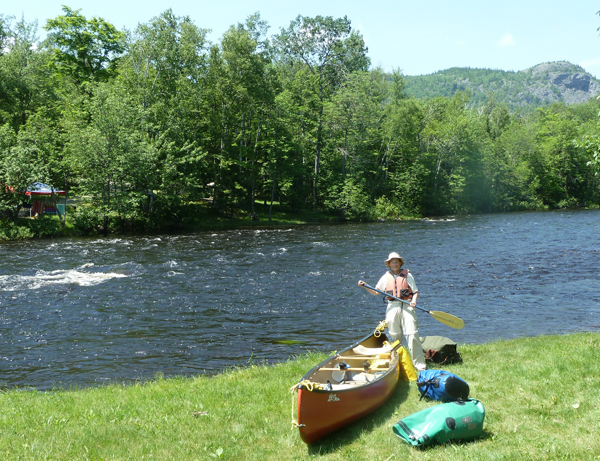 This is a photo of me at Matagamon Wilderness Camps, where we put in for our paddle.

We started at the Matagamon Wilderness Campground and Store, just downstream from the dam that creates Grand Lake Matagamon. Water levels were fairly high for this time of year, because of a very wet June.

The first stretch of river has good current, but no major rapids.  The big surprise was the close-up view of Baxter State Park’s dramatic northern mountains, including the Travelers, from the east side—rather than the familiar west side where the Park’s trails are located. Rocky cliffs on some of these mountains face the East Branch and were a useful orienting tool as the river twisted back on itself (and passed the campsite where Thoreau camped in 1857), causing me to continually check the location of the sun to figure out whether we were headed south or north!

Soon we came to the first significant rapids, Stair Falls, a series of ledges crossing the river like a big staircase, broken up just enough in the middle to allow a slot for canoes. We stopped and scouted, then scooted through with no problem, though the standing waves were large. Different water levels can lead to more or less difficulty on these rapids, but paddlers with some whitewater experience should be fine.

Shortly thereafter we entered Haskell Deadwater, a flat, pond-like stretch of river with marshy areas off both sides, where we spent our first night.  It was very hot so we took a swim at the gravel beach near the campsite, then settled in for some serious relaxing. A half hour later, I got up to inspect a nearby flower and a  Bald Eagle took off out of the short tree directly over our heads, a spectacular close view of America’s national bird.

We ate dinner early, so we could spent the hour or two before dark in the canoe exploring the nooks and crannies of the Deadwater.  In one marshy area, a beautiful doe leaped up out of the grass near our canoe and bounded through the marsh to dry land, its tawny coat and white tail flashing in the evening sun.

In another area we discovered a beaver lodge with a “mother-in-law” apartment (an “el”) attached.  Two slap-happy beavers circled our canoe repeatedly, making it clear who owned that section of the Deadwater! We paddled off, but not far away a different pair of beavers continued the warning racket. Clearly they were the sentinels for the entire area. We watched the sun sink behind the Traveler Mountains and headed for shore and our sleeping bags. 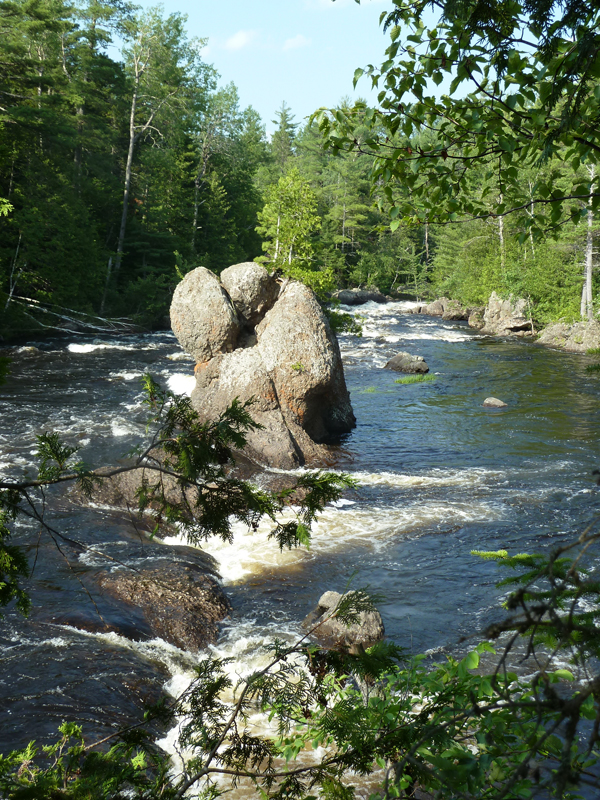 Haskell Rock on the East Branch of the Penobscot River

The next morning we packed up and headed for the first of the day’s four portages, Haskell Rock Pitch. The name “Pitch” is misleading as the rapid is clearly unrunnable in an open canoe and bigger than other drops christened “waterfalls.”  A rocky column mid-stream (“Haskell Rock”) is adorned with some trees and the water pummeled through the rocks, around a bend and out of sight.  We loaded up our gear (one pack on my front, another on my back, the canoe on my partner’s head) and headed down the ½ mile portage trail with excellent views of the falls. We left our gear and the canoe at the end of the trail and wandered back to retrieve the remaining gear and take pictures of the rocks, falls, twists, and turns of the river.

Back at the bottom of the portage trail the second time, we reloaded the canoe and carefully tied everything in, knowing that there was serious, but runnable, white water below. While the stretch of the river from Matagamon to Haskell Deadwater is suitable for paddlers with limited whitewater experience, today’s stretch from Haskell Rock Pitch to Bowlin Camps is for experienced whitewater paddlers only.

And a prime piece of whitewater it is, with rocks to avoid and waves to ride out (preferably without swamping!)  Part of the challenge is that there is no flat section below in which to recover should you tip over. There was the latent worry of getting swept into the next unrunnable rapid.

In addition to beautiful runnable rapids, the day included three more “pitches” that needed to be portaged, each with a ½ mile trail around spectacular falls, rocks, and drops.  The biggest, Grand Pitch, is unquestionably a waterfall, but, as Thoreau wrote after he paddled this stretch: “We had heard of a Grand Falls on this stream, and thought that each fall we came to must be it, but after christening several in succession with this name, we gave up the search.  There were more Grand or Petty Falls than I can remember.”

One of the glories of this river is its feeling of remoteness. The last of the big four “pitches” (the Hulling Machine) is hard to see, from the portage trail.  After portaging our canoe and gear below the pitch, we paddled across the river and bushwhacked up the other side for a look at the Hulling Machine—and understood the meaning of its name.

At the end of a full day we concluded that we had paddled about four river miles and walked about eight portage miles! 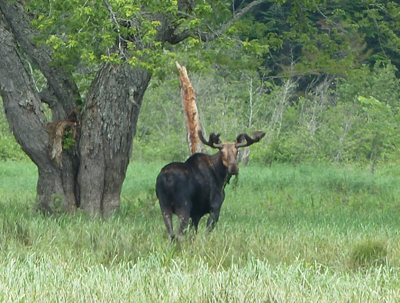 Here is one of the moose that we saw on our trip.

Day three was an entirely different experience. Between Bowlin Camps and Whetstone Falls there are no significant rapids.  Paddlers of any skill level can paddle from Bowlin to Lunksoos camps where there is a publicly available boat launch. Most of the way, there is good current and many marshy bogans for possible views of moose and birds.

This stretch of the river is notable for its potential for wildlife and interesting plant sightings. Much of the shore is an ecologically significant silver maple floodplain forest. The river twists and turns among the maple trees, and there are numerous oxbows, side channels, and back channels to explore. We paddled into these marshy areas and spotted Bald Eagles, interesting plants, and a regal bull moose. The only frustrating thing was that there were so many inlets and side channels to explore that we didn’t have time to go into them all! The Sebois River (also a great paddling trip) joins the East Branch, and a few miles below, Wassataquoik Stream, flowing out of the heart of Baxter State Park, joins the river.

We spent our last night at a beautifully situated campsite just above Whetstone Falls, out of sight of the logging road bridge below.  There are rocky, water-carved ledges sticking out into the river and a small beach; we swam, relaxed, and cooked dinner on the breezy, mercifully bug-free ledges. Several canoes passed by, heading down Upper Whetstone Falls rapids; one stuck on a rock and tipped its paddlers into the river, a reminder to choose the section of this river that matches one’s paddling abilities.

Toward evening we spotted a cow moose with a young calf, upstream from our ledge in a side channel.  The cow grazed in the water for an hour and the young calf swam out from the shore, around its mother, and back to shore. Eventually they disappeared into the woods, but just before dark they reappeared and swam across the river just upstream, the calf dutifully following its mom. How they can swim against the strong current with such skinny legs is a miracle! 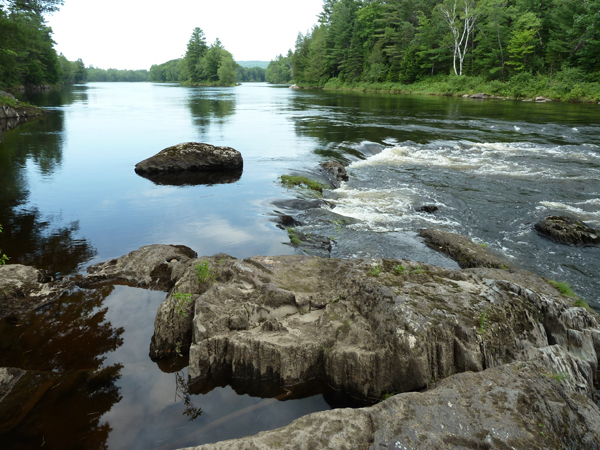 This is the ledge at the campsite above Whetstone Falls where we saw a moose and her calf crossing the river.

Our final morning we loaded the canoe, tied down our gear, and headed into Whetstone Falls. Despite its name, Whetstone Falls is runnable at most water levels. There are two pitches, separated by a pool.  A gravel woods road crosses the river above the second pitch (the first vehicle bridge since we put in at Matagamon four days earlier), and we scouted this drop from the bridge. We picked our route through big waves between bridge piers and passed through with no problems.

Below Whetstone, the river flattens out, and it is a lazy paddle for miles.  Once again we saw many Bald Eagles and enjoyed the leisurely float.  The road from Medway to Stacyville joins the river at Hay Brook village and there are a number of camps and homes along the river, the first we had seen on the river. (We had passed two sporting camps, Bowlin and Lunksoos, but otherwise the river above Hay Brook is completely undeveloped.)

At Grindstone Falls there is a state picnic area on the river. We ran into a group of young teenaged girls from Camp Wavus, deservedly proud that they had successfully (all except one!) paddled Whetstone Falls.  Together we gasped at the unexpected length and difficulty of the rapids at Grindstone and debated whether to run them.

After lengthy scouting, we decided to try; the Wavus girls lined the shore and cheered as we successfully dropped over the first significant drop. The rapids, white and furious, continued for ¾ of a mile—some of the most challenging and strenuous of the trip.  The waves were big, the current very strong, there were plenty of rocks, and no clear routes.  Part way down we passed a capsized canoe pinned to a rock, abandoned by unfortunate paddlers, days or weeks earlier. We took on several gallons of water as we made our way through high standing waves and pulled over to bail.

But it was a hot day, the splashing over the gunnels felt good, and we were pleased to arrive at the bottom still upright.  We stopped for lunch on a ledge with an upriver view of the continuous whitewater.  Using good judgment, the Wavus Camp girls never appeared and must have decided to end their trip above the rapids.

Paddling on, we passed over Ledge Falls, a tricky, winding drop. The river flattened, broadened, and meandered into Medway. There were islands in the river, and people in kayaks and swimming at the Medway beach, where we ended our trip.

We reflected on a great trip, with so much variety in scenery and experiences, with mountain views, wildlife sightings, waterfalls, and marshes. It is both a national and a local treasure; a major canoe trip through remote, historic wildlands is a great way to take it all in.

If you decide to see this area for yourself, get a copy of the recently published Thoreau-Wabanaki Trail map and guide, with a beautiful map on one side and mile-by-mile description on the other (produced by Maine Woods Forever, published by the University of Maine Press). One of the beauties of this river is that it is runnable most of the summer, in most years, because the dam ensures that that there is a constant flow of water.  Proceed cautiously and scout the rapids when in doubt.

All photos in this post were taken by Jon Luoma

List of local accommodation and restaurants for your visit