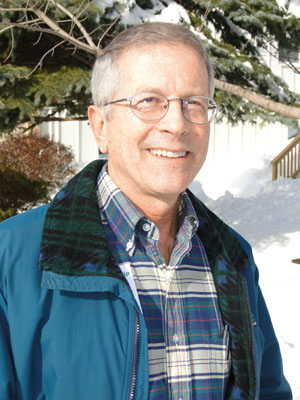 1. What made you decide to get involved in environmental advocacy? Was there one issue in particular that got you involved?

It started with the Arab Oil Embargo of 1973. I was a 25-year-old officer in the US Air Force, driving a Corvette and Buick [both getting 15 mpg]. The fuel shortages led me to study the impact of oil consumption on the environment, foreign policy, relations with the Middle East, and wars; and I sold both gas-hogs in 1973 and bought two VW’s getting 30mpg. I eventually became aware of Climate Change in the mid-1980’s; and this led to intensification of my effort to reduce fossil fuel consumption overall. From these issues, I became aware of many additional issues; and realized that our long-term survival and the incredible natural beauty and inter-connected web of life depended on changes in the human direction and activity.

2. What actions have you taken to help protect Maine ’s environment?

The first was joining NRCM 30 minutes after moving to Maine in 1993. Ayup, that’s no typo. I crossed the NH border and stopped at LL Bean’s, where a table was set up for a NRCM membership drive. I joined on the spot. I have been a regular financial supportor since, attend Citizen Action Day nearly every year, have discussed various issues and specific bills with legislators over the years, served as a local team leader for advocates and a phone tree, and I practice environmentally sound activities as much as possible [carpooling, driving high efficiency vehicles, bicycling, walking for errands, maximizing energy efficiency of my homes, etc.]. I am a member of the Belfast Energy & Climate Committee [reduce energy consumption and greenhouse gas emissions of the town and its citizens], the Belfast Recycling Committee, the Coop Recycling Committee, and the Belfast Comprehensive Planning Committee [where I emphasize planning that minimizes energy usage and greenhouse gas emissions].

3. Why are environmental issues of concern to you?

Our children and all other natural beings on the planet make many issues of concern to me. It is clear that we are on a path of destruction, call it environmental armageddon, from so many directions [climate change, pollution, nuclear war leading to nuclear winter, over-population, over-consumption, habitat destruction, etc.] And the patchwork approach is not going to save us. There has to be a paradigm shift in attitude.

4. Why did you choose to become involved with the Natural Resources Council of Maine in particular? Are you involved with other environmental groups in Maine as well?

Before moving to Maine, I had been [and still am] a member of The Nature Conservancy, Environmental Defense Fund, Natural Resources Defense Council, Sierra Club, League of Conservation Voters, and others, for over two decades. When I saw the mission of NRCM, it was a natural. How could I not support this amazing organization that has accomplished so much?

5. Can you tell us a little bit about your experiences attending Citizen Action Day at NRCM? What piece(s) of the day do you find most valuable?

At first it was anxiety-producing as I worried about saying the correct thing, and felt bad about taking up the time of busy legislators. Each year, it gets easier and I have shifted my attitude to one of, “The environment, the people of Maine, and I deserve the attention of our legislators; and they owe us the consideration that is deserved.” The most valuable parts of the day, besides having some influence over my legislators, are the association with the staff and other advocates; and the great breakfast and lunch are like “icing on the cake.”

6. What advice do you have for people who are considering becoming environmental activists in Maine?

DO IT! Our lives and those of our children and fellow creatures on this small planet depend on it. Like so many major issues before [racial equality, the V.N. war, women’s suffrage, etc.], it is the sheer number of people that organize and push for change that makes the difference. Also, look at the big picture, while avoiding getting overly focused on one small environmental issue. And a final recommendation: work with NRCM, as this organization has its finger on the pulse of what matters, and will coordinate and advise what actions are most helpful at a given point in time. Citizen Action Day is a good example.