Higher Education in the Environmental Century

“….what we’re doing today with greenhouse gas emissions — which is just a moment when you look at the geophysical timescales — has consequences for decades, centuries, millennia.” —Ricarda Winkelmann, Climate Scientist, Potsdam Institute, 2016 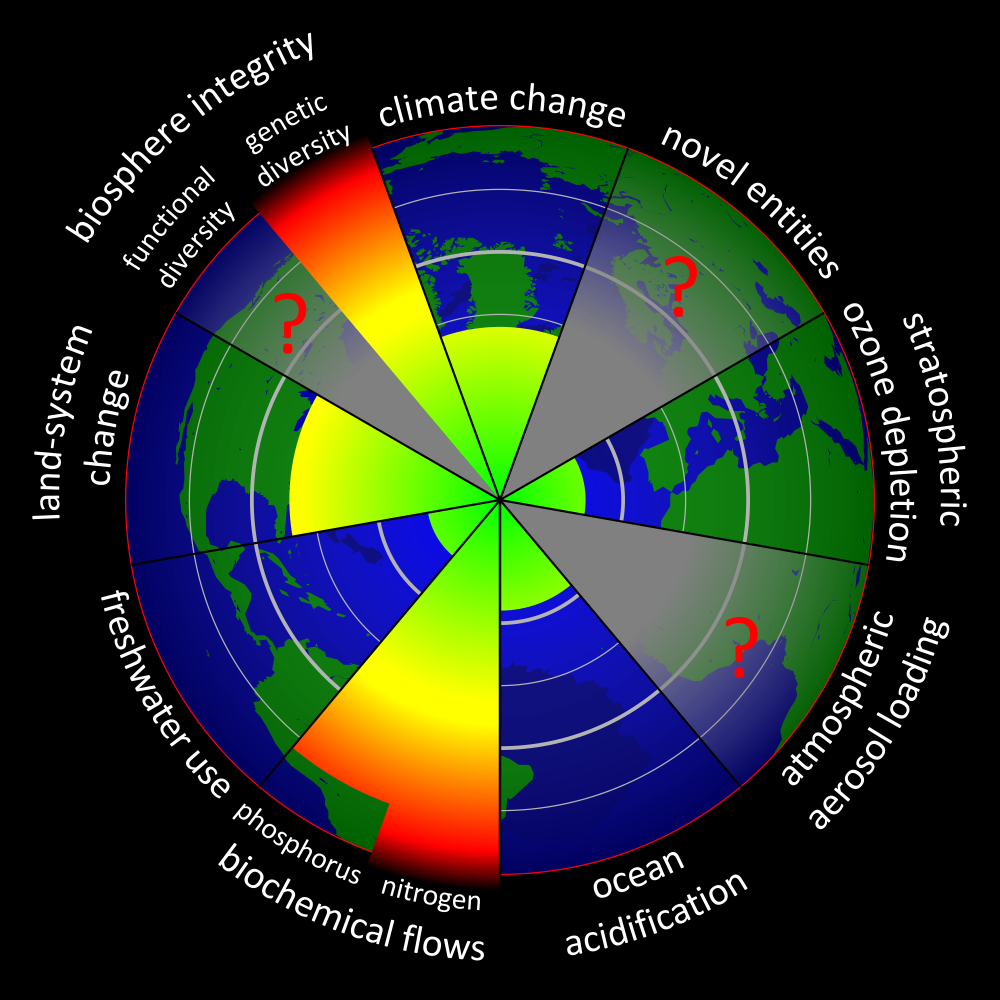 Two overarching imperatives have come together to provide the framework for my lifework. The first of these is the long emergency driven by the existential threats of climate change and biosphere transformation. As a scientist, I have felt compelled to make my academic life relevant to these threats, which are illustrated above as safety margins for human activities. My research on the ecology of tropical forests has been meaningful in this context, but in early 2000, I became increasingly aware that higher education is broadly failing to prepare generations of students to face the unfolding crises of the environmental century. Thus, the second imperative is the need to transform higher education to provide students and professionals with the understanding to respond to profound disruptions of our biosphere and civilization. This represents a new paradigm of relevance for higher education, and increasingly students are asking how they can be a part of a meaningful response to these challenges.

Over the last decade or so, the sustainability movement in higher education has grown out of recognition by academic leaders of the foundational role that colleges and universities must play in building a sustainable civilization. The premier organizations for this effort in the US are the Association for the Advancement of Sustainability in Higher Education (AASHE), which provides an institutional sustainability rating known as STARS, and Second Nature, which provides the framework for institutional Climate Leadership Commitments. These organizations have been focused mostly on operational sustainability, rather than curriculum or student outcomes. Because of the cost savings, administrations and boards of trustees are often quite willing to address issues related to energy use, building design, waste minimization, and recycling. Addressing these issues is often a point of institutional pride, and schools are ranked annually by popular reviews such as Princeton Green Schools and Sierra magazine.

Walking the talk is essential, but the mission of higher education is not operational sustainability. It is teaching, learning, outreach, and research. With notable exceptions such as the Arizona State University degree tracks in sustainability, relatively few institutions have developed integrative programming for sustainability education and research. Because we must now broadly reconfigure our economy and use of natural resources, the principles of sustainability and the science of how climate change will affect life on Earth must be integrated throughout all aspects of university curriculum.

Unity College in Unity, Maine, has been a leader in these efforts. In November 2012 Unity College became the first college in the nation to divest its then $15.5 million endowment from the top 200 fossil fuel companies, as recommend by Carbon Tracker. The board of trustees gave its unanimous endorsement for this historic decision. Although an important step, as the president I viewed a decision made earlier that year considerably more meaningful in terms of shaping the future of the College and its students. Both the board and the faculty gave their unanimous endorsement to adopt the US National Academy’s concept of sustainability science as the framework for all of Unity’s academic programming. Built on a solid commitment to the humanities and liberal arts, this allowed the faculty to integrate climate change into all aspects of the curriculum. The current president, Dr. Peter Melik Khoury, is proceeding with the development of the curriculum in sustainability with the opening of the College’s graduate program in sustainability science starting in the fall of 2016.

At most universities, environmental and sustainability programming is commonly funded and staffed on the marginal availability of resources from regularly budgeted units. Thus, these programs are most vulnerable to budget cuts during lean times. The vast majority of these interdisciplinary programs lack administrative autonomy and sufficient resources to have status equivalent to established colleges and departments within the university. As my colleagues and I have documented (2015, 2014), traditional institutional organization does not adequately support interdisciplinary and transdisciplinary education and research. Data from the Center for Environmental Education Research of the National Council for Science and the Environment show that this structural problem is widespread.

A strong force directing the future of higher education is the growing awareness among faculty and students that the academy has an ethical obligation to be the foundation of a sustainable civilization. The faculty has generally been at the forefront of bringing to students the intellectual engagement with sustainability and climate change science. Scholars in the social sciences are especially aware of the impact of global change on their disciplines. Research on Earth systems responses to global warming is one of the top priorities for NSF, NOAA, and other funding agencies.

Although there has been progress, and the number of programs in sustainability science have rapidly grown, many academics fail to grasp the foundational importance of sustainability and climate change for their work as scholars and educators. I have found a lack of engagement with these issues among tenured, old guard faculty who typically hold the political power within faculty bodies of governance. There is a misplaced egalitarian and postmodern claim that these issues are competing areas of study and should not be seen as central to the entire curriculum. I disagree. The overarching existential challenges of this century will come to frame and define what we do in the academy, regardless of our willingness to recognize their centrality.

A greater concern is that the conventional model of higher education is in crisis. Facing the financial challenges of recent decades, leadership has struggled to deal with an outdated and inappropriate funding model. Without substantial financing from the public sector, there seems to be no sustainable long-term business model for public higher education. Well-intentioned administrations and governing boards are often unwilling or unable to provide leadership for transformation in the face of the expectations of entrenched constituencies. Seeking to shore up market share, many institutions have become inappropriately focused on vocational outcomes rather than developing thoughtful, effective citizens. Simply put, higher education’s role in the maintenance and renewal of civilization must be underwritten as a public good.

Notwithstanding the concerns reviewed here, it is clear that many institutions of higher learning are to varying extents embracing progressive reform. I am hopeful that as the impacts of ongoing planetary disruption unfold, this reform will hasten, and institutions will focus on the ethical obligation to students and society. Viewed from an international perspective, there is evidence that such a transition is underway. Scholars of sustainability science are recognizing that a data-based foundational respect for the limits of the biosphere is key to the survival of civilization. Higher education has a central role to play as we test the hypothesis inherent in our Latin binomial, Homo sapiens. Are we indeed wise humans?