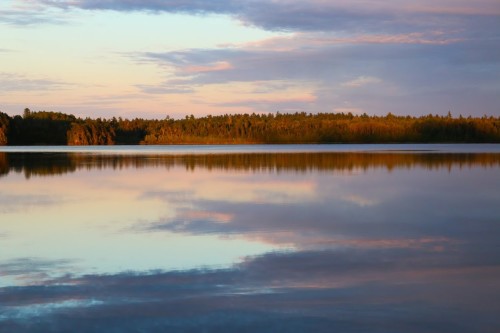 Third Lake was breathtakingly beautiful. We pushed off into the inlet, and after only a minute or two of paddling turned the corner to see the lake view unfold in front of us.

Unlike Fourth Lake, I couldn’t see the bottom of Third Lake. Much of its banks were rocky, or rose as huge boulders. Like much of the North Woods during our trip, the trees were still green, with only a few color pops here and there. Blue-purple mountains sat silently in the distance on multiple sides, and loon calls reverberated across the water. We had it all to ourselves.

First things first: set up a campsite. Joe had told us of a promising location he knew of on a point near the inlet, and we paddled straight for it, pulling our canoe up on a pebbly beach. The campsite was made up of two clearings, one grassy where we quickly put up our tent and lay down our sleeping bags, and another with a rock fire pit used for cooking meals. Maine has Black Bears, and even though they are generally shy I was glad to have a separation between our food and our sleeping space.

It was already mid-afternoon by the time our things were in order, and we took our fly-rods and jumped back in the canoe to make the most of every daylight minute. It had been cloudy for most of the day, but as we paddled bits and pieces of the sky began to show. One log cabin stood on a small hill overlooking the lake, but other than that the only signs of people we saw were the float planes that periodically passed overhead. 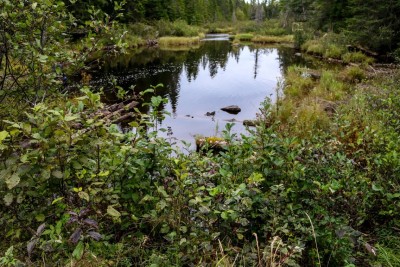 We fished as we paddled, but had no luck rousing anything. Still we continued to try, and at our slow pace it took forty five minutes for us to make it to the outlet end of the lake. It was there, where the lake began to narrow into a river once more, that we saw our first Common Loon of the trip.

Loons are an iconic Maine species, and occur in only the most northern states during the summer breeding season. I always have and probably always will associate Maine lakes with their haunting calls.

Eventually Brian’s frustration at not catching a fish moved us farther down the outlet until the lake had really become a river once more. Brian caught a hand-sized Chub on a dry fly, but we were after another iconic species, the Eastern Brook Trout.

Brook Trout are freshwater fish that need water of a certain temperature in order to survive and thrive. They are actually not “trout” at all, but a “charr” species. Because of their need for cold water and sensitivity to acidity and other pollution, Brook Trout have declined in areas with runoff issues and might be at risk in the future across their range due to climate change. In fact, the Eastern Brook Trout Joint Venture estimates that they have been lost in 90% of their range. To us, finding healthy Brook Trout was a sign that the river ecosystem was healthy too.

Paddling until a raised mound of stones—the remnants of an old walkway, we supposed – made continuing impossible, we pulled the canoe up to the edge and got out. Brian went to cast again and almost immediately came up with another hand-sized fish—a Brook Trout!

Buoyed by his success, Brian made towards a deeper pool below the raised line of rocks, and I studied a small cluster of minnows in the shallow water. Taking out my GoPro, I switched it on and gently set it beneath the surface, watching with delight as the tiny fish immediately swarmed the lens. 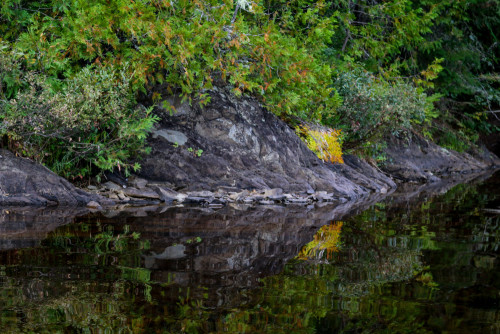 “Erika, ERIKA,” Brian suddenly called, snapping me out of my minnow manipulations.

I snatched up my regular camera and ran up a small embankment so I could see him, his rod bent with a bigger fish. He played it swiftly and deftly, letting the thirteen inch fish tug a few times before reeling him all the way in.

It was a male all right, in full fall breeding colors. He could have been a sunset with his bright orange belly, his green back speckled with multicolored dots. I have never seen such amazing colors on a freshwater fish.

His colors reminded us that the sun had almost set on us too, and we paddled back to our campsite. As we made dinner I kept taking quick jaunts to the water, drawn by the golden light of the evening and then the pink of the sunset bouncing off the remaining wisps of clouds. The water was calm, completing the picture with a brilliant sky reflection.

That’s the thing about camping though: when the daylight is done, you’re done. We sat around the fire for a little while and enjoyed the full moon, but the temperature was rapidly dropping. I pulled on about five layers, curled up in my sleeping bag, and fell into a deep sleep before 8 p.m.