The Katahdin Woods and Waters National Monument, Climate Change, and the Public Trust

by Stephen Mulkey, PhD, for The Natural Resources Council of Maine 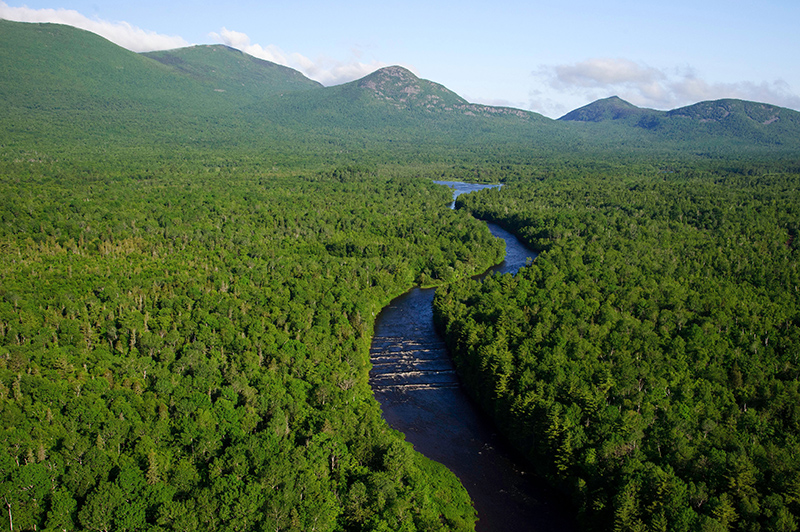 On Wednesday, 24 August 2016, President Obama designated a large parcel of Maine’s North Woods as the nation’s newest federal parkland. Many environmental groups and environmentally inclined citizens have worked diligently for several years to create the Katahdin Woods and Waters National Monument. These 87,500 acres were donated by Roxanne Quimby, a founder of the Burt’s Bees product line. The gift included a promised contribution of $40 million to support operations of the park. A gift of this magnitude is in the finest tradition of grand philanthropic giving to the National Park Service and is a much-needed boost to the chronically depressed economy of Maine. Although the benefits of preserving this area are manifold in the near to immediate term, I submit that the greatest value will be its ongoing contribution to our ability to respond to climate change.

Large, contiguous tracts of forested land significantly expand our options for management of carbon and species. If you connect the creation of this park with the notion of combating climate change, you likely assume that the trees and other living green things in the Maine woods will help mitigate climate change by removing CO2 from the air. While this would be correct, the potential for mitigation of climate change provided by the new national monument can only be realized through large-scale ecosystem management. We rely on forests for vital ecosystem services, but these are subject to disruption as climate change progresses. As we face up to 11˚F of average global warming by 2100, it is arguable that the most important services provided by intact ecosystems are climate regulation and the maintenance of biodiversity. Large-scale management to preserve these services will require ecologists to consider the interconnected web of organisms that determine the form and function of ecosystems.

Fragmented patches do not offer management options at economies of scale that can significantly maximize carbon uptake and minimize biogenic carbon emissions. Small plots of forest are far more vulnerable to ecological disruption from disease, insect outbreaks, fires caused by humans, catastrophic weather, and other disturbances. The ability of forests to sequester carbon may be particularly susceptible to fragmentation because of mycorrhizae, which form a vast underground network of fungi that connect the roots of different species of trees. This system moves water, mineral nutrients, and most importantly, carbon in the form of carbohydrates among members of the interconnected web. Thus, recovery from a fire or extreme weather event in one section of a large tract can be facilitated through the transfer of resources among interconnected trees. Through this mechanism, management of one part of the forest has the potential to benefit the other parts.

Maintenance of biodiversity will depend utterly on protecting large chunks of habitat and managing the connectedness of habitats across regions as shifting climate zones drive animals and plants into a new geography. As much as 37 percent of endemic or near-endemic species worldwide are likely to be threatened with extinction by climate change by 2050. A 2014 review in Science shows that rates of extinction will soon be on a scale not seen since the extinction of the dinosaurs, 66 million years ago. As horrible as this is, the emergent impact will be worse because of the interdependent nature of species that make up ecosystems. Assessing the loss of a species without considering its connections within its ecosystem is like cutting off a finger and expecting the hand to function as it had before, but merely with fewer digits. The human hand is an integrated system relying on the coordination of all parts. Similarly, the movements of energy and materials through an ecosystem such as a forest are variously dependent on the web of relationships among the species that make up the ecosystem.

The connectedness of the landscape in Maine’s North Woods is arguably more critical than in other parts of North America. Given the projected speed and extent of climate change in this region, there may not be enough climate variation across even a large tract to allow species to track their current climates. Assisted migration will be necessary for the survival of possibly many species of plants and animals. Thus, a significant tract of an intact forest will offer managers multiple locations where they can create conditions favorable for establishment of transplanted species. Assisted migration is not a simple or quick process. It will require decades of management of the landscape and development of the milieu of species and their relations in a climate zone. It should be evident that the success of this strategy depends on significantly slowing the pace of climate change.

Creation of the Katahdin Woods and Waters National Monument is a classic example of government acting according to the ancient doctrine of the public trust. As demonstrated by Garrett Hardin in his 1968 classic Science paper, The Tragedy of the Commons, unrestricted use of the resources of a commons will inevitably result in market failure. Resources necessary for the common good, such as clean air, abundant freshwater, and large tracts of intact forest, cannot be conserved through the collective effect of Adam Smith’s invisible hand of rational actors in the marketplace. Instead, resources that are necessary for the wellbeing of all, often cannot, and arguably should not, be privatized and must be held in trust for the public. The doctrine of the public trust dates from Roman times and is a foundation of all democratic forms of government. The public trust doctrine holds that “certain natural and cultural resources are preserved for public use, and that the government owns and must protect and maintain these resources” for the good of all.

The execution of environmental law through the doctrine of the public trust has failed to protect aspects of the global commons such as the atmosphere, freshwater, the oceans, and the cryosphere. Laws that were designed in the mid-twentieth century to mitigate the loss of species and control the pollution of air and water are woefully inadequate in the face of accelerating disruption of the biosphere. The vast majority of environmental regulations merely regulate the degree of destruction that can occur in a limited, legally defined part of the biosphere.

Let me say that again: Most environmental laws regulate environmental destruction; they rarely preserve anything. Such thinking does not assume that resources of the global commons can only be effectively managed in their entirety. The effect of the industrial revolution on climate began 180 years ago, and the impact of emissions has been cumulative. Twentieth-century anti-pollution laws, such as the Clean Air Act, were not intended to address the cumulative and pervasive nature of climate disruption caused by greenhouse gasses.

The doctrine of the public trust has far-reaching implications in the context of climate change. If we consider the physics of global warming, we must accept the reality that carbon pollution created by a Southern Company coal-fired power plant in Georgia will affect the wellbeing of all humans living on the Marshall Islands in the Pacific. Furthermore, application of this doctrine to the preservation of the biosphere is meaningless without recognizing the impact of climate change on the interconnections of the web of life. We cannot argue for the legal protection of individual species while neglecting the impact of climate change on the ecosystems of which they are an integral part. No species exists in isolation, and the loss of any species can have manifold impacts on the form and function of its ecosystem, which is itself transforming under a changing climate. In the era of global disruption of our life support systems, the public trust must now be defined holistically. Such an expansion of the public trust doctrine to recognize the reality of the interdependence of all living things has been described as Nature’s Trust and given a definition by the legal scholar Mary Christina Wood.

Implementing the ancient doctrine of the public trust has always been the proper role of government. Given the horrific depredations of unrestrained capitalism on natural resources, it should be clear that the unregulated market cannot provide any meaningful protection of the global commons. Although putting a price on carbon will provide market leverage to regulate emissions, ultimately governments must monitor and control the burning of fossil fuels on a global scale. Equally important, governments must extend their reach to control and manage the carbon resources of the biosphere over vast stretches of jurisdiction. If civilization is to survive, we must engage in comprehensive and intensive carbon management. In many cases, this will pit the doctrine of the public trust against private property rights. Unfortunately, piecemeal permitting of environmental destruction has been the operational norm for the legal application of the public trust. Legal interpretations of this doctrine are typically mired in bureaucratic wrangling over degrees of damage, liability, and responsibility for remediation.

Despite the history of misuse and lack of holistic application of the doctrine, the good news is that it remains alive and well. President Obama has exercised his authority under the Antiquities Act of 1906 to create 23 new monuments, more than any other president. He included a significant expansion of the marine preserve near Hawaii. Although his political opponents may not approve, such sweeping action demonstrates that application of the public trust doctrine is an accepted part of the fiduciary responsibility of government. I am hopeful that facing the global collapse of our life support systems will be a unifying crisis for our species. Establishment of a new holistic doctrine of nature’s trust will go far to transform our relationship with the Earth. Moving to this new legal interpretation will require courage and dedication to a higher purpose from our leaders. The recent establishment of the Katahdin Woods and Waters National Monument is a step in the right direction. Because our current path will lead to collapse, we must demand that our elected officials act unflinchingly in managing the global commons for the good of current and future generations.