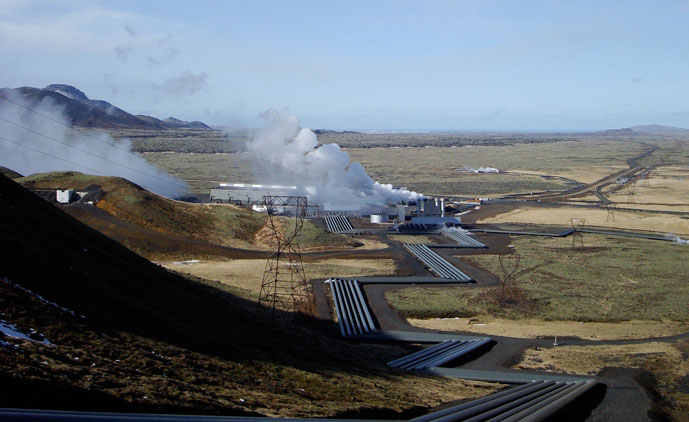 This week the mainstream media and many of the social media outlets have hailed the experiment in Iceland that has demonstrated the ability to capture CO2 from the air and turn it into rock. The Guardian proclaimed “CO2 turned into stone in Iceland in climate change breakthrough” and the journal Science headlined “Inject baby, inject!”. A similar, highly engineered coal-fired power plant operating in Canada has struggled to show cost effectiveness. Science saluted the technology in Iceland as a breakthrough that if scaled up could rapidly sequester large quantities of climate-warming CO2.

Unfortunately, bringing such technology to sufficient scale to provide even a marginal reduction in CO2 emissions from power plants worldwide is not likely within a timeframe that would help the planet stay below the Paris temperature targets. Such big technology fixes are characteristic of the approach that public- and investor-owned utilities apply to climate change. Large-scale engineering solutions are what these companies know how to do. Such projects reap big financial rewards in the short term for the project developers and their investors, but their value for cutting emissions is dubious.

The recent proposal to build a gas-fired cogeneration plant in Rockland, Maine, is an example of this kind of thinking. The idea of using fracked natural gas on such a large scale in this small coastal community, which lacks any large industry, is simply vacuous. So far Rockland has rejected this project, but one of the world’s largest biomass-fired plants was recently built by the same company in Gainesville, Florida. This plant has been a financial disaster for the city, and it has damaged local investment in solar energy. Both of these plants are far bigger than needed to meet demand and, more importantly, as designed, they are inappropriate solutions to the problem of emissions reduction.

Carbon capture and sequestration has been around for about 3.4 billion years. We call it photosynthesis and it is the carbon source for life on Earth. Proper management of biosphere resources to reduce natural and semi-natural sources of emissions incudes efforts to maximize carbon uptake by the Earth’s photosynthetic organisms. The potential for this form of carbon management strategy has rarely been quantified, and it has yet to be engaged for widespread climate mitigation. I have written a review of the necessity to manage biosphere carbon flux. The bottom line of this analysis is that because emissions generated by the biosphere are accelerating, we have no choice but to engage in global-scale ecosystems management. Such efforts naturally include enhancing ecosystem carbon capture and sequestration.

It is striking that managing biosphere carbon flux does not require new, highly engineered infrastructure. Most of the tools and processes for managing the living and dead biomass of the planet are already in place. In many cases, these tools are actively being used to maximize the economic value of natural resources. The Intergovernmental Panel on Climate Change Fifth Assessment (IPCC AR5, Working Group III, Chapter 11) reports that agriculture, forestry, and other land uses (AFOLU) account for about a quarter of all anthropogenic emissions. The AR5 details mitigation and adaptation strategies for these sources of emissions.

Forestry and agriculture are examples of human-managed systems in which the methods for management of carbon flux have been identified and can be substantially ramped up to maximize carbon capture. The United Nations REDD+ program is intended to reduce the emissions from deforestation and forest destruction, but its enormous side benefit is the maintenance of old growth forests with arguably the greatest potential for carbon uptake. Carbon farming is gaining considerable respect in the scientific community as a powerful tool for managing global carbon.

In contrast to such managed systems, developing the ability to manage natural systems, for example tundra, will require continued research. In contrast to technology-intensive approaches, targeted research on ecosystems uses existing methods and models. Because it draws on universal principles of ecosystem form and function, such research is likely to rapidly yield approaches that can be applied widely.

The economic argument for using the biosphere for carbon capture and sequestration is compelling. Heavily forested and agricultural regions such as Maine, the southeastern US, and the western slope of the Cascades would see significant and sustained financial returns in an economy where carbon management is monetized and distributed rather than centralized. Only a relative few investors and developers stand to benefit from geoengineering and centralized carbon capture and sequestration. Geoengineering may be globally dangerous. Instead, I have proposed that government and industry incentivize the creation of a knowledge economy to drive adaptation and management of carbon resources.

There can be little doubt that we are out of time. Failure to move decisively within the next decade to dramatically curtail emissions by midcentury will have devastating consequences for civilization. Energy from wind, water, and solar have been demonstrated as cost competitive and capable of meeting our energy needs. Thus, rather than continued reliance on a deadly polluting energy source such as coal, it seems far saner to invest in renewables while managing biosphere carbon flux. Holding global warming below the rather arbitrary 2˚C guardrail will be impossible without such worldwide mobilization, and achieving the more restrictive goal of 1.5˚C is utterly dependent upon rapidly scaling up CO2 removal.

As we find our way forward, we should not be swayed by big technology fixes. Managing the biosphere is not only more effective, but by getting our hands dirty and boots muddy we can build an enduring economy. As we stand at this crossroads in human evolution, rather than subdue through brute force, we must adopt a measure of humility and a science-based respect for nature.