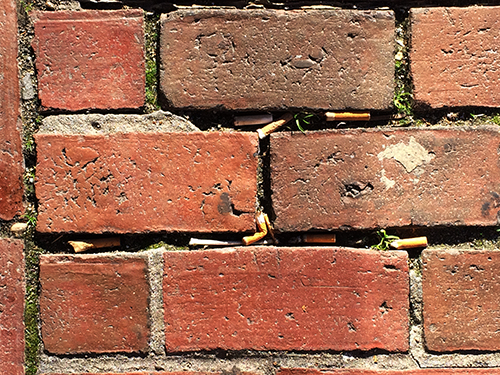 Cigarettes are the most commonly littered item in the United States. Estimates show that as many as 42 trillion cigarette butts are discarded as litter each year, and 32 percent of the litter at storm drains is from tobacco products.

Cigarette litter doesn’t just go away. Many people believe that cigarette filters are biodegradable, but they are in fact made of nonbiodegradable plastic. That plastic and the 400 toxic chemicals, including lead and arsenic, that are trapped within cigarettes can persist in the environment where they then threaten water quality and the health of people and wildlife.

Filters have led to more smoking and lung cancer. Evidence suggests that filters on cigarettes do not make smoking safer for the consumer—and instead the filters may have led to an increase in lung cancer since they were introduced in the mid-1960s. Since then, lung adenocarcinoma rates paradoxically increased relative to other lung cancer subtypes. The reasons for this are likely to be because the filter alters tobacco combustion, increasing smoke toxicants; allows smokers to inhale more smoke to maintain their nicotine intake; and causes a false perception of lower health risk. Independent researchers have suggested that the Food and Drug Administration consider regulating filter use, including a ban on filters all together.

Cleaning up city streets creates a sense of community pride. Cigarette butt litter prevention is a noncontroversial campaign that brings residents and businesses together to promote involvement and pride in a program that makes the city a healthier, more enjoyable place to work, live, and play and visit.

Cigarette Litter Prevention Programs work. When polled, more than 80 percent said that they wouldn’t toss their butts on the ground if there were disposal containers available. People don’t want to litter. Give your community the chance to prevent littering and adopt your own Cigarette Litter Prevention Program. In its first year alone, Portland’s cigarette litter prevention program collected more than 340,000 cigarette butts that may have otherwise been littered and washed into Casco Bay.